Last weekend, the wee Scottish city of Stirling tasted blood – and not for the first time. The crime festival Bloody Scotland took place for the sixth time since its inauguration in 2012 and drew a large crowd of authors and readers passionate about crime fiction (among them bloggers, booksellers, agents, publishers, teachers – and a funny old man with a champagne glass hidden in his vest).

The festival’s events started on Friday morning with creative writing classes and discussions, but the official opening took place in the evening at Stirling Castle. The atmosphere was very festive and at the same time very cheerful! After some welcoming remarks, the official launch of the festival’s short story collection and the proclamation of the prize for best Scottish crime book of the year (see below), the crime authors – with Denise Mina, Val McDermid and Ian Rankin at the head – led about 500 of us in a torchlight procession through town and to the next venue. 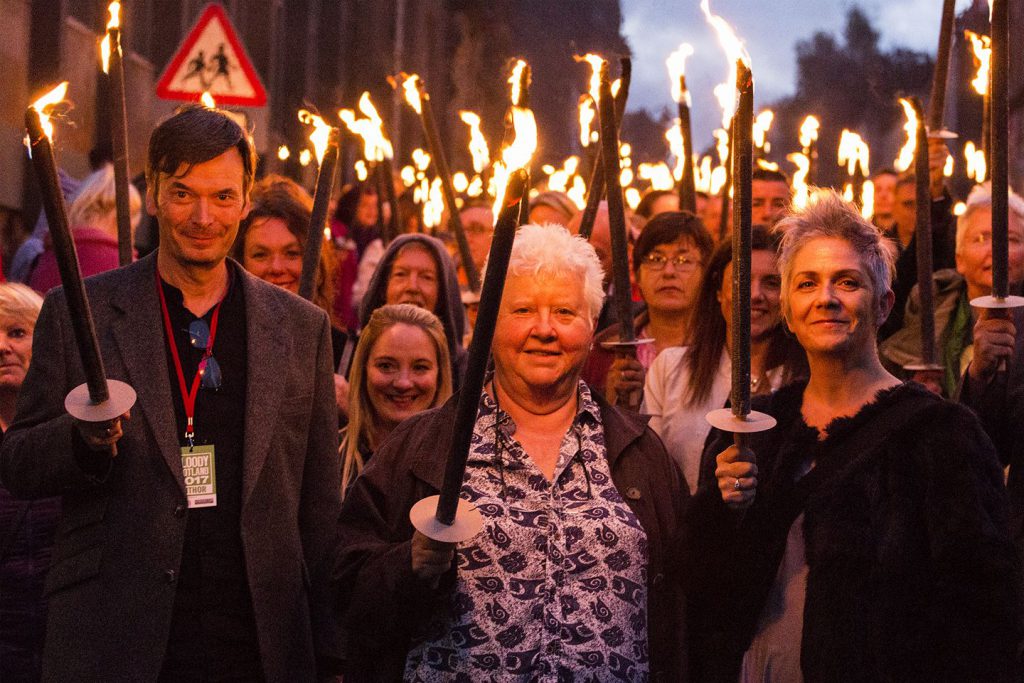 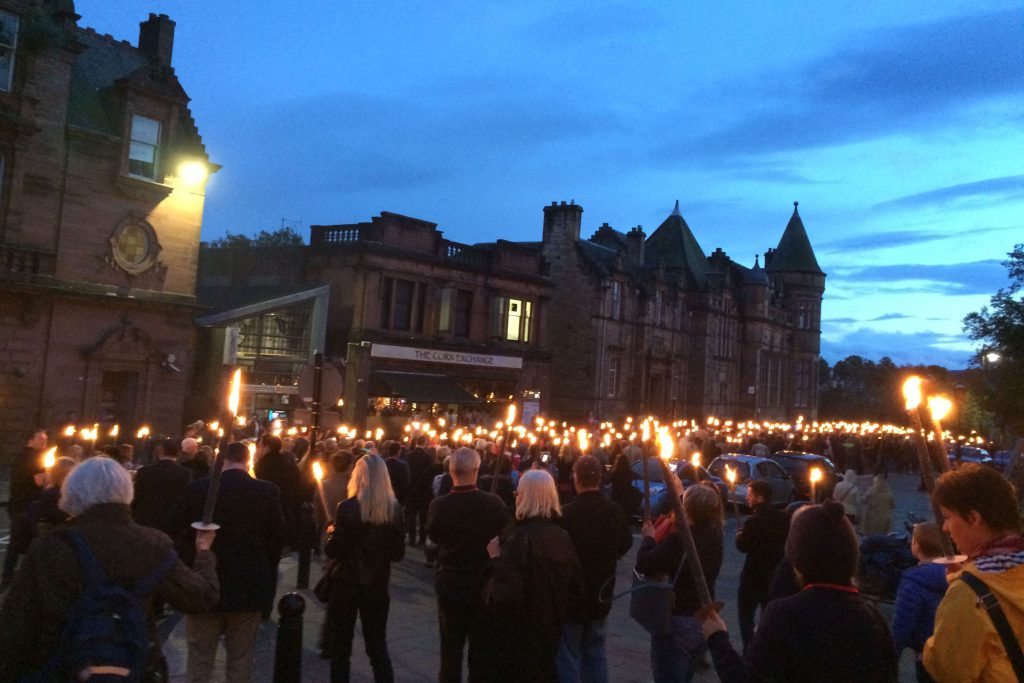 At the Castle, the winner of this year’s McIlvanney Prize, the Bloody Scotland prize for best Scottish Crime book of the year, was announced. It went to… drumroll… Denise Mina, who was our Literary Field Kaleidoscope guest in December last year! In Berlin, she read from her then unpublished novel “The Long Drop”, based on the story about the serial killer Peter Manuel, who shocked Scotland in the 1950s. Denise Mina was awarded for this very novel and she is the first woman to receive the McIlvanney Prize – in a year that saw more entries to the prize than ever before. We extend our warmest congratulations! 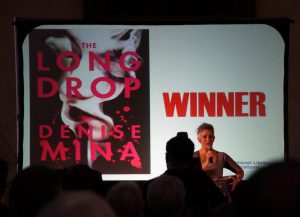 And the winner of the 2017 McIlvanney Prize is: Denise Mina with her novel “The Long Drop”, photo: SvL 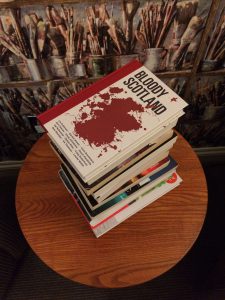 This year’s festival also had a premiere: for the first time, the organisers also published a book with short stories: twelve authors – Lin Anderson, Gordon Brown, Chris Brookmyre, Ann Cleeves, Doug Johnstone, Stuart MacBride, Val McDermid, Denise Mina, Craig Robertson, Sara Sheridan, E S Thomson, and Louise Welsh – contributed to this breathtaking collection. Not wanting to give away too much, let me just say that the stories I have read so far sent shivers down my spine, but equally left me with the warm feeling of satisfaction and revenge… More than once, I nearly missed my stop on the U-Bahn. If you’re interested, hurry up, the book appears to be selling fast!

Ian Rankin and 30 years of Rebus 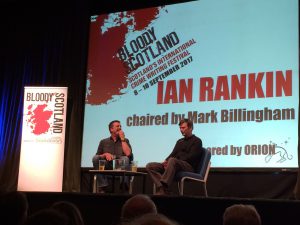 One of the two events I attended was Ian Rankin’s session with crime author and comedian Mark Billingham. It was good fun and they shared a couple of stories from their work as crime authors (e.g. how a remark in Denise Mina’s novel about the “death row journal” inspired him to write a new piece), their love for using music in their characterisations and their feelings towards TV adaptations (or rather the question whether they should watch it or not). This year also marks the 30th anniversary of Rankin’s character John Rebus which led the two to talk about possible regrets. Among his (short) list was that he believes he gave away too much of Rebus’ backstory in the first book “Knots and Crosses” – and he made him too old. But Rankin also found out that while readers can be very preoccupied about whether a certain bar in Edinburgh has a foot rail or not (it didn’t, the owner installed it after the novel and allegedly sent Rankin the bill), they don’t seem to worry too much about the continuity of time. “Stop the clock, I just want the character” – that’s what readers and publishers seem to think according to Rankin. In any case, he brought Rebus back via a cold case unit. And allegedly, an MSP even jokingly asked in Parliament whether a continuation of the Rebus novels might have been the reason why the retirement age for police officers was changed in real life Scotland! Rankin is a pro: he entertained us and promoted his backlist and upcoming book. Apparently, he will be returning to his “folder of ideas”, coming up with a new novel in 2018… 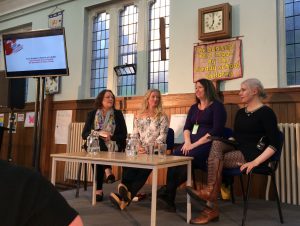 The second event I attended was an all-female panel with Anne Randall, Helen Fields, SJI Holliday, and AK Benedict. To my shame, I have to admit that, up to now, I didn’t know any of them, but I was intrigued to find out more about them and the “unstoppable rise of women crime writers” announced in the programme.

I really enjoyed the talk – not least the part about field studies of how you can fit your spouse in a suitcase and what this does to the gravel of your driveway (Helen Field). And I enjoyed how AK Benedict combines “crime, horror and weird things”, how SJI Holliday explores the dark side of Christmas, and how Anne Randall links her writing to her work experience as counsellor. And while Anne Randall described crime writers as “fixers” who are constantly looking for a resolution, Helen Fields seems to enjoy breaking things much more – or fixing them for now just to have something darker come up later…

As much as I enjoyed the discussion, I have to admit I expected a bit more of a political, feminist discussion. I was curious to hear a bit more about female crime authors in the UK’s literary field and I don’t believe that the playing field is as level as the panellists claimed. It seems to me that there is still an imbalance of attention and perspectives – and Denise Mina was, after all, the first woman to win the McIlvanney Prize… In Germany, at least, male and female crime writers are not treated equally as collectives such as “Herland” or “Mörderische Schwestern” (“Murderous Sisters”) remind us time and again.

“A Killing at the Box Office”

Unfortunately, my time at the festival was limited, but this short glimpse made me want to come back. I thoroughly enjoyed the atmosphere and the great variety of events and authors – well known ones and those to be, from Scotland and other places around the world – there was even a quiz show, singing and a football match between England and Scotland (which Scotland won 6:3 by the way).

The festival, which was started in 2012, is now a well-established date in the British literary calendar. 2017 was another big success: The festival, according to The Herald, made “a killing at the box office” with record ticket sales and an audience of about 8,500.

Next year’s director Bob McDevitt said to The Herald: “Although Bloody Scotland 2017 has been the biggest yet in terms of authors attending and tickets sold it has retained an intimacy and a genuine feeling of a group of friends gathering together for some quality banter.” And he is right. Bloody Scotland really is worth visiting. So save the date: next year, Bloody Scotland takes place 21-23 September 2018! And for now, to quote James Crawford’s introduction: “read the bloody book”.