Gesa Stedman rounds up the most recent news – for once, with a German focus. The German literary field has been rocked by two events which have generated an unprecedented amount of news and debates in newspapers and social media.

This is going to be an unusual post, as it will focus on the German literary field, and not on the British one, or any of its regional off-shoots.

It is rare that book events hit the news to the extent that they have in the past few weeks in Germany. Social media and the broadsheet newspapers, as well as radio shows, are full of two related debates. One focuses on the translation of Amanda Gorman’s poem for Joe Biden’s inauguration, The Hill We Climb, the other concentrates on the German socialdemocratic approach to the discourse on identity, intersectionality, racism, and minority rights.

These are not essentially German debates, of course, but Germany is sometimes late late in picking up on developments, or rather doing it publicly and in mainstream media outlets. Some of these developments are taken up faster in other countries with a longer and more confident history of (im)migration. Whether this will be more than a publishing trend remains to be seen – I have my doubts, unfortunately, but then, I am always sceptical but will be happily surprised if this is a harbinger of real social change.

Amanda Gorman’s performance at Biden’s inauguration was widely commented on in the international and German news. Some unusually fast German English teachers even used the text and the occasion to teach German school children, presumably American politics rather than poetry analysis, but perhaps both. 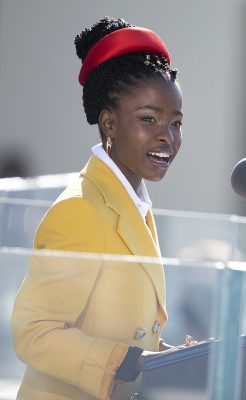 Review pages of newspapers commented on the poetic text, on the performance itself, and on the subsequent modelling contract which Gorman is said to have signed in the days following the inauguration. While the comments were positive in the newspapers that I read – liberal, left-leaning ones – the news has become more mixed with the report that her designated Dutch translator had handed back the job after her role as a white, if non-binary, writer who is not a trained translator, was questioned on social media.

The storm broke fast and with predictable consequences. I must admit that when I first read the headline I also thought: this is nonsense! Just before, I had heard a prominent Black writer apologetically comment on the fact that she had written about something she had not experienced herself and started to wonder, probably like many other people, what was going on. Obviously, if you can only write about what you have experienced yourself, no historical fiction is possible. Fortunately, headlines only provide the short-hand version of the debate, which is much more complex. Translators and writers and publishers have pointed this out in the last few weeks, never with greater finesse and perception than on the pages of Süddeutsche Zeitung (link to newspaper https://www.sueddeutsche.de/kultur/amanda-gorman-uebersetzer-identitaet-1.5228503?reduced=true last access 31 March 21) – with one exception, but more about that later. What emerges is a nuanced debate about access to the literary field, the Dutch one in this case.

Who gets the jobs, and why? In a country like the Netherlands, which has a long colonial history and therefore a long-standing Black community, it is more than justified to take a look at structural aspects of access to opportunities and jobs within the literary field. In other words, it is NOT about essentialist identity politics, although that may have also played a role (I hope not!) but more about the factors we have been writing about for a long time on this blog. The multi-faceted questions of access, of power, AND of representation – in that order – are spelled out in Anamik Saha’s and Sandra van Lente’s report on how to diversify the British literary field (link https://www.spreadtheword.org.uk/projects/rethinking-diversity/ last access 31 March 21). To point the spotlight at these questions for other countries – Germany for instance – is highly relevant.

What emerges is a very recent discovery, at least in Germany, namely, that there are writers, translators, publishers who are working against discrimination and for wider access of PoC and many other people who are not white, middle-class, and – in Germany – preferably male. Which brings me to the one exception I would like to make regarding the overview of voices by translators and publishers documented by Süddeutsche Zeitung. One of the translators, an older white man and a very high-ranking translator, used the word “Das Fremde” (“the foreign”) to designate what literature’s task is, namely, to familiarise us with worlds and perceptions which are unfamiliar. I thought the usage of this term very problematic, as it implies that Amanda Gorman might be “foreign”. She may be – as an American – to some Germans. But implying that her experience was “foreign” in her own society just turns the light on what apparently quite a few older white people seem to think: namely, that anything that isn’t white is “foreign”. That got me seriously worried.

What cheered me up, briefly, was the news that this book spring in Germany is the most diverse ever and that all the publishers’ lists are full of titles written by people whose surnames are not Schmidt, Walter, Dörfler, Maier, Feldmann or whatever.

However, this was only reported where you might expect it, namely, on book podcasts and book pages.

The other event which has shaken the literary pages and broadcasts of newspapers and public service broadcasting is the reaction of some senior socialdemocrats to actors collectively outing themselves – again in Süddeutsche Zeitung – a subsequent TV debate with a highly controversial and reductionist comment by one of the guests which I really don’t want to repeat here, it doesn’t deserve it, and general articles on identity issues, migration, racism, LGTBI+ discourse etc. The debate has heated up, in some respects like the ongoing row over JK Rowling and her stance on trans-issues versus feminism in the UK. But again, if you trust the headlines only, worrying levels of non-complexity emerge. If you then go on to read longer interviews, debates between seeming opponents (link: https://www.sueddeutsche.de/kultur/identitaetsdebatte-lgbtq-gesine-schwan-ulrich-matthes-interview-1.5233613?reduced=true last access 31 March 21) and portraits of individuals in question, it emerges that the differences lie not only in substance, in the use of words or concepts, but rather in the terms of debate.

These terms seem to have shifted. As an expert on emotions discourse, this does not come as a surprise to me, as “affect”, as the Americans like to call it, has been one of the key concepts as well as grounds for justification in many areas of society in the past two decades. But it does surprise me that the passion, the vehemence, the raw feelings, are only now emerging as a legitimate point of debate. In other words, behind the bluster, the accusations, the stupid, reductionist Twitter and newspaper debates (I wish Twitter had never been invented, as well as some awful newspapers) lies a crucial question: on what grounds does one have a discussion? Based on clear concepts and analysis in the interest of clarity, and ultimately, social and cultural and political change? Or on the basis of raw feelings only, which of course need to be acknowledged in their rawness before any consequences can follow? It is interesting to note that the emotional response comes from fellow migrants/queer people/younger people, rather than from the white, often male, majority writers who seem to find it hard to understand just how privileged they have been, and consequently, to understand why other people are boiling over with rage.

I hope, with many of those involved, that one can acknowledge both the raw feeling and move towards real change, that emotion and meta-discourse are not mutually exclusive. What the best way forward might be, I don’t know – except that essentialism leads us nowhere, nor does lack of empathy, sensitivity and sitting on a high horse complaining about “all the fuss”. I am well aware that the responsibility as a white, left-wing, female, middle-class academic lies just as much with me as with the awful, white, middle-class, old white translator whom I have always experienced as incredibly arrogant and full of himself (sorry, this is personal but he is so self-important as to efface the writers he translates, which I think is objectionable in translators, reviewers, academics, and critics).

Academia has quite a lot to answer for, as socialdemocrats as well as fellow lefties such as Caroline Furest tell us in her recent book which is being reprinted and was therefore inaccessible to me except via its reviews. If we talk about representation all the time, and not often enough about access to power and social inequality, we will all loose out. But then, if language and concepts are your job, that is what you start with perhaps. The main thing is not to end with language and representation, but to look beyond that, and in Germany in particular, not to forget about class. And most important of all, of course, is not to allow the right-wing commentators such as the German AFD party and their willing supporters in right-wing newspapers and broadcasts to divide the left and have a field day with anyone who is left of centre.

That being aware of all these facets of the debate and acting upon them is often tricky, I have found in my own academic practice when trying to win PoC authors for paid readings or academic articles. So if anyone feels they would like to take over this blog for a while, please contact us! We are more than happy to share this space.

P.S. Here is a link to Sharon Dodua Otoo’s post on the Gorman debate and what this has to do with racism, and the literary field:

Amanda Gorman’s poem The Hill We Climb was published in a German translation in a bilingual edition by Hoffmann & Campe on 30 March 2021. The text was translated by a team of translators. Link to publisher: https://hoffmann-und-campe.de/products/777-the-hill-we-climb-den-huegel-hinauf-zweisprachige-ausgabe (last access 31 March 21)

A review of the French original in the German left-wing weekly newspaper Jungleworld can be found here: link https://jungle.world/artikel/2020/17/die-plage-der-sensibilitaet (last access 31 March 21)

The more right-wing press comments on her book can be easily found if our readers wish to pursue them. I don’t want to provide them with more of a platform in this context. A review of the book will follow in due course.