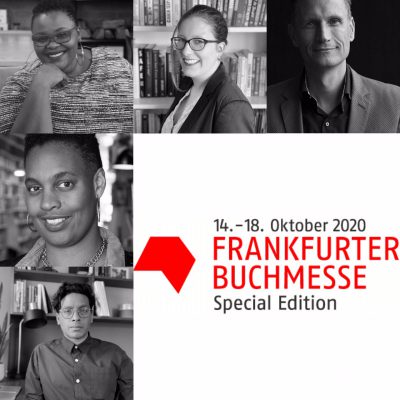 Frankfurt Book Fair created a “Special Edition” in 2020 and went completely online, allowing me (during the last few weeks of my pregnancy) to participate in a panel called “Improving Diversity in Publishing: Who Can Lead the Change Process?” with the following speakers, chaired by Dr Anamik Saha, Senior Lecturer at Goldsmiths, University of London and Co-Author of our “Rethinking ‘Diversity’ in Publishing” Report:

At some point in the next week(s), our conversation will also be available online in the Frankfurt Book Fair ‘Mediathek’, so if you’re interested, keep an eye out for their announcement.

(Just received an update (28 Oct 2020): The recording is now available via the following link and you need to register for a MyBookFair account in order to access it -> https://www.buchmesse.de/en/timetable/session/ipa-fbm-improving-diversity-publishing-who-can-lead-change-process)

Diversity is Not a Cherry on the Cake

Michiel Kolman started us off with a short presentation and shared figures about the workforce in UK and US publishing. Later on, he also shared how difficult it is to find reliable data on workplace diversity in other literary fields and how the “UK Publishing Industry Diversity and Inclusion Survey” compiled by the UK Publishers Association (link to the survey below) was one few detailed examples. One of the observations the workforce data led to was that diverse teams were more productive and there was less staff turnover. But Michiel also warned to see ‘diversity’ as a “cherry on the cake”: “If you don’t embrace diversity, there is a penalty to pay.” Companies with a more diverse workforce perform better, companies with monocultural staff perform worse.

At the same time, he observed that the publishing industry was often not really ambitious in setting new goals (when you think that most of the UK’s publishing industry is based in London, that London has a ‘BAME’ population of about 40% and publishing is still 86% white and the hiring goals are often limited to new hires…) About the German side he said: “The Boersenverein listened politely, but I didn’t see them react right away.” I do hope this is going to change. One ray of hope might be a conversation that Dr Mahret Ifeoma Kupka had with Karin Schmidt-Friderichs (chairwoman of the Boersenverein des Deutschen Buchhandels) in Kupka’s brilliant film essay on “Black Stories” (that actually deserves its own post) (link to the video).

I had the opportunity to share our qualitative approach and some of our results (and Anamik was so kind to plug my German translation of our report which is available here: www.rethinkingdiversity.org)

Many of our findings were linked back to this one problem: publishers and booksellers imagined their audience as white and middle-class. And this has implications for the whole acquisition, publishing and bookselling process. As a result, writers of colour need to be seen as having value to this demographic and they are packaged accordingly. While this does afford some writers of colour opportunities, it can also lead to white-washing or exoticisation. It also ignores how some writers of colour want to write to their own communities.

In addition, assumptions about what these white, middle-class readers want to read results in the fact that writers of colour were not given the same freedom as their white colleagues. There were fears over their quality, ‘interesting’ ideas about what stories they could authentically tell, and fears that their stories would be considered too niche.

So we came to the conclusion that “until the publishing industry diversifies its audience, writers of colour will always be ‘othered’”. Our recommendations for the finding of new authors and readers include cooperations with writing development organisations like Spread the Word, Writing West Midlands and others because they have created programmes to foster new writers and they already have the relationships with communities and they know how to reach them – beyond the obvious channels and beyond the white middle-class. 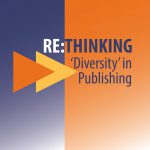 Here is a link to a 2-page summary of our findings: link to the Executive-Summary (pdf)

When Anamik and I say that we want to rethink ‘diversity’ and move away from a focus on the workforce, we mean that it’s not enough to ‘just’ hire more diversely and then don’t address inequality at all or leave the task to those of your staff you come from marginalised communities. And time has shown that monocultural teams just do not publish as diversely as we readers deserve it. Not just in the UK – in the last couple of weeks I had conversations with activists, ‘book people’ and academics in Germany who shared similar stories about Black and POC authors in Germany who had to explain and defend the relevance of their narratives to publishing teams who, again, had a very narrow idea of their audience and ‘just didn’t get it’. Sharmaine said on this subject: “stories should be diverse […] if your workforce is not diverse, your stories won’t be.”

When Anamik asked Thabiso Mahlape, founder of the South African indie publisher Blackbird Books, about the difference in South Africa where Black authors are the majority, not the minority, she conceded that what she found scary about our findings was that they also rang true for South Africa. Maybe this is little surprising that a country that suffered from colonialism and Apartheid, but I found it still shocking.

Thabiso went on to explain that the real change should come from the publishers who earn the biggest share of the money, but the reality is that the most visible books with the most money behind them are written by white authors – and that the mainstream media also cater for white people.

In addition, she also shared her observation that in South Africa, too, many people just want to be seen to publish more diversely – while at the same time not really making a difference and not investing the same resources. They want “Black writers with social currency”, i.e. the safe bets, not the ones where you need to take a risk. She emphasised the importance of seeking out and publishing new voices where there is lack of representation. “For me it is really about finding that new talent and nurturing it,” she said. “Don’t chase after the big names—they’ve already made it, they’re there, they can get a deal anywhere else. Find talent to nurture and allow them the possibility to dream of a writing career.”

Sharmaine Lovegrove, publisher at Dialogue Books (Hachette UK), shared some more insights into how the conversation in the UK went on in the last months. Sadly, she said, a large part is still centred on white guilt and white fragility. But what really takes the cake for her is the impertinence with which the literary establishment dares to judge the storytelling of Black and Asian British people as inferior or less relevant. “If you come from an African or Asian background, you literally come from thousands of years of storytelling” – and she reminds us of how central storytelling was to their ancestors, how they have told stories to survive and how these stories and techniques have survived over the centuries.

At the same time, Sharmaine also saw some signs of hope. The recently created Black Writers’ Guild – link to their open letter to the industry below – is already working together with publishers, helping them to improve their work, but also holding them accountable.

Why do we need Academics?

One of Sharmaine’s questions really stuck with me. She asked us how it had come to this, where academics need to tell editors to go out and find authors who are different to who they are—in essence, how to do their job. I wish I had said cleverer stuff in the actual conversation. To be honest, before we carried out all those interviews, I wasn’t even sure I understood what many decision makers in publishing didn’t seem to understand. Many of these well-intentioned publishing people just seemed so stuck in the system, governed by economic pressure from the top (in particular those conglomerates who could actually afford more cross-financing), so glad they finally arrived at their positions, not wanting to rock the boat – or not able to see what needs to be questioned. Our report touches on a number of questionable assumptions and their impact on authors of colour.

But Thabiso was the one who hit the nail on the head: it’s because they’re so used to centring whiteness, because “whiteness continues to be centred in all aspects of publishing” that they actually “need to be told to decentre themselves“. And again, this includes all parts of the acquisition, publishing, and bookselling process.

It was Sharmaine who in the end said that editors needed to be intellectually curious and work beyond trends. And also stick with authors who are not immediate bestsellers. I just want to include her shout-out to Simon Prosser here, who has been Bernardine Evaristo’s editor for two decades now. Sharmaine asked: “Are we prepared to find that talent and foster it for 20 years?” She describes herself as a “creative project manager” and diagnoses that, unfortunately, “creativity and curiosity are often what’s missing.”

Unsurprisingly, we all pretty much agreed on the importance of diversity and how it is necessary that inequality is addressed. It seems as we were part of a conversation that is widely had at the moment I just hope it’s going to be more than just talk, but as Sharmaine said, there are some ways to support publishers and booksellers in their change process and hold them accountable at the same time.