Before we go on a summer break, we would like to draw your attention to the #indiebookchallenge. Introduced in March 2018, it offers weekly challenges around books made by independent publishers. You can join in any time – why not over the summer break?!

The “indiebookday” (link to website) was established in 2013 in German-speaking countries and then spread to the UK, the Netherlands, Italy, Portugal and Brazil. The indiebookday in March is an occasion to celebrate books published by independent publishers – in bookstores, readings, at home or online.

In 2018, the “indiebookchallenge” (link to website) – after an idea from Sarah Käsmayr, Maro Verlag – was introduced. The challenge sets little tasks for each week of the year, to be completed by reading books published by independent publishers that meet the criteria of the task. However, you can also just go see what your local bookstore or library has in store for the weekly challenge, or recommend books that you deem fitting. I think the aim is to talk or write about these books, even if you don’t manage to read them all.

Many publishers, literature venues, bloggers etc. offer their own recommendations for the respective week(s) and the initiative’s website lists a number of book people who each present a week’s task (e.g. the indie AvivA Verlag presented the first challenge: books with blue covers).

The aim of the indiebookchallenge is to encourage people to ask for indie publishers and books, create more (media) attention for indie books and celebrate the many incredible publications off the beaten track. Sarah Käsmeyr’s idea was discussed during a meeting of indie publishers in Düsseldorf with the Arts Foundation in North Rhine-Westphalia earlier this year. One of the results of this meeting is the “Düsseldorf Declaration”. Its aim is to introduce arts funding for independent publishers (similar to other forms of arts funding that already exist, e.g. for some theatres) and develop a strategy to show a general audience that they don’t want to live in a world without indie publishers. So the indiebookchallenge fits right in. As this challenge goes on for 52 weeks, this promises a longer lasting effect.

So what do independent publishers and independent bookstores think about it? We asked some in Berlin and received answers from the following three:

The first comment comes from Britta Jürgs, founder of the indie AvivA Verlag and chair of the board of the Kurt Wolff Stiftung, a foundation that represents the interests of independent publishers who publish in German. She got on board with the idea right away – she presented the first challenge, books with a blue cover – and even started a new section on her website to write about indiebookchallenge titles. She received a lot of positive feedback and even saw a rise in people’s interest from the start of the initiative until now: her blue books already got a lot of attention, but her book Mädchenhimmel received even more when it was presented during last week’s challenge as a book that has been on the “Hotlist” (list of the “best of German indie publishing” (10 titles out of a 30-title longlist, chosen by a board), annual award (public vote) presented at the Frankfurt Book Fair). So this could be a synergy effect of the various indie initiatives. Britta Jürgs told me that she believes in “sustainable subversion”: “The more we talk about indie publishers, the more people will be aware of us indies. Furthermore, it’s always a good idea to draw people’s attention to books. In any case, something will stick.”

Friederike Zöllner, owner of the indie bookshop Buchlokal in Berlin Pankow (read our interview with her here), has a different approach to these kind of initiatives and told us that the indiebookchallenge had no effect on her shop whatsoever. She mentioned that they refrained from posting on social media platforms partly because the new General Data Protection Regulation (GDPR) created legal uncertainty. They even shut of their social media profiles down. But, more importantly, her clients are simply not into these events and campaigns, even though they are progressive and open-minded: “Our clients value our large and diverse stock from independent publishers. They enjoy that we are a tranquil constant in the increasing hustle and bustle and race against one another.” 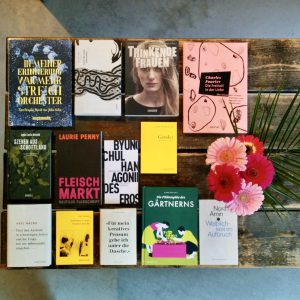 In a different corner of town, Maria-Christina Piwowarski runs ocelot – not just another bookstore. She reports that her customers have shown interest in the indiebookchallenge-themed displays and their feedback about the weekly recommendations has been very positive.

See and judge for yourself if the indiebookchallenge might be something you enjoy – or even something you might want to export to some other literary field.

But for now, enjoy the summer break and find us back at the end of September!