InterKontinental started off as a literary agency and organized the first African Book Festival in Berlin in 2018. Since then, they have also opened a bookshop that specialises in African literatures and literature from the African diaspora. In 2022, the multitalented team launches their new independent press: InterKontinental Publishing House for African and Afrodiasporic Literature. Venice Trommer, publisher, translator and bookseller, answered our questions for Literary Field Kaleidoscope.

Dear Venice, thank you very much for joining us for this interview. So, InterKontinental started as a literary agency, then launched the first African Book Festival in 2018, added running a bookshop to the profile later that year and is now starting its own indie publisher in 2022. Can you please tell us how the idea of starting your own publishing house and the bookshop came about? 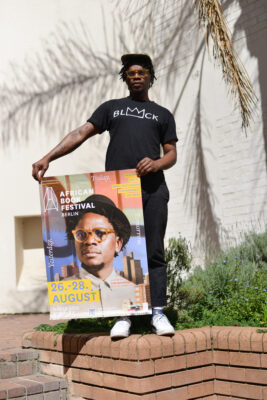 The idea for a book shop came about shortly after the first African Book Festival in 2018. We had commissioned a local book shop to run a book stall at the festival. We provided the list of books necessary and they were reluctant to order high quantities, were unable to provide some of the books, and acquiring them directly from festival authors, who brought them back from South Africa or Nigeria posed a challenge. After all, if the aim of the festival is to enhance the visibility of African and Afro-diasporic writers in Germany, this goal cannot be reached in the long run, if their books are still hard to come by. So, the solution was taking care of book sales at future festivals ourselves and to look for a space that could combine an office and a shop.

Similarly, the publishing house was born. On the one hand, Stefanie Hirsbrunner, one of my partners, had the idea for an essay collection on interracial (love) relationships. On the other hand, we had a lot of books in stock that were dear to our hearts, but we were waiting in vain for their German translations and decided to do something about it ourselves.

What do you want to do with your new indie press? What kind of books and authors are you interested in?

As with the African Book Festival and the focus of our book shop, we are a publishing house for contemporary African and Afro-diasporic literatures. We publish fiction as well as non-fiction. For now, the forthcoming novels are by anglophone African writers, but in the future, we envision an inclusion of translations from languages other than English, of the Diaspora, of Afro-Caribbean, Afropean, Afro-German voices and a true embodiment of the name: InterKontinental.

Can you please tell us a bit about your role within InterKontinental?

Since we are quite a small team, mainly my partners Karla Kutzner, Stefanie Hirsbrunner and I, everybody is more or less involved in every aspect of our work, although some responsibilities get distributed quite naturally due to personal preferences and abilities. I actually started at InterKontinental as an intern in 2017 and by now I’m co-owner. I am mostly in charge of the book shop, have produced our podcast series “New Daughters of Africa” hosted by Panashe Chigumadzi, I have translated one of the novels and some of the essays we’ll publish in August, have been doing PR work for the festival and now also the publishing house, moderations at events and readings, and a whole lot of organising in the background.

This sounds like a lot of work, but also a lot of fun and opportunity to accompany authors and their books for a long part of the way. What are some of the challenges of ‘wearing so many hats’ and what do you find most rewarding?

It’s a lot of work indeed, but I wouldn’t have it any other way. Of course, I often wish there were more hours in a day, but getting immediate feedback from customers at the book shop or visitors at the festival, or hearing that a writer got a publishing deal in Germany after the festival is a great reward. I have always wanted to translate, to facilitate literary events and book shops are paradise to me, so I’m actually living the dream. I love the variety of our work, it sure never gets boring. It’s very rewarding to mould an idea into shape and actually see it come to fruition. I would never have had the courage to do any of it without my partners Karla and Stefanie. We work great together, really know we can depend on one another and always have each other’s backs.

Which authors and books did you choose for your launch? And can you tell us a bit about the acquisition and publishing process, please? Was it challenging as a new indie press to acquire the rights? What do your authors say why they chose you?

Our inaugural publishing programme includes four books: Die erste Frau (The First Woman) by award-winning Ugandan writer Jennifer Nansubuga Makumbi, a wonderfully crafted magically feminist coming-of-age story. The novel was translated by Alakati Neidhardt. We publish the novel Blackass by A. Igoni Barrett (translated by me); it’s a witty satire on race inspired by Kafka’s Metamorphosis. Zerstreuung (The Scattering) by Lauri Kubuitsile and translated by Ivana Maurovic and Maria Meinel is a historical novel that addresses the horrors of German colonial history in Namibia. And we also publish the bilingual essay collection Kann das denn Liebe sein? | Could This Be Love? containing 15 personal essays on interracial relationships by authors from various walks of life. The essays were translated by Stefanie Hirsbrunner, Venice Trommer, Charlotte Wührer and Michael Kegler. 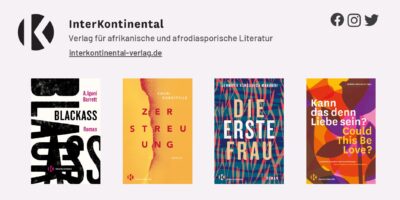 Of course, as a new publisher with no prior publications to boast, some writers and agencies were sceptical to work with us, some other licences we simply couldn’t afford. But even though we are new in publishing, InterKontinental and the African Book Festival are already well established in the cultural scene. A. Igoni Barrett and Jennifer Nansubuga Makumbi for example were guests at the African Book Festival in 2018. In their cases, the personal relationship established back then and their positive experience at the festival have sure helped them to trust us. What we (still) lack in reputation as a publisher, we make up for by really putting all our efforts into promoting our writers also using the connections established through the book shop and the festival.

Did you create your own covers for the translations? Can you share a bit about the process and the results?

As much as we like to say “Don’t judge a book by its cover”, we all do. We wanted to create books that are visually as appealing as they are in terms content, style and characters and that catch your eye even in a crowded book shop. All four cover designs are original. The illustration for the essay collection Could This Be Love was made by the renowned communication designer Prof. Yang Liu. All other designs are by graphic designer Ursula Steinhoff. She nailed the cover for Blackass at the first attempt. With the other two, it was a bit more of a back and forth. She really dove deep into the texts to come up with visual ideas that actually suit them and we are very pleased with the results.

What is your strategy to introduce your books to your audiences and how do you avoid falling in the ‘exotisation’ trap?

The covers do play a big role in that regard. There were certain stereotypical images that we wanted to avoid, and our designer absolutely got that. The old trope of the acacia tree at sunset for example was an absolute no go for us. Lately there has been a trend of (Black) women’s silhouettes on the cover of any novel by a Black woman writer and/or with a Black female protagonist (not just in German publishing). While one could argue that these designs are a way of representation and identification for Black female readership, it can also be viewed as a means of exoticization. We went for more abstract designs instead, that still illustrate an aspect of the story.

What are your hopes for the festival and the launch of your press? And if you had a wish, what would you wish for?

While working on the translation of Blackass, I actually had a dream about it winning the International Literature Prize of Haus der Kulturen der Welt [laughs]. No, but I really hope that the press and readers will enjoy and love the books we publish as much as we do. And of course, I wouldn’t object to any of the books winning prizes. In my humble opinion, they absolutely deserve it.

As for the African Book Festival, I hope that there will be no more closed borders due to Covid and that all invitees receive their German Visa (which is unfortunately not a given), and that it will become an amazing experience for the participants and audience alike. After all, it’s our biggest festival yet with more than 50 participants and an incredibly diverse programme on four stages. Our new location at Napoleon Komplex with its versatility gave curator Lidudumalingani the opportunity to include a concert by South African superstar Bongeziwe Mabandla, a party, indoor as well as outdoor stages, events catering to children and parents on Sunday, various book specials, interesting panel discussions and an interactive round table discussion on African authors in European markets in collaboration with Brittle Paper. If I had a wish, it would be being everywhere at once and not missing out on any of it.

Thank you very much and all the best!

Venice Trommer studied African Studies at Humboldt University in Berlin. She reads, sells, translates and publishes books – preferably by writers from Africa and its Diaspora. She reads in and translates from English, French, Portuguese, and Kiswahili.