Gesa Stedman encountered Jan Wagner in writing as a student before he was a prize-winning poet – not surprisingly, his academic writing skills amazed her. 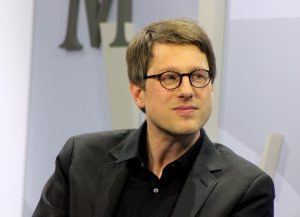 When I was a very young academic, I was asked to write a report on an MA thesis on contemporary Irish poetry and poets. I was only learning the ropes, so what I thought didn’t count one way or the other. I was overawed and amazed by what the student had written. The content was impressive, too, but I had seen others who could analyse literary texts equally well. What floored me completely was the skill of writing. The text flowed on the page and I was envious, struggling as I was with the writing of my doctoral thesis, and not finding writing in itself particularly easy. The text of my own work certainly didn’t flow like this student’s thesis. Not long afterwards, I realised who he was when he had published his first collection of poetry for a wider audience. Up till then, he was probably known to insiders but not to the general public. Ever since then, I have stopped comparing my own writing skills with those of real writers, let alone poets, and enjoyed watching what became of this EngLit student and how the interest in English, Irish, and American literature and poetry was transformed in Jan Wagner’s own poetic work. Winners of the Leipziger Buchmesse-Preis (2015) and the Georg Büchner Prize (2017) are indeed in another league!

More about the author can be found here: