Gesa Stedman explains one of the most recent attempts to diversify the literary field in the UK, the Jhalak Prize, which was awarded for the second time on 15 March 2018. 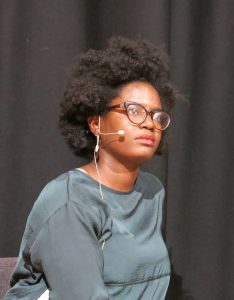 Reni Eddo-Loge’s manifesto/essay collection Why I  No Longer Talk to White People about Race was awarded with this year’s Jhalak Prize. A contributor to the best-selling, crowd-funded collection The Good Immigrant, edited by Nikesh Shukla, Eddo-Lodge’s non-fiction text is a timely intervention into a debate on racism in the UK. Originally a blog, started in 2014, Eddo-Lodge spent the next years turning her posts into a book, in an attempt to focus attention on racism in the UK, rather than on the more largely reported on situation in the US. She wants to highlight not only overt racism, but the “slippery side of racism – the bits that are hard to define, and the bits that make you doubt yourself”. (link to guardian article https://www.theguardian.com/books/2018/mar/15/reni-eddo-lodge-wins-jhalak-prize-why-im-no-longer-talking-to-white-people-about-race last accessed 18 March 2018)

As Sunny Singh, a member of the jury, states:

“It teases out the nuances of racism in its ever-shifting complexity, and yet does so in prose that is clear, precise and simple. It is a book that not only holds up a mirror to contemporary Britain but also serves as a warning, and most of all, a clarion call for action … We all need to read this book.”

“The journey towards understanding structural racism still requires people of colour to prioritise white feelings. Even if they can hear you, they’re not really listening. It’s like something happens to the words as they leave our mouths and reach their ears. The words hit a barrier of denial and they don’t get any further. That’s the emotional disconnect.”

The Jhalak Prize is awarded annually. It was started in 2016 by Sunny Singh and Nikesh Shukla, and is organised by Media Diversified. The prize money is relatively small – 1000 GBP – and it was donated by an anonymous benefactor, but that is not the point. The point is to highlight the fact that too few British writers of colour, i.e. of non-white heritage, find a publisher and an audience. Thus, the prize is awarded to any writer of colour in any genre, provided s/he lives in the UK. The jury consists of fellow writers. Like the originally entitled “Orange Prize for Women’s Fiction” (now the Women’s Prize for Fiction), the Jhalak prize has been criticised for its exclusive focus. But as long as a balance needs to be redressed, special prizes are needed, as the organisers rightly argue in their FAQ page on the prize:

“Is this prize racist? How would you feel about a prize for only white authors? No. Ultimately, we have chosen to put our time and money and resources into this prize, highlighting this inequality, redressing this particular imbalance, confronting this lack of representation. This prize is about celebrating marginalised writers, not excluding overrepresented ones. If you feel you want to put together a prize for only white writers, put your time money and resources into setting one up and we’ll let the chips fall where they may.”

An interview with the author published on youtube by the London-based bookshop Foyles can be found here: