This April, the London Book Fair (LBF) opened its doors for the second year in a row in Olympia-Kensington after experiments in the Docklands and other places in London. According to the fair’s website, the grounds saw 1,500 exhibitors and 25,000 fairgoers which made it quite an event to attend. LBF director Jacks Thomas thinks the LBF is on the rise again: “If you look at a three-year snapshot, 2013 and 2014 didn’t make for a very happy reading […] We are now going in the right direction.” (London Show Daily 13 April 2016)

But what makes the London Book Fair one of the most important book fairs internationally? 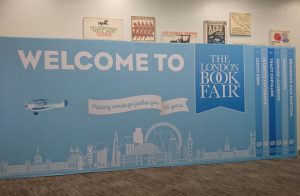 LBF is one of the most important hubs if you want to buy or sell rights – right after the Frankfurt Book Fair. So the LBF is targeted towards publishers and agents. In this respect, the target group clearly differs from the more reader-oriented Leipzig Book Fair, to name just one example.

Several countries organised collective stalls where they informed the visitors about their book markets – and sold the rights on offer. Many also published statistics about their national book markets – more on this soon @ the Literary Field Kaleidoscope – the staff at the stalls from Poland, Italy, and Scotland for example were very helpful and pleasant, other than the French I’m afraid to say. It was also really interesting to see what the German experts communicated to an international audience.

So although the target audience of the LBF did not necessarily include people like me, it nevertheless offered many exciting opportunities to discover news from the literary field even if you’re not selling or buying rights. For example, many readings and discussion panels on timely issues invited the audience to participate or just listen to new perspectives. I enjoyed the talks and meetings immensely. And the several “Authors of the Day”– Tracy Chevalier, Howard Jacobson, Jeanette Winterson, Nick Bostrom, Judith Kerr and Marian Keyes – added to the enjoyment and quality of the events.

Discoveries at the “Literary Translation Centre” 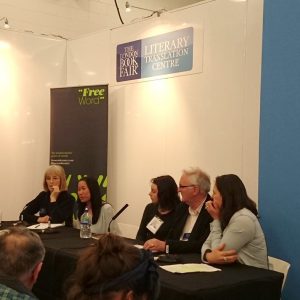 A site I particularly appreciated was the “Literary Translation Centre”. I attended the panel on the translation of what they called “underrepresented languages”. Chair Antonia Lloyd Jones (who translates from Polish) and Nicky Harman (Chinese), Mui Poopoksakul (Thai), Deborah Smith (Korean), and Peter Bush (Spanish and Catalan) held a very lively debate about the position of translations in the British literary field, the agents in this context, catches and chances. While they all seemed to feel that translators often act as “ambassadors” for small languages, Nicky Harman also emphasized that “you don’t want your author to be a curiosity”. With the Tilted Axis Press (link), translator Deborah Smith aims to translate more voices from so far underrepresented regions and cultures to offer a British audience more perspectives. At the same time, she makes a stand for her books to be seen as “art, not anthropology”. Her mission might receive even more attention now that her translation of Han Kang’s novel The Vegetarian just won the Man Booker International Prize.

The sponsor of this “Literary Translation Centre” area was amazon crossing, amazon’s translation spin-off. My first reaction was a pleased acknowledgement that the indie panels subverted the amazon business model: they were less commercial, more idealistic, reflected on their methods and actions and they put a lot of thought in their work. However, it is also true that amazon offers a platform for translations from ‘smaller’ languages and thus also smaller audiences. And it pays editors and authors much better than many traditional publishers. That this is merely a way to secure their market power might not seem as relevant to a struggling editor as it may to a literary field researcher… In any case, Deborah Smith shows through her Tilted Axis Press that alternatives are available, too! 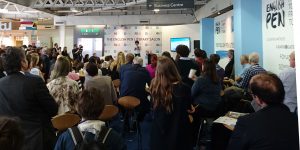 Jeanette Winterson drew a large crowd at the PEN stage

In addition to the “Literary Translation Centre”, the Shakespeare Stage, the PEN-sponsored area (featuring e.g. Jeannette Winterson and Judith Kerr) and the stage “The Faculty” hosted an impressive number of interesting events. The latter focused for example on academic approaches and perspectives, such as the future of academic publishing in times of ebooks and the Research Excellence Framework (REF), chaired by Prof. Samantha Rayner (UCL) with guests from Blackwell’s and Pan Macmillan. A panel discussion about libraries – “No to Library Closures: The Benefits of the Public Library in the UK and beyond; is the Library an Unaffordable Luxury in the Digital Age?” – revealed how passionate the debate is in the UK. Unfortunately, I could not spot any politicians on this panel. 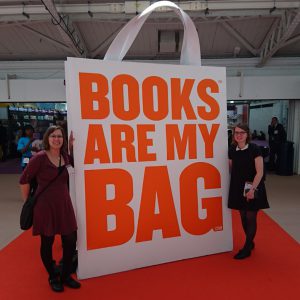 Books are our bag, indeed

“Books are My Bag”

Quite popular with visitors and other book people alike was the “Books are My Bag” campaign – and the huge book bag on the first floor one could take pictures with. The campaign is a collaborative effort by publishers, bookshops and authors to promote brick and mortar bookshops. It was launched in 2013. I talked to the people at the Booksellers Association who started the campaign and they were quiet pleased with the results.

Awards and the future of the literary field

Tuesday night was awards night! I have never seen such an efficient way to award such a large number of prizes – only the music was rather bad – it felt almost German… Prizes were awarded for 18 categories (you can find more information here: link to the LBF awards website), such as an award for “Lifetime Achievement” that went to Gail, Baroness Rebuck, DBE, Chair of Penguin Random House UK (more here: link to The Bookseller). The shortlisted people and organisations all sounded very interesting and are worth a closer look. What I particularly appreciated was the role that educational initiatives and junior agents in the field played that night. Several awards were established in this field and so the best Bachelor and Master theses in Publishing Studies were awarded, too, expressing the esteem of an established institution such as the London Book Fair for the newcomers. 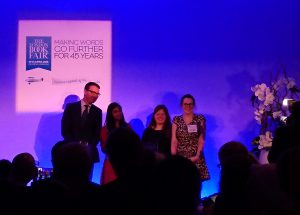 On Wednesday, I attended a Society of Young Publishers (SYP) and Women in Publishing meeting that brought together young people in publishing from Britain and Germany. I have to admit I was a little bit jealous of all the publishing degrees available in the UK and it was great talking to so many bright and inspired people about the present and future of our literary fields.

In 2016, two big shots were of course unavoidable: Shakespeare and Cervantes, both ‘celebrating’ the 400th anniversary of their death. At first I was a bit annoyed by all the buzz, but I was happy to find out that the LBF events around these two were rather low key and actually quite interesting. I stumbled over author Rhidian Brook, who contributed to the anthology “Lunatics, Lovers and Poets. Twelve Stories after Cervantes and Shakespeare” – including texts by other impressive authors such as Nell Leyshon and Kamila Shamsie. While I couldn’t relate to every single story (some allusions just escaped me because I don’t know all of Shakespeare and Cervantes works), I really appreciated the variety of approaches.

I missed parts of the last day at LBF, as I was heading to a conference in Cambridge about “Books in the Making“ at CRASSH, the Centre for Research in the Arts, Social Sciences and Humanities. The organisers brought together academics and practitioners in the field and thus provided a great combination of people, many with more than one hat. But that’s another story.

I left London inspired and full of new insights and ideas, so London Book Fair will definitely see me again.