Isabella Kremer and Taylor Hebert, two of Gesa Stedman’s students at the Centre for British Studies, Humboldt-Universität zu Berlin, spent their cultural immersion experience at Literature Wales. For Literary Field Kaleidoscope they talk about their experience.

Gesa Stedman: What were your respective tasks at Literature Wales? How did your work fit in with their overall aims? 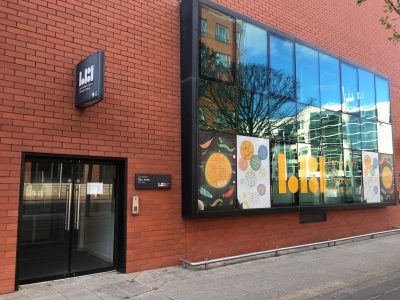 Isabella Kremer: Literature Wales has three main aims and activity areas: inspiring communities through participation in literature, supporting early career writers and celebrating Wales’ literary culture. Most of my work was related to Wales’ literary culture, but I also did some research for participation activities such as the Literature for Well-being scheme. My biggest task overall was managing the English-language submissions for the Wales Book of the Year Award 2020. Apart from that, I worked a bit for monitoring and evaluation and I compiled website content to promote literary events and to publish monthly opportunities for writers in Wales.

Taylor Hebert: Beyond my daily tasks, my presence at the organisation felt meaningful in and of itself – demonstrating the European outlook of a Welsh arts organisation that the HU partnership fosters. Literature Wales has focused on building these partnerships, specifically in Germany and Ireland, in the Brexit era.

Stedman: How did Welsh staff react to the fact that you are both not from the UK, and only speak a little Welsh?

Kremer: Paham ydych chi’n meddwl fy mod ddim ond medru siarad rhywfaint o Gymraeg? Other students from the GBZ had already done placements with Literature Wales, so having interns from outside the UK was nothing new for them. Literature Wales is a bilingual organisation, but nobody expected us to know Welsh. I picked up a few words and phrases, but generally I did all my work in English and if emails or website content were meant to be bilingual, another member of staff translated them into Welsh.

Hebert: Because Literature Wales are used to having international interns, my presence didn’t seem to elicit any particular response. Yet whenever I did use one of the perhaps five Welsh phrases I learned, I was met with praise and positive reinforcement! Additionally, when I disclosed that I had lived in Ireland, that my partner lived in Ireland and that I planned to return there to live, I was met with enthusiasm and questions about my experiences there personally and in the arts sector. There is a particular Celtic aspirational aspect of Ireland that many Welsh people identify with strongly.

Stedman: What do you think is more important to Literature Wales: promoting literature in Welsh in Wales, or ensuring literature from Wales – be it in English or in Welsh – is considered important beyond the borders of Wales itself, both in the UK and abroad?

Kremer: I think both are equally important. I would say Literature Wales promotes literature and writers from Wales – no matter whether they write in Welsh or in English. And I would add that this links up with their aim of inspiring and empowering individuals and communities through literature. Within Wales, they are engaged in big festivals such as the National Eisteddfod and Hay Festival, but they also promote Welsh literature internationally. The events at the GBZ, for example during the UNESCO Year of Indigenous Languages, are just one example of that.

Hebert: I’m sure that every non-anglophone country faces this question in promoting their literature. While I see the importance of both, I’d have to say the second. Yet this is my bias as a non-Welsh speaker, and a native English speaker from a vastly monolingual country. That being said, I think that general knowledge of the Welsh experience in the UK is very limited, let alone worldwide. For better or worse, the way that this experience can be best expressed to the UK and worldwide in the lingua franca.
On the other hand, a large part of this Welsh “experience” for some people is that English is their second language, and Welsh is their mother tongue. There is a seemingly irreconcilable gap there. But there is hope to bridge that gap when you read a book like Alys Conran’s Pigeon and her brilliant and seamless use of the Welsh and English languages by translanguaging.

Stedman: Did you have any direct contact with writers, and if so, how did that come about?

Kremer: By coincidence, I met Ifor ap Glyn, who is the National Poet of Wales, when I was visiting Tŷ Newydd, the National Writing Centre of Wales and Literature Wales’ second office in Gwynedd. I also met both Eloise Williams, who is the current Children’s Laureate Wales, and Gruffudd Owen, who is the Welsh counterpart, Bardd Plant Cymru. Eloise was doing a Q&A at a teachers’ reading group in Cardiff and I was able to take part in the meeting. Gruff was doing creative writing workshops in schools not too far from Cardiff and I joined him for the day to get an impression of the project. His workshops were in Welsh – so I got a few hours of fully immersive Welsh-medium education.

Hebert: I sat in on some meetings with writers present as an observer. Informally over coffee before a meeting, though, I learned that one of the bilingual writers, Clare Potter, had the same creative writing tutor/mentor (John Biguenet) as I when we had both lived and studied in New Orleans. John Biguenet is coincidentally also a literary translator of works from English to German. It is a small and interconnected world!

Stedman: Were you aware of how Corona has affected the Welsh literary field, or is it too early to say?

Kremer: My internship finished several weeks before the Corona lockdown began so that I didn’t notice anything while I was in Cardiff. What is very inspiring to see now is that there are many online activities connecting people through literature, such as online readings, Q&As with authors and creative writing challenges.

Hebert: Other than cancelling events such as the London Book Fair and having a different format for Wales Book of the Year, I’m not sure. It might be too early to say. I had to leave quite abruptly when the crisis hit.

Stedman: What was the most valuable part of your experience as interns?

Kremer: As an intern, the most valuable experience was meeting new people and seeing how projects were put into practice, for example in schools, in community workshops or at Tŷ Newydd.
And I would say my time in Cardiff was a very rewarding experience overall because I learned a lot about Wales and to some extent I also got a new perspective on the UK as a whole.

Hebert: I hesitate to say the neoliberal millennial cliché of “the network,” but I did gain a robust Welsh network because of this internship, in both career and friendship. Literature Wales is staffed with wonderful, interesting, and talented people. Getting to work beside them in Cardiff and briefly in North Wales was an absolute pleasure! Wales is such an inspiring place, and I would love to return one day since my stay was cut short due to the coronavirus crisis.

Literature Wales is the national company for the development of literature.
“Our vision is a Wales where literature empowers, improves and brightens lives.”
www.literaturewales.org

Taylor Hebert is an aspiring writer, welsh-cake enthusiast, and current student in the MA British Studies programme at Humboldt University. She is currently working on a thesis reconsidering violence in British drama from her hometown of Seattle.

Isabella Kremer studied English and Philosophy before starting her MA at the Centre for British Studies. She likes to believe her parents’ claims that she learned to walk on the beach of Caswell Bay on the Gower Peninsula and she is currently working on a thesis about language policy in Wales.