Gesa Stedman comments on the surprising Nobel Prize in Literature winner Kazuo Ishiguro and her personal favourite, the early novel An Artist of the Floating World. 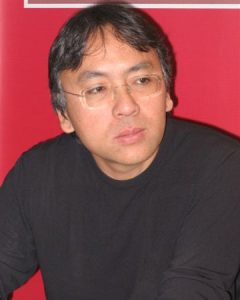 With market-driven decision making in publishing, and many predictable moves – the next Girl on the Train, the next middlebrow multicultural feel-good story , the next middle-class navel gazing novel – it is nice that some announcements are indeed surprising. The Nobel Prize Committee awarded the literary prize to Japanese-born writer Kazuo Ishiguro, who lives and works in England. While the British count him as one of their own, his literary and thematic reach goes beyond England. A writer who reinvents himself with almost every novel and whose subject matter has an appeal beyond Little England, he is perhaps best known for his unreliable narrators as well as for the novel and subsequent film adaptation, The Remains of the Day. Ishiguro is adept at developing narratives that don’t shy away from difficult topics, be it sympathy for the Nazis in aristocratic circles in inter-war England, genetic engineering, or the responsibility of the artist in difficult political circumstances.

The latter is the main focus of my favourite Ishiguro novel, The Artist of the Floating World.  A short text, precise writing, sensory experience, an unreliable narrator of course, and a serious topic: how to be an artist under a fascist government or during a dictatorship, and how to deal with one’s own political and artistic past. While the novel is one of the most ‘Japanese’ of all Ishiguro’s novels to date, and while it allows the reader fascinating insights into Japanese art, society, and history, it deals with a problem which transcends national boundaries. How to live the life of an artist under a dictatorship, how to deal with censorship, and how art and politics are linked are questions which resonate as much today as they did when the novel was first published in 1986. Booker Prize winner and one of the then “Granta Best Young British Writers” alongside Martin Amis, Julian Barnes and the like, Ishiguro now joins Samuel Beckett, Doris Lessing, Seamus Heaney and other writers working in English and attached somehow to the UK who have received one, if not the, highest accolade in the literary field.