The Literary Field Kaleidoscope and the Centre for British Studies invite you to a public reading with author and activist Nikesh Shukla, chaired by Musa Okwonga. The reading and discussion will take place on 14 November, 5pm, at the Centre for British Studies in Berlin (Mohrenstr. 60, U-Bahn Stadtmitte or Mohrenstraße). Find out more about our two exceptional guests in the post below. 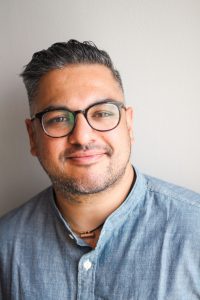 Nikesh Shukla is an exceptional author and editor and activist and many more things at once. I first met him at the British Council Literature Seminar (link to the #BritLitBerlin website) in January 2017 and was amazed at the combination of energy, talent, friendliness and down-to-earthness.

Shaking up the Literary Field

Nikesh Shukla has a reputation for finding ways to shake up traditional publishing and discover alternative ways to get the word and works out. Among many other things, he edited the collection The Good Immigrant – including contributions by Nikesh himself and Musa Okwonga – and, together with the author Sunny Singh and Media Diversified, he started the Jhalak Prize, a prize for the best book written by a writer of colour in the UK. The prize is open to fiction, non-fiction, short story, graphic novel, poetry, children’s books, YA, teen and all genres, as well as self-published writers. It was awarded in 2016 for the first time and went to Jacob Ross for his novel The Bone Readers published by the indie publisher Peepal Tree (link to the publisher’s website, link to a review by Bernardine Evaristo).

Sadly enough, although maybe unfortunately not surprising in our times, the prize was accused of discrimination. The organisers actually received a letter by the Equalities and Human Rights Commission (EHRC) – I’m not kidding – and I’m going to quote from Sunny Singh’s Media Diversified article here, because it’s quite extraordinary:

I really recommend reading Sunny Singh’s article to get a fuller picture (I didn’t even mention the MP who got involved) (link to the article). The EHRC decided in the end that the prize “constitutes lawful positive action“, but this example just illustrates once more how strenuous and nerve wrecking it is to initiate change in the literary field – and society – in particular if you’re not part of the white establishment. 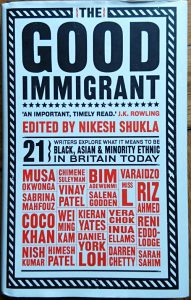 However, the good news is that it’s not impossible. The collection The Good Immigrant was a huge success – and may have brought some changes to the literary landscape. Not only has it created a space for writers of colour “to tell their own stories in their own voices” (Nikesh Shukla in an interview with Gina Chahal for culturetrip in 2016, link to the interview) , but it also received a lot of attention across the board and thus broadened a lot of horizons and might have encouraged others to follow the example. In the abovementioned interview, Nikesh spoke about the opportunity The Good Immigrant provided for authors – and their characters – to be “anything other than stereotypes and romanticised tropes”; to be “real and textured and nuanced and honest and sad and funny and heartbreaking and angry and knowledgeable.” Unfortunately, in today’s literary field (not just in the UK), writers of colour do not often have this opportunity.

The success of The Good Immigrant also brought a lot of attention to the indie publisher Unbound – a platform with experienced editors, marketing people etc. who start their work after a project has successfully been crowdfunded. Thus, they can publish projects that might have ended in a more ‘traditional’ publisher’s slushpile – and they already have an audience once the book gets out. In the case of The Good Immigrant this has worked particularly well. It has sold over 50,000 copies and won the “Books are My Bag Readers Choice Award”.

The collection of 21 stories “paint[s] a picture of what it means to be ‘other’ in a country that wants you, doesn’t want you, doesn’t accept you, needs you for its equality monitoring forms and would prefer you if you won a major reality show competition.” (from the Unbound pledge). It would be very hard to sum up the stories as every one of them is thoroughly individual – in their focus, style, atmosphere and outlook. I remember I had to take breaks while reading the book – to let the stories sink in, but also to recover at times. Darren Chetty’s “You Can’t Say That! Stories Have to be about White People” had me reduced to tears as he writes that children of colour in his creative writing classes mostly created white characters because they thought it was not ok to write about black characters. But then again he also explains how he reacted and how the children’s stories changed and that left me with a more optimistic feeling. Chimene Suleyman’s powerful story “My Name is My Name” struck a chord with me and reminded me of the language and name politics of my own Franco-Algerian family. And made me rethink some of the consequences of my parents’ and grandparents’ choices. Musa Okwonga’s story “The Ungrateful Country” spanning the time of his parents’ escape from Idi Amin to today hurt so much – and I sincerely hope that Berlin will not be the next disappointment.

I remember the contributions as deeply personal, touching, and sometimes hard and uncomfortable to read. I couldn’t even relate to every story at once or understand everything the first time I read some of the contributions, but then I believe that’s one of the strong points of the collection. It definitely broadened my horizon and also made me be more aware of mechanisms of privilege and discrimination in their more subtle forms. I can only recommend to read the book – and attend our reading and discussion session on 14 November in Berlin, where Nikesh Shukla will also read from his story in the book.

Nikesh’s other works include the novels Coconut Unlimited (Quartet Books, 2010) and Meatspace, (The Friday Project, 2014), the  novella The Time Machine (Galley Beggar Singles, 2013) and a number of short stories and articles that were published widely. He wrote the Channel 4 Comedy Lab Kabadasses (2011) and co-authored the award-winning short film Two Dosas (2014). You can find out more about his works on his website (link to Nikesh Shukla’s website). And I learned about two more projects in his pipeline: The Good Journal and Rife: Twenty Stories from Britain’s Youth.

Nikesh Shukla has been working with young people for some time and is also the editor of Rife Magazine, a Bristol-based online magazine for young people. Together with journalist Sammy Jones, Nikesh will soon publish Rife: Twenty Stories from Britain’s Youth (published by Unbound) written by writers under 24. Here’s a short summary from the pledge:

“The country is messed up and our future is looking gloomy. We, Britain’s young people, have to live with the repercussions of what the oldies have done – we didn’t vote for Brexit, we didn’t vote in Theresa May, and you know what? We’re sick of being talked about instead of talked to. So here’s our book. Written for you by us. You’re welcome.” 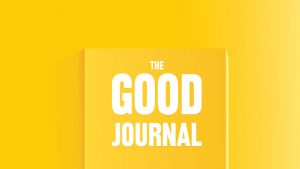 And – drumroll – a couple of days ago, the next project was successfully funded, this time via kickstarter and with 1,058 backers who raised more than the needed 40,000 GBP. The new project is called The Good Journal and will be published by Julia Kingsford and Nikesh Shukla (link to the project on kickstarter). It’s a quarterly literary journal that showcases “established writers, up-and-coming writers and […] undiscovered talent“, in short: “the very best work by writers and illustrators of colour”. The Good Journal” will contain texts and illustrations as well as graphic stories, comics and photo series. The first edition is planned for April 2018 – and a number of great authors have already signalled their interest in contributing. Keep an eye out for this new journal!

Last, but not least, I would like to introduce our chair for the public reading on November 14: Musa Okwonga. The list of his talents is very long. According to his website, he is a poet, author, sportswriter, broadcaster, musician, public relations consultant and commentator on current affairs, including culture, politics, sport, race, gender and sexuality. I’ve been following him on Twitter for some time now and can also confirm he’s very passionate about football (it won’t take you long to guess which club he’s supporting) – not least in his poetry and other writing.

But even more interesting were his recent posts and blog entries about the sexual harassment of women. He wrote a very interesting piece on men and the #metoo hashtag, i.e. his realisation that the sheer number of harassment cases must mean that it’s very likely that all men know someone who has sexually harassed or abused women. And he reflects on how men can contribute to either the solution or the problem (link to the blog post). Noteworthy was also a reader’s letter that criticised how more attention was given to the men who spoke up rather than the women and Musa’s reaction to it (link to the critique and reaction): he opened his blog to women who wanted to share their story and you can read them here: www.okwonga.com

Both our guests are really exceptional people, so don’t miss your chance to meet these two multitalented authors and participate in a lively discussion. You will have the opportunity to buy Nikesh’s and Musa’s books from the book table kindly organised by Marga Schoeller Bücherstube (link to the bookshop).