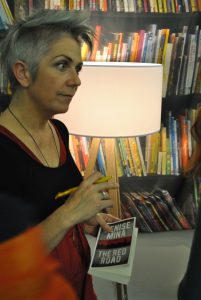 Yesterday evening, we had the great pleasure to welcome the brilliant Scottish writer Dame Denise Mina for a public reading in Berlin.

Denise Mina is probably best known for her crime novels – so far, she has published twelve of them – but she also writes short stories, plays and graphic novels. She won several awards including the Theakstons Old Peculier Crime Novel of the Year Award in 2012 and 2013. In 2014, she was included in the Crime Writer’s Association Hall of Fame. The event on Monday was jointly organised by the Centre for British Studies at Humboldt University in Berlin and the Literary Field Kaleidoscope. This is my personal and very subjective report about the event.

The evening started with Denise Mina reading from her new novel “The Long Drop” (out in March 2017). It is based on a true story and a serial killer who murdered several people in Scotland in the late 1950s. While the ‘bad guys’ or girls in Denise Mina’s novels are usually not entirely rotten and I, as a reader, often feel compassion for them and anger at the system that creates the offenders, Denise admitted that for her latest novel, the character of the murderer was hard to write. She found it difficult to empathize with this specific serial killer, not least because of his statements and rants that showed his disrespect towards all living beings.

However, it’s important to her to try and understand the motives and histories of the offenders in her novels – she isn’t interested in clichés and one-dimensional types. The same holds true for her female protagonists, e.g. DI Alex Morrow. She is a successful police inspector but not just a female version of the broken alcoholics or other stereotypical male inspectors that we know from many other crime novels. Alex has her flaws and her conflicts, but at the same time a working love relationship and two kids. Denise Mina told us that she deliberately wanted to create a character that differed from the mainstream representations – and while her ways to characterise police and offenders was hailed as refreshing at home, she said that it was also well received in Scandinavia but not as something extraordinary. I think we could do with characters like journalist Paddy Meehan and DI Alex Morrow in Germany, too, so I’m pleased to report that the ariadne (imprint of Argument Verlag) will translate and publish the Alex Morrow novels “Blood Salt Water” and “Gods and Beasts” next year! 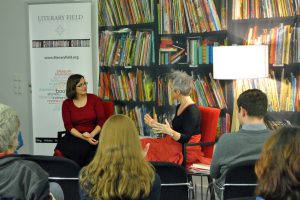 The setting of Denise Mina’s novels plays an important role in her crime fiction, so we talked quite a bit about them. “Blood Salt Water”, for example, could not really be set anywhere else – the coexistence of at least two parallel worlds in what she called “the Hamptons of Scotland” is necessary for the mob to flourish and institutions to turn a blind eye. And key scenes in “The Red Road” are set in Glasgow’s Red Road area (for those who are not familiar with the area, Gerry Mooney’s article about the demolition of the social housing might be interesting: link) – I’d even go as far as to say that the history of the district and the crumbling of hope and aspiration is mirrored in some of the protagonists.

It hard to sum up all of our conversations, so I’ll just add one more point our guest made. When I asked her how she approached new projects, Denise said that she always has a political agenda right from the start. One of her aims is to explore and try to understand those who commit the crimes in her novels, how the various systems we and they are moving in work and how they impact on individuals. Denise said that she likes to use crime novels for such attempts because it is a genre with low “entrance barriers” – and she told us she likes how this genre transports a promise for the readers to be entertained, something she hailed as a value of literature, not a flaw.

The room was packed with a keen and talkative audience and the talks went on after the reading was over. Denise Mina took time to talk to the GBZ’s students and other guests and kindly agreed to sign books that could be bought at the book table provided by the independent bookshop Palma Kunkel (Greifswalder Straße, Berlin).

It was a wonderful evening in cold December.

Our next public reading will probably take place in spring 2017 – stay tuned! You can even subscribe to our blog entries and news by signing up with your email address (upper right hand corner of this website).