Today, I have the great honour to join the blog tour for Neil Bartlett’s Address Book, published on 4 November by the fabulous indie publisher Inkandescent, with this review. 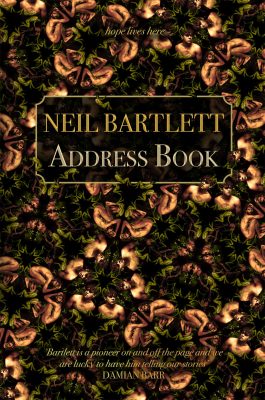 In Address Book, we experience seven different stories set in different times and places, including a flat in Clerkenwell in 1891 and 1987, a tower block in Hackney Downs, ‘the dodgy end’ (and time) of Camden as well as an unnamed seaside town in what felt like the present.  Every character and time has a distinctive voice and I thoroughly enjoyed listening to them. And while they all grapple with the conventions and expectations of their times, in particular with regards to masculinity and homosexuality, they all find their way to hope and happiness.

“In Address Book, every front door hides a different narrative; everybody sings to a different tune—but I really believe that our experiences of love and loss and struggle can bring us together.” (Neil Bartlett)

I already loved the short story “Twickenham” in Mainstream and was happy to find out that it also starts off Address Book, albeit with some more details that link the story to others in the book (kudos to the author and the editors for making it work so well as a short story on its own in the Mainstream anthology; you can read a review about Mainstream on our blog via this link). In “Twickenham”, a teenage boy experiences his sexual awakening with a man twice his age. Their first encounter happens in the lavatories of Waterloo Station and the young Andrew follows John’s invitation to Twickenham (in John’s car, the nightmare of any parent of teenagers, but from what I read also something Bartlett was warned about when he was young). But it’s not a quickie-in-the-loo or abuse story, on the contrary. Through Andrew’s perspective, we get to witness his thoughts and inner conflicts, his nervousness and the immense joy he experiences for the first time while having sex with the more experienced and attentive John. Their encounter, their life-long friendship and occasional love relationship had a lasting effect on Andrew and in Address Book, he reflects on it before his life is taking another turn.

I must admit that I haven’t read lots of books lately that wrote about sex – and I wasn’t really touched by the ones I remember. But to me, Bartlett’s first and last stories were very moving in their sensitiveness and the connection between the characters’ bodies and souls. Not sure if I can convey what I mean, but I found an article by the author himself about the representation of gay sex and the link between the first and last story, so maybe you’ll enjoy reading this beautiful piece by Neil Bartlett on the “Means Happy” blog (external link).

But the story set in Twickenham is just the first of seven brilliant stories in Address Book. The following one revolves around a queer “dancing-queen” in 1987 who gets out of unstable living conditions and finally arrives in “a room of one’s fucking own”, manages to create a sense of hope and vision of a future, but still must cope with stigma and discrimination. This story is followed by one focusing on a gay teacher who lived at the very same London address in the 1890s and who struggled with his sexual desires and the Catholic Church. I guess it would have been very easy to just demonise church and religion, but Bartlett admirably presents a whole spectrum of feelings you can have towards religion and its institutions, including finding some kind of solace and condemning the physical and moral abuse as well as the hypocrisy of the institution.

Story number four takes us to Hackney Downs and a civil partnership between two women, narrated by their gay friend who reflects about ‘how far we have come’ without forgetting that there is still some way to go. Conflicts within families across generations are also part of this story as well as the burden that many feel who do not fit in the ‘boxes’ of their times. “I suppose none of us ever realises how much weight we’ve been carrying until it’s lifted,” contemplates the narrator. After all, the story ends on an optimistic note that happiness and new families can be found – something this story has in common with most of the others.

We then move to the perspective of a pregnant woman in the mid-1960s who struggles with the expectations she feels she has to fulfil and who connects with her gay neighbour. This story is followed by a shorter one about a very empathic gay priest who needs to be saved by his partner from breaking into pieces – not least because of his work in a detention centre and the hostile environment policy of the Home Secretary in charge, Theresa May. And finally, we get to Roger, a man in his 60s, who loses his life-long partner to cancer and drowns in grief. Following Roger through this time of struggle with the new silence in his life is heart-wrenching, so it was a great relief to see that he finds a way to cope and allow someone new into his life.

I enjoyed how the stories give us so much more than the dominant stories about queer lives, love and sex. When I grew up, queer representation in literature mostly covered gay men, relationships were short, and stories revolved around the characters’ coming out or them dying of AIDS. (Of course, this might also be due to the books I had access to and I’m not saying that other, more nuanced representations didn’t exist; but the single story tales were the one I encountered until “My so-called Life” on TV and “RENT” on stage…). So it made me very happy to read Bartlett’s nuanced, well-crafted stories.

There were some recurring themes throughout the book: the struggles with conventions and expectations that I mentioned, but also e.g. the negative representation of queer people in the media of the respective times, like in the stories set in 1891, the 1960s and 1987, and the effect this had on how queer people were perceived. On the other hand, music, literature and art bring many of the characters solace in the various chapters. I also loved the little elements that connected the stories: the addresses, for example, but also family stories and people who featured in more than one tale, family secrets as well as musings about mattresses and doors.

Doors and Addresses and Queer Stories 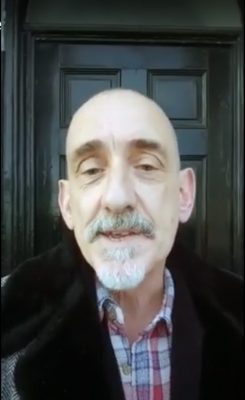 Neil Bartlett in front of the door leading to the last story in Address Book (video still, youtube)

Doors have a variety of meanings or functions in Bartlett’s stories, but first and foremost I read them as a means of protection: physical protection from the world outside that create a safe space for our marginalised characters where you can let down your guard and cry and also a protection for the “dreams you only allow yourself to dream if the door is closed” (Neil Bartlett). In one story, set about 2010-2016, a positive connotation of a doorway without a door is added – maybe not surprisingly uttered by the priest who works at a detention centre and a chapel at Heathrow Airport and who had to deal with the UK government closing doors on immigrants – triggered by an postcard with the Caravaggio’s “Madonna of Lareto”: “there is nothing to keep you out. […] nothing that could be used to exclude, or deny, or humiliate” and it gives him a sense of “safety, and of refuge”.

The doors and their flats in the book were actually also how Address Book started. Bartlett talks about it on a series of short videos that you can watch on youtube or Instagram (links below) and he wrote:

“Behind every front door, there is an untold story. They are the lost and hidden and disbelieved and overlooked ones. In other words, they are the queer ones.” (link to source, Foyles blog)

So Bartlett set out to write those queer stories. In one of the aforementioned clips, he is standing in front of a building in Camden where he lived in 1983 when it was not quite the ‘place to be’. “I was a different person and the world was a different place.” When he came back in 2019, he mused: “No one could ever possibly now imagine what my life was like as a young queer man in London in the early 80s. That made me think. What are the stories in that room that I can’t imagine?

So I let my imagination start to wander”.

So, I thoroughly enjoyed the book that came out of this wandering imagination! Can I please also give a shout out to Justin David for the stunning cover?! It already looks great from afar, but the closer you get, the more you can see. A kaleidoscope of images and perspectives. Very fitting, I think.

Neil Bartlett’s list of achievements is long! He has written in many genres and has “a whole shelf of novels, plays, adaptations and translations to his name.” () He has published with a list of exceptional indie publishers like Verso, Oberon Books, Serpent’s Tail, Bloomsbury, Faber and Faber – and now Inkandescent!

What is amazing to see is his continuous commitment and activism for the gay community – and I’ll be quoting a couple of things about him from his website: “Neil Bartlett has been making rule-breaking theatre and performance since 1983. […] In 1983, Bartlett worked as an administrator for gay community theatre company Consenting Adults in Public, helping to stage and tour Louise Parker Kelley’s Anti Body, the first play produced in Britain to address the AIDS crisis.” And this was just one of the first, but no means last of his contributions. It’s a relief to see that his work is acknowledged within the gay community and beyond: “In 2008 he was awarded an honorary doctorate by Brookes University Oxford in recognition of his body of work and of his pioneering and continuing commitment to gay culture and civil rights, and in 2012 he was awarded a second honorary doctorate by the University of Brighton.”

Neil Bartlett wrote for the Foyles’ blog about the “Lives and locations – the inspirations behind Address Book by Neil Bartlett”: external link

And another fun one to close with: Neil Bartlett talks us through a playlist to accompany his new mosaic novel on https://www.inkandescent.co.uk/post/address-you-up-in-my-love