Today, Katarina Živković, one of our students at the Centre for British Studies in Berlin, reviews Maurizio Ascari’s A Counter-History of Crime Fiction and tells us why it captured her.

While doing research for a university paper, I happened to stumble upon a slender little volume that claimed to provide a history of crime fiction which diverges from the classic narrative. In the opening pages the author explains that, traditionally, philosophers were determined to firmly distinguish science – with its rational, empirical approach to the search for knowledge – from all other intellectual pursuits. Conversely, Ascari uses non-canonical sources to provide a fuller picture of how the aesthetic and ideological make-up of our world was formed. I soon realized that the book was not needed for my paper, but the author’s ambitious aims, as well as his clear and captivating prose, compelled me to read on. 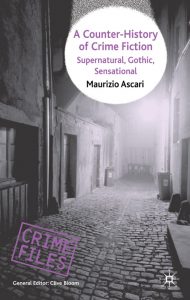 As many 20th century anthologies show, critics of early modernist detective fiction followed a very similar path as the philosophers. They created, and strenuously defended, a strictly demarcated genre. It was the literature of the riddle, a clear, logical puzzle based on the principle of fair play. The reader is given clues throughout the novel and attempts to solve the mystery before the meticulous, gentlemanly detective. In his Counter-History, Ascari aims to focus on the origins of crime fiction which appeared long before the likes of Auguste Dupin and Sherlock Holmes. He achieves this by following the formation of detective fiction back to a time before the concept of it even existed.

Ascari guides us to look back on medieval drama, where criminals were “detected” through “divine omniscience”, with God pointing out the culprits through various assortments of miracles and punishments. He reminds us of the importance of dreams and supernatural visions in the discovery of criminals in Renaissance tragedies such as Hamlet, as well as the “noble” ideal of revenge as a way “to ensure that justice is carried out”. As we move towards the “professional detective case” and the Enlightenment, the ideal of “divine omniscience” gets replaced by its secular variety. We now have the all-seeing eye of the state as a powerful machine of surveillance, represented by its police officers and public authorities. As Victorian scholars become increasingly optimistic about the progress and inherent perfectibility of humans, some members of the society turn back to ghosts and prophetic dreams in a Gothic fiction popularity boom. Ascari shows how the scientific inventions and technological advancements of the 19th century cause pseudo-scientific societies to mushroom throughout the UK, inspiring stories of murderers with supernatural abilities such as the power of mesmerism.

In the second part of the book, Ascari points out transnational influences which partly inspired British crime stories. In particular, the newly-emerging craft of translation helped to share narrative techniques, although sometimes this happened in the form of plagiarism. We further learn how the advent of journalism and the need for fast, compelling stories brought sensationalism to the foreground of popular literature. The author then paints a picture of 19th century London as the global center of progress and, paradoxically, a “Heart of Darkness”, with Ascari describing its East End as the home to some of the most deprived people in the British Empire. This image of the city is particularly evocative, especially when coupled with Ascari’s descriptions of how the poverty of these people was used for political and ideological purposes, as a way of dealing with the “exotic” and “savage” elements that were coming from the distant colonies, threatening the civilized progress of the great capital.

Ascari’s book is a critical study encompassing many different genres, aesthetic and ideological concepts. Nevertheless, it never feels dry. The writing is fluid, guiding the reader from Shakespearean drama to the modern detective novel without ever drifting away from the main theme. The language is impressively straightforward, and Ascari manages to discover interesting details even among the most obscure commercial writers of the 18th and 19th centuries. If some areas might be slightly too packed with summaries of unknown Gothic novels, this is almost always helped by a dynamic or thoughtful quote that provides a refreshing break from all the paraphrasing. As we read accounts of the dark recesses of London, we always remain sufficiently anchored to the present to note how these stories are never divorced from the prevalent ideologies and prejudices of their contemporaries. This book is by no means meant for crime fiction readers only – it is an excellent read for anyone who is interested in balances of power, the complexities of colonialist societies and that uncomfortable “heart of darkness” which lives in all of us.

Maurizio Ascari teaches English Literature at the University of Bologna in Italy. His publications include books and essays on crime fiction (A Counter-History of Crime Fiction, 2007, which obtained a nomination for the Edgar Awards), transcultural literature (Literature of the Global Age, 2011) and inter-art exchanges (Cinema and the Imagination in Katherine Mansfield’s Writing, 2014). He has also edited and translated works by Henry James, Katherine Mansfield, William Faulkner and Jack London. His debut novel Faded Letters, tackling the subject of forced labor under the Nazi regime, appeared in the UK in 2013.

Katarina Živković is a student at the M.A. for British Studies of 2016-2018. She is from Belgrade (Serbia) and specializes in Culture and Literature, Economics and Management and Disability Studies.

Reproduction of the cover with Palgrave’s kind permission (link to the book’s product page).