Isabella Kremer reviews Gail Honeyman’s debut novel Eleanor Oliphant is Completely Fine (HarperCollins, 2017) for Literary Field Kaleidoscope. The novel won the Costa Debut Novel Award and three accolades at the British Book Awards (2018): Debut of the Year, Overall Winner and Marketing Campaign of the Year (it was indeed all over the media and kept popping up, not only but also in the Christmas buying recommendations). Interesting comment by the Nibbies judges: “The fantastically strong trade marketing showed the intent to make it a bestseller, and the well-focused consumer campaign drove it through. It had a big budget, but the results were even bigger – it reached every part of the market” (source: www.thebookseller.com/british-book-awards/winners/2018#) – with 2 million copies sold, according to its cover. So what was it all about? 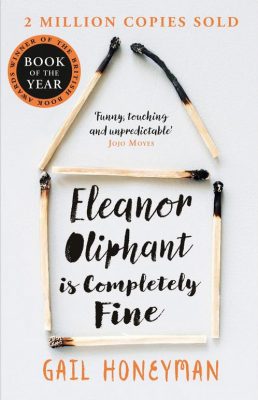 Eleanor Oliphant leads a perfectly structured life: she has had the same office job for nine years, every lunchbreak she solves crosswords, every Wednesday she has a phone call with her mother, and every weekend she spends alone in her flat, half-drunk on two bottles of vodka. Eleanor tells us that this life is perfectly fine, but we do not have to look very far beyond the title of the novel to know that it is not.

Eleanor is not only deeply lonely, but with all her compulsive routines, she also tries to bury a terrible childhood trauma that is keeping her trapped in a cycle of fear and self-reprimand. The novel shows how Eleanor slowly manages to break free from this cycle – with the help of new, unexpected acquaintances and the small acts of kindness that show her that she is much more lovable than she first believes. As a narrator, Eleanor depicts her emotions in a very rationalising way, especially in the first half of the novel. This creates an effective contrast to those moments when her controlled surface cracks and we see a glimpse of her true suffering. Eleanor’s distorted view of herself and her feelings contrasts with her clear-sighted observations of other people and social situations. She has little interest in small talk and its superficial hypocrisy and is not well versed in the social codes governing birthday parties or visits to beauty salons. From the perspective of the odd one out, her uncompromising honesty unmasks the oddities of our social conventions. At times, Eleanor’s judgements may seem rather haughty, but she never loses our sympathy as her comments are both insightful and – thanks to her extensive vocabulary – often extremely funny.

If you are looking for a book about loneliness, you will find it here, but be aware that the circumstances that have caused Eleanor’s isolation are about as far out of the ordinary as you can imagine. Perhaps the number and the scale of the horrors that Eleanor had to bear are somewhat out of proportion, but their emotional effect and their slow revelation are well depicted. With great skill, Honeyman gradually allows us to surmise and then to know what has happened to Eleanor, and when Eleanor is finally able to admit to the truth of the events, we have accompanied her on a journey to recovery that is both gut-wrenching and heart-warming.

There is much darkness in Eleanor’s life, but the novel carries a hopeful message that will resonate with many readers. It encourages us all to be kind and not to judge too harshly, both on others and on ourselves. It suggests that you can always change your life, even if you may start by walking in the wrong direction. And it shows that this change is not about trying to adapt to what society deems acceptable, but about first accepting yourself and then slowly, gently growing into the person you want to be and not into the person anyone or anything says you should be.

Isabella Kremer is a student at the Centre for British Studies, Humboldt-Universität zu Berlin.