Today, Chiara Harrison Lambe, a student at the Centre for British Studies in Berlin, shares her review of Kazuo Ishiguro’s novel Never Let Me Go (Faber, 2005) and claims that it hasn’t lost any of its emotional force over the years. 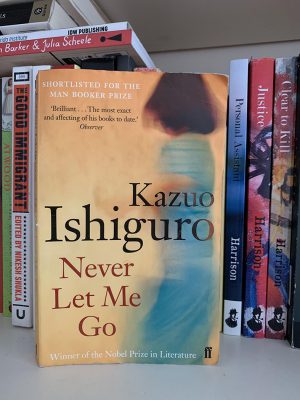 Never Let Me Go opens with its narrator, Kathy H., describing for the reader her age and occupation: thirty-one years old and a ‘carer’, respectively. She makes it clear that she is good at her job: “My donors have always tended to do much better than expected,” she boasts in the opening paragraph. “Their recovery times have been impressive, and hardly any of them have been classified as ‘agitated’, even before the fourth donation.” From these very first sentences, something sinister lurks beneath the surface of Kazuo Ishiguro’s sixth novel. Kathy refers vaguely to ‘carers’ and ‘donors’, but declines to clarify what cause a donor would have to become agitated.

With its deceptively simple narrative style, Never Let Me Go’s story of an alternate 1990s-era England unfolds slowly and, at times, in nonlinear fashion. Kathy’s first-person narration aches to give you a well-rounded and unbiased image of her childhood and adolescence. Often doubling back across time to give the full picture, Kathy strains for objectivity, particularly when it comes to depicting fairly her often-tumultuous relationships with her closest friends Tommy and Ruth. For the first third of the book, Kathy recounts her years at Hailsham, a boarding school seemingly in possession of all the requirements for a fulfilling upbringing: a community of students growing up together through all the necessary aches and pains of puberty, a wood looming on the edge of the grounds from which students are warned to stay away, alternately compassionate or strict teachers referred to as ‘guardians’, and an intense focus on the arts. Although Hailsham seems idyllic, small details reveal it to be an oddly patchwork institution.

For fun, the students trade old cassette tapes – one, Kathy’s prized possession, gives the book its name – and original artwork. The obsession with the arts and the importance of creativity brings a woman referred to only as ‘Madame’ into their midst. There to select the most talented of the students’ artistic offerings, Madame shies away from their touch as though frightened or repulsed. Even the teaching materials seem oddly second-hand for an institution that presents itself the way that Hailsham does. In one charming yet tragic thread that follows the novel to its end, the geography lessons at Hailsham are missing one essential component: in lessons on the regions of England, no images of Norfolk can be found. The students then decide for themselves that “Norfolk was England’s ‘lost corner’, where all the lost property found in the country ended up.”

The themes of loss and rediscovery (and loss, again) recur in a myriad of ways throughout the text. In the sections at Hailsham, Kathy describes a place saturated with unspoken fears about the future – fears that seem to haunt the students and guardians alike but which no one wants to put into words. The awful truth of what lies ahead for Kathy and her schoolmates reveals itself inch by inch, until one guardian disobeys her superiors and draws back the curtain herself. “Your lives are set out for you,” she says, with surprising frankness. Then the revelation comes: the students are clones created for organ donation, whose predetermined fate is to first care for clone ‘donors’ undergoing operations (of which few make it past three, and none past four) and then become a donor themselves. The world of Never Let Me Go is one where most diseases are curable – cancer included – but at great moral cost. In declining to go into detail about clone development, the surgeries, or the human society happily sentencing clones to an early death, Ishiguro sets his novel in a vacuum, elevating it above its ‘science fiction’ label. The lack of specificity humanises Kathy H. and her friends on their inorexable walk towards ‘completion’, the darkly coded word for a clone’s final donation.

Kazuo Ishiguro won the Nobel Prize in Literature in 2017 for, “novels of great emotional force, [uncovering] the abyss beneath our illusory sense of connection with the world” (link to BBC article). This abyss is ever-present in Never Let Me Go, a novel whose emotional force remains as potent today as at the time of its release thirteen years ago.

Chiara Harrison Lambe was born in Dublin and raised in Brooklyn, New York. She is a student at the Centre for British Studies and an aspiring art historian (and/or speculative novelist). You can read more of her work at rollmagazine.com and killscreen.com.