One of the best-selling and critically-acclaimed novels of 2019 has just been adapted for television by the BBC: Sally Rooney’s second novel Normal People, a run-away success from Ireland to which readers all over the Anglophone world seem to relate. It was also Waterstone’s controversial choice of book of the year in 2018 – controversial as it was a best-selling novel already before this choice, and the slot could have been used to promote a less well-known author, and perhaps for a change, not another white author. Shortly after the upheaval, this important marketing-tool which pushes sales enormously was indeed used for two writers of colour. Normal People was published to positive reviews, and the TV adaptation seems to please viewers as much as the novel’s many readers (or buyers) who have just shot the novel back to the top of the NielsenBookScan bestseller list. This is what our guest author Aleena Farooq made of it. 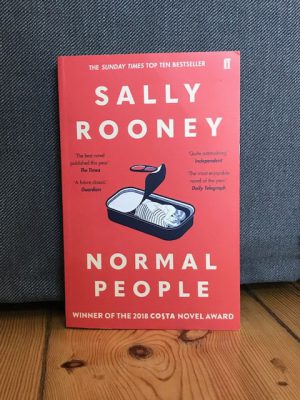 Normal People, Sally Rooney’s second novel, longlisted for The Booker Prize, revolves around Marianne and Connell, who become passionately attached and unpredictably detached from time to time. The novel starts when both protagonists are high school students. Marianne, who belongs to an upper-class family, is portrayed as a proud friendless girl at school, whereas Connell, whose mother is a cleaner at Marianne’s house, is considered very amiable. Even though the two come from socially and economically different backgrounds, both possess a similarity: the absence of their fathers.

We see their love affair develop in an unexpectedly bizarre way. Apart from their apparent dissimilarities, Marianne and Connell are sharp-witted youngsters, which is the main reason for their mutual attraction towards each other. They develop an intimate relationship with a promise to keep it a secret, which contributes to the doubts about each other’s feelings and leads to its abrupt end. But their relationship starts again and the cycle repeats when both meet at Trinity College Dublin. In college, Marianne becomes the popular one whereas Connell loses his charm. However, one thing remains constant and that is the admiration they have for each other. Not only do their feelings remain unchanged, but also their doubts and incapability to express themselves to each other persist.

What if, at some level above or below his own perception, he does actually desire her?

Rooney’s protagonists are drawn with simple features of the very normal people present in the present times. Her very unpretentious, yet effective use of language adequately portrays the sexual agitations of her main characters, along with other issues such as peer pressure and mental exhaustion. What she highlights are the contemporary trivialities of life, the fragilities of today’s relationships and the dilemmas of today’s people. One can see how easily she connects her protagonists and then disconnects them, just like an electronic device being connected to the internet and getting disconnected as soon as the signals are out of reach.

Connell can’t figure out what kind of relationship they are supposed to have now. Are they agreeing not to find each other attractive anymore? When were they supposed to have stopped? Nothing in Marianne’s behaviour gives him any clue. In fact he suspects she is still attracted to him, and that she now finds it funny, like a private joke, to indulge an attraction to someone who could never belong in her world.

It seems very appropriate to say that Connell and Marianne experience life in 3D. The three D’s being ‘Doomed romance’, ‘Doubt about oneself’ and ‘Dublin’. Rooney displays normal people’s longing for belonging through her main characters, who constantly make efforts to be part of the social world or someone else’s life.

…everyone has to pretend not to notice that their social lives are arranged hierarchically, with certain people at the top, some jostling at mid-level, and others lower down. Marianne sometimes sees herself at the very bottom of the ladder…

From Marianne’s deliberate decisions of being with abusive boyfriends to Connell’s mental health issue and his lack of expression, Rooney’s use of colloquial language not only makes it easy for the readers to absorb the complexities of her characters, but it also gives the book a status of being a good read. She realistically paints a picture of the feeling of alienation, be it when her characters are surrounded by people they call friends or when they move to a new place and meet new people.

With a yarn blended with the colours of fragile relationships, uncertainties of human mind and young romance, Rooney knits a warm scarf of present-day relationships with a great triumph, especially for those who have fallen prey to the cold weather of alienation once in their lifetime.

Aleena Farooq is a student on the MA British Studies programme at the Centre for British Studies, Humboldt-Universität, and an aspiring writer. Currently, she is working on her MA thesis which focuses on the sociopolitical exclusion of the Ahmadiyya Muslim Community, a religious minority, in Pakistan and the UK.