While publishers and reviewers might see a new novel by Zadie Smith as an event, Gesa Stedman questions this from the perspective of the reader. Stereotypical characters, a global plot, and an unlikeable protagonist make Swing Time a novel with less than average appeal.

A new novel by Zadie Smith is an event for publishers and reviewers. But is it also an event for readers? Not in the case of Swing Time, the author’s fifth novel which was published in 2016 (Hamish Hamilton/Penguin Random House). 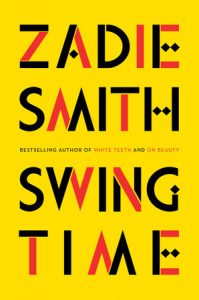 The admittedly stylish book cover, which picks up on the current retro style also used to re-package Chimamanda Ngozi Adichie’s novels and essays, is misleading. This is no bright and breezy take on North London’s music scene. Rather, it is a stilted and artificial story of two would-be dancers who grew up on the same estate in Willesden and what becomes of them. In contrast to Swing Time’s predecessor, NW, which had its flaws but at least managed to project a sense of place, the latest Smith novel seems to float around the globe with no fixed abode. The sense of place is completely absent, which is one of the reasons the novel didn’t work for me. Tracey and the first-person narrator, two ‘brown’ girls,  both go to dancing classes, and compete in dancing contests. While Tracey’s mother spends most of her time either being beaten up by her abusive husband, in and out of prison, or watching TV and shopping, the narrator’s mother is a self-educated leftist intellectual who makes sure her daughter aspires to other things. Tracey becomes a dancer in the chorus for West End shows, before she succumbs to motherhood with multiple and absent fathers. She ends up in the same flat in which she grew up and sends abusive and slightly insane emails to the narrator’s mother, who has become a highly successful Labour local councillor. The nameless, faceless and rather inane narrator goes to university and acquires a degree in media studies, begins to work in television, shares a flat with her postman father, long-since separated from his wife, and is discovered by an Australian-born international pop star  – Aimée – with global reach. She becomes Aimée’s PA and travels the world with her for nearly a decade.

During this time, she loses touch with her family and former friends, neither sings nor dances any more, and becomes particularly involved with an African village in the Gambia and its inhabitants, where Aimée sponsors a school. In the course of this misguided African charity project, Aimée adopts a Gambian baby, probably buying it off its parents, in addition to her two children by birth. This scandal is publicized by the narrator and she is sacked, ending up in London again. Why she should still be tied to Tracey, her childhood ally and rival, is never made entirely clear. And that is just one of the problems of the novel. The narrator is unlikeable and not very interesting. She has got herself out of the estate, in contrast to Tracey, but her thoughts and feelings are rendered in such stereotypical fashion that one soon loses interest. The awfulness of Aimée makes this part of the novel equally uninteresting. Why should we read about a global star and her odd life of nannies, body-guards, smart houses and flats all over the world, and misguided aid attempts in West Africa? This is rightly seen critically, but it isn’t as if the world suffers most from the Kylies and Madonnas with this kind of life-style. Zadie Smith uses the interest in celebrities but doesn’t make anything of it. Nor are the other characters more appealing. They never get a chance since they are all stereotypes. The mother speechifies from day one, and is bad at mothering since she is too intellectual and too much wrapped up in becoming something other than a black woman on a housing estate in Willesden. The fathers are either in prison, fathering new children left, right and centre (Tracey’s father and the fathers of her children), or are upright citizens doing their work and looking after their children (the narrator’s father). None of the other minor or major characters fare any better.

But what really annoyed and upset me in equal measure is the bandwagon on which Zadie Smith has jumped: she sets part of her novel in the Gambia in West Africa, and the rest in New York, London or other capital cities, thus copying a model which younger Afropolitan authors, often educated in Britain or the US, but living in different places and countries, have recently developed and in some cases also questioned. Taiye Selasi, Teju Cole and Chimamanda Ngozi Adichie come to mind. Unfortunately, Zadie Smith’s attempt at reaching out to a globalized readership interested in new perspectives on Africa falls completely flat. I found it patronizing and boring in equal measures. And I wish someone would edit famous writers like they edit less well-known ones. Someone might have told the author that her characters are boring, sound and move like cut-out-cardboard figures and that a concept novel doesn’t necessarily make for good reading.

Zadie Smith was awarded the “Welt-Literaturpreis” in Germany in the autumn of 2016.