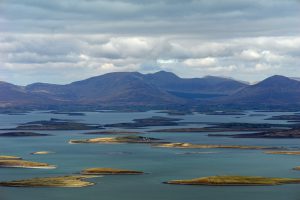 All the reviews printed on the back of the book were right for once: Beatlebone is an exceptional novel. It is formally challenging but it is nevertheless possible to climb into the protagonist’s shoes. I started to read it before I knew that the latter is supposed to be John Lennon, and immediately fell for this slightly mad, obviously troubled man in search of something. Even once I had caught on to the fact that this was a Beatle on the move, and not just anyone, I wanted to read on. It is a demanding novel with stream of consciousness parts, very funny if slightly mad dialogue, and druggie trips thrown in as well. But the characters are likeable – those that we are meant to like – and the writing is excellent. Sensory impressions are conveyed in highly interesting ways, and sensory impressions are very important for the heightened attention that John Lennon pays to smells, light, texture, the feel of his skin, his clothes, sounds, bodily sensations etc. Whenever one might be overwhelmed by these sensations, dialogue or internal commentary undercuts the proximity of reader and character. But these distancing measures never stop the flow, an artful way of dropping the readers into the story, getting them out again but never losing touch with the key character.

The plot itself is quite mad. We get to know the background of the story in an insert which is one of the very few weaker points of the novel. The author-narrator tells us how he travelled to County Mayo and to the islands in Clew Bay, trying to follow in John Lennon’s footsteps, hiding from the paparazzi, attempting to overcome his creative block and finding a new direction for his music in the late 1970s. Personally, I would have preferred less input from Kevin Barry – one could have shortened the whole account of the fact-finding/empathy-experience trip to a one-page appendix. But the rest of the novel is almost flawless and it is alternately moving, funny and challenging, never less so when John Lennon tries to make something of the whole trip in a London studio and drives his sound engineer up the wall – all rendered in Joycean stream-of-consciousness-style.

One might also criticize the book for being a bit harmless – it doesn’t really challenge celebrity culture, traditional Irish masculinity, class and gender issues or any other topic which comes up in the course of John’s musings on his past, being abandoned by his parents, growing up in Liverpool, living in a hotel in New York, being a new father etc. But perhaps this is too much to expect?

In any case, for readers who like formal challenges, irony, and don’t object to looking into John Lennon’s mind, this winner of the Goldsmith Prize, a historical novel with a twist, is well worth a read.

Beatlebone by Kevin Barry, Doubleday 2015.
The history of Lennon’s Irish island Dorinish and its owners after John Lennon can be found here: link to online Guardian article (last access 29 August 2017)