Today, our guest author Anisia Petcu reviews Kate McNaughton’s debut novel How I Lose You for the Literary Field Kaleidoscope:

Writing well is a difficult task. Writing well when your subject is love is even harder. Yet, every now and then, someone gets it right – in this case, that someone is Kate McNaughton.

Generally speaking, having read a book, we tend to place it in a category, a simple mix of words that can come in handy when our friends ask “So what was the book about?”. They ask, and we quickly reach back to our arsenal of words and literary knowledge and produce a result – “a love story”, “a mystery story”, “a family story”, “a story about grief”, “a story about recovery”. We use our short phrase, and we set the tone for the rest of the details, a simple and helpful frame in which to place our characters and plot. There are also books, however, which are not so easy to define – they slip between the cracks, fit several categories, are captured by none. There’s always a little something extra left. How I Lose You, Kate McNaughton’s first novel, is one such book. A love story at first glance, it shifts swiftly between categories, and as the story evolves, I found myself faced with all of the above. 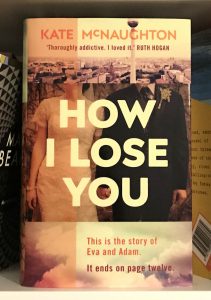 The novel focuses on Eva and her love story with Adam. The book opens with a normal episode of their married life, on their way home after a party with friends. That night, however, Adam dies unexpectedly, which forces Eva to live in a world that has suddenly become foreign, cold and meaningless – “Now, with your lover dead, time collapses in on itself, the landscape becomes a maelstrom around you”. From this point on, the novel is an artful exploration of their relationship and of Eva’s recovery, a skillful back and forth between the past and the present. The chapters come in pairs, focusing on key moments in their relationship and on key moments in Eva’s process of adjustment to her new world of grief, respectively.

Although not its only theme, love is the book’s most skillfully discussed one. Despite the apparently unremarkable character of the episodes described (painting the walls of their new home, rushing to catch a train), the book captures love in what seems to me a pure, tender and simple form. Avoiding clichés, dramatic exaggerations or sugary vocabulary, the author admirably conveys what it means to be in love in an honest, uncomplicated way: a feeling of security, of comfort, of appreciation and trust. A state that does not require daily emotional fireworks and grand gestures, but rather the continual simple joy of shared moments, of building a life together, of trusting your partner and being certain that you understand and value each other.

What also makes the book’s treatment of love remarkable is the fact that Kate McNaughton does not shy away from showing the less beautiful, the petty and the ugly aspects of a relationship. Jealousy, uncertainty, conflict, estrangement and even infidelity are all brought to the fore, proving that a good relationship is not a uniform, carefree journey. Rather, it is a relationship which is aware of its hard times, one in which the partners have to constantly put in the effort, and in which they recognise the value of their bond beyond the moments in which the spark seems to have gone.

Naturally, then, grief also becomes a central theme of the book, as Adam’s sudden death causes a major break in Eva’s life – “There is a person you knew once, in all of his beauty and tenderness and infuriatingness and joy [..] and then there is the moment of his death like poison ivy around your memories of him”. His absence and her mourning are analysed in detail and dealt with in a very sensitive and genuine manner by the author – so much so that I had to ask myself how come Kate McNaughton seems so intimately acquainted with the feeling… she manages to convey the feeling of despair and loss that engulfs Eva after Adam’s death, and the painstaking process through which Eva reconnects with the world and herself.

Apart from its masterly exploration of feelings and relationships, the book is also noteworthy for its surprising plot. In the hope of learning more about the man she had just lost, Eva embarks on an exploratory journey to Berlin, the city where he had spent a good part of his last years. The city is also of special significance in her family history, due to the fact that her mother had fled East Germany as a teenager, leaving behind her family, and unable to return again after the Fall of the Wall. Once in Berlin, Eva makes unexpected discoveries about herself, Adam, and, most importantly, about her family history and her mother’s past. As a reader, what I most appreciated was the fact that up until the very end, the story took unexpected turns.

Having lived in several West European countries herself, Kate McNaughton is very apt at exploring Berlin from the perspective of a newcomer. Aided by her French-English family background, she is also able to capture quite accurately the divided, complex feelings of belonging to more than one place. Her degree in film studies also seems to play a part in her exploration of the city’s past and of Eva’s history. Nevertheless, one aspect of the book that she struggles with is the dialogue – while the narrative and descriptive parts of the text are quite poignant and skillful, most of her dialogue feels rather clumsy, and a little forced. Her characters’ lines and their verbal interactions have a rather artificial air about them, a sort of overworked quality that made me a little too aware of the fact that I was reading a story in a book. This damaged an otherwise good piece of writing, as it broke the spell of the story and didn’t allow me to become fully immersed in the text.

For a literary debut, How I Lose You is a quite impressive feat of emotional exploration. Mixed with a tinge of mystery, history, family drama and loss, it is an engaging story of human experience. Because of its tender tone and honest approach, it is a book that is easy to connect with. In its most skillful moments, it creates a feeling of recognition and understanding in the reader, as it manages to capture in words the elusive, delicate nature of love, grief, and recovery.

A must-read for anyone looking to capture in words a little bit of our elusive human selves.

Kate McNaughton: How I Lose You. London: Doubleday, 2018. (link to the publisher’s book page)