Looking for something to read for the holidays? Gesa Stedman reviews a number of books by Aminatta Forna, Taiye Selasi, Edna O’Brien, and Jenny Offill.

Jenny Offill’s heartbreaking, brilliant, and formally challenging short novel Dept. of Speculation (Granta Books, 2014) is a disturbing account of what happens to a relationship once a child enters the equation. And how badly prepared middle-class academics are for such an event – or rather, the series of events which lead to all kinds of dark places neither of the parents had expected to enter, least the ones concerning themselves and their more or less dissolving partnership. Only to be recommended to readers who are currently not suffering from writer’s block, separation, pregnancy, or any other dangerous form of (creative) life.

Book of the Year in The Guardian, Telegraph, Observer, Irish Times, and New York Times.

In The Hired Man, Aminatta Forna (Bloomsbury 2013) explores the meeting of an English middle-class family with their new Croatian neighbours. Laura and her teenage children spend the summer in Gost, their father is mostly absent but occasionally comes to visit. Duro Kolak lives close by and helps to restore the old house and the mosaic they discover. Told from Duro’s perspective, we learn of his history and how past conflicts from the Balkans war resurface in the old house and how they disturb the equanimity of the English family. Unsettling, and written in excellent prose.

Edna O’Brien’s novel The Little Red Chairs (Faber & Faber 2015) also has a Balkan connection. Why it was a Sunday Times, Observer, Financial Times and Sunday Express Book of the Year left me slightly baffled. A self-styled faith healer arrives in a remote Irish village on the West coast, Fidelma McBride, unwillingly childless, falls under his spell. It turns out he is a wanted war criminal and their encounter leads to a series of more and more horrific events. In contrast to Julie Myerson, I thought the novel creaks at every page and is too clichéd to be really excellent. This is Myerson’s verdict:

it’s impossible not to be knocked out by the sly perfection of O’Brien’s prose. Again and again and with apparent effortlessness, she changes tense (sometimes within a single chapter) or slides out of one character’s headspace and – with an absolutely convincing logic all of her own – into another. The effect is cumulative and the novel’s power creeps up on you; nothing is wasted, nothing forced. Devices that shouldn’t work – conveying lengthy, quasi documentary-style accounts of war through a dream, for instance, or even the dreaded long chunks of dialogue in a kind of foreign speak – work perfectly.
(https://www.theguardian.com/books/2015/nov/08/little-red-chairs-edna-obrien-review last access 1 March 2017) 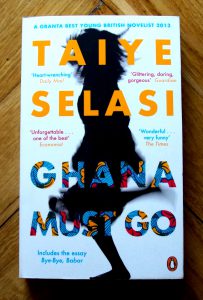 If you are looking for a relatively new and interesting voice, turn to Taiye Selasi’s novel Ghana Must Go (Penguin 2013). Not for the plot, because that, too, is somewhat clichéd. But for the power of voice, the elegance of her prose, and the ability to enter different people’s minds and represent their thoughts and feelings on the page. Ghana Must Go tells the story of one family and how its members manage to negotiate their position both in Ghana, in Nigeria, in London, and in various places in the US. Most of all, it tells the story of how family ties can be broken, how relationships falter, and how for all that material success may bring, the human cost of migration is high. How non-white Americans can or cannot make it in the US is part of the story (less interesting), but the literary representation of how human beings interact when faced with a crisis, and what that kind of trauma can do to children stays with the reader.