Gesa Stedman and Sandra van Lente asked the two new directors of the Literaturhaus in an interview about their experiences with the Literaturhaus’ new concept: whether it has worked so far to engage the whole house in Fasanenstraße in their events, to open up their focus to incorporate European literature and much more. Read on (German version below): 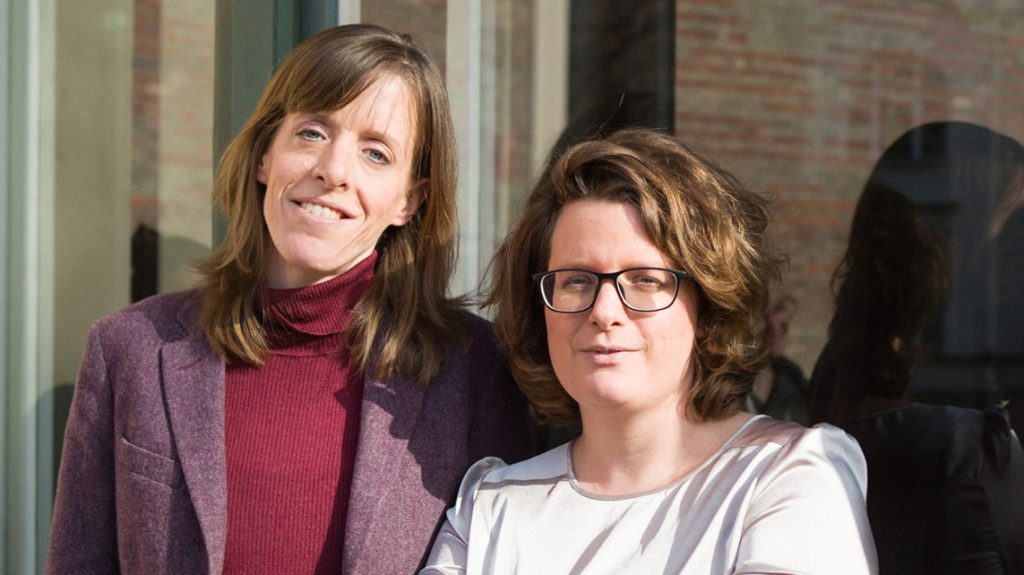 After the first few months in office – how do you reckon it is going?

Janika Gelinek: Very good! The programme started at the beginning of spring on March 20th, and will conclude on the 15th of December, when we plan to end the year with Harry Potter, Matthew Herbert and a small techno party. This means that, in total, there will have been about 122 events that we have put on this year – so we are quite groggy and very happy!

Does the concept of engaging the whole house in Fasanenstraße for events work? How does incorporating the history of the house itself then shape these exhibitions and events?

Yes. As part of our current media art exhibition “Touching from a Distance”, we had for the first time a performance from Jonas Blume in the small apartment upstairs in the roof. In the summer, there was a reading on our terrace with students from Hildesheim and also our new Brown Bag Lunch (a lunchtime event which then had to be moved to the Great Hall because of too many attendees). There is a well-received book exchange shelf in the stairwell, a press-wall, a guestbook (and secretly, I haven’t given up on the dream of having a table-tennis table like in the original house in the 1920s). Next summer, the next step has been planned alongside and in-cooperation with the DAAD’s International Artists’ Programme: six authors will explicitly incorporate our premises – from the garden to the roof – into their presentations in order to develop new reading formats.

What is your biggest challenge in programme planning and how do you meet it?

We want our audiences to have a nice evening: they should enjoy coming to the Literaturhaus, and they should feel at home with us, whether from East or West Berlin, whether from Old or New Berlin, whether they are already retired or still at university or only in primary school. At the same time, every event should have its own tension, its own interest, should tell us and the audience something about literature and the world in which we live, and should raise questions and thoughts that perhaps go beyond the limitations of one evening. That doesn’t always work- you can’t always achieve that kind of connection – but every event is an opportunity to renew our efforts, with commitment and passion.

How do both of your strong European/international orientations come about and how does the Literaturhaus audience take this on?

We have firmly declared the issue of “Europe?” as “Bosses’ Prerogative”: we both consider ourselves to belong to the ERASMUS generation, i.e. we have grown up with a borderless Europe, with non-German friends and partners, and have cross-border study stays and work experience. We are stunned by the public questioning of what we have come to think of as a matter of course – but even a glance at Stefan Zweig’s “World of Yesterday”, written in the midst of the Second World War and in exile, teaches us that these self-evident facts have to be defended again and again. Zweig says: “We believed it would be enough if we thought European and fraternized across nations, if we confessed to our sphere – contemporary, just within a circuit – our aspiration to the ideal of peaceful communication and spiritual fraternity beyond languages and countries.”

In the Literaturhaus, we have the opportunity not only to think in European terms, but also to negotiate the diversity and vitality of Europe, on-stage and with our audience. This includes everything that has gone wrong on the political and discursive levels. On the fifth of May, we celebrated Europe Day in the Literaturhaus with an exhibition, reading, discussion, music – and drinks, from all European member states! We will continue to do so until the day that all of Europe celebrates on the fifth of May…

How do you see the relationship between the Literaturhaus and other literary venues in Berlin, such as the LCB or Lettrétage, etc.?

Relaxed. Or maybe: sportive. On bad days, I avoid looking at the Berlin calendar of events so as not to be disillusioned by the high-calibre competition coming from every corner of the city. At the same time, however, the Literaturhaus Berlin is such a unique and unmistakable place that it presents a wonderful incentive in itself which stimulates competition in the city. In principle, however, Berlin is big enough and the public is interested enough to offer something for all organizers and events!

Are there plans to build associations with academic institutions, e.g. to the degree course of Applied Literary Studies at the FU Berlin?

We already maintain contacts with some academic institutions, such as the Center for Literary Research, with whom which we are organizing a very successful conference in April 2019 on “The Future of Literature”.

What plans are there for the next 6-12 months?

We plan to continue our series on African and Arab literature and revolution in Europe (1968-1989) and expand the children’s programme. We will also have another 24-hour reading, which was so successfully introduced this year with the reading of “Tristram Shandy”, as well as institute the aforementioned summer programme with the DAAD’s international artists. In addition, we are hoping to do a new series – “A Woman Gets Older” – which questions contemporary authors and the (female) literary canon on the topic. The plans, however, are still in their infancy.

Finally, a completely different question, which is aimed at your leadership structure, which is still rather unusual in the cultural and scientific fields: How does the Top-Sharing-Model of dual leadership work? How did you come up with it, how did you apply and how does it work in everyday life?

Several times a week, I thank the good spirits who gave me the inspiration a good two years ago to apply together for the advertised position with Sonja Longolius. It was a relatively spontaneous idea, because I liked the advertisement, but I didn’t feel like taking up such a position on my own – with two small children and the desire to live a life beyond the office (which also seems important to me, to sometimes look over and beyond the rim of one’s plate and try to have a lively and interesting schedule). We have been friends for a long time, and are both in similar life situations, but we have quite different competences and interests, which have proven themselves very well in the everyday of this job. The prerequisite is that you coordinate well, trust the other, and put some back into it, but we both put on only few airs-and-graces and quickly realize when the other has the better idea. You don’t get rich with a shared-leadership job, but definitely much happier!

The interview was kindly translated by Esmé Ellis and Catherine Smith.

Link to the German original of the interview (pdf, 1.05 MB)