“Strength lies in Celtic and European unity” – this could have been the motto of Tuesday’s event entitled Muttersprache which took place at the Centre for British Studies and was co-organised by The Literary Field Kaleidoscope,Literature Wales, the Centre, and The British Council Wales. Gesa Stedman reports on an impressive evening of performance, poetry, and song.

Irish Gaelic poet and spoken-word performer Ciara Ní É, Scottish Gaelic poet and singer Marcas Mac an Tuairneir, and the Welsh national poet and broadcaster Ifor ap Glyn performed and sang their poems for a spell-bound and large audience a few days ago in Berlin. Chaired by Literature Wales CEO Lleucu Siencyn, the three poets each gave an account of their journey towards writing in their respective indigenous languages.

While Ifor ap Glyn speaks English with a London accent and comes from a long-standing diasporic Welsh-speaking family from London, Ciara Ní É’s family don’t speak Irish but she discovered this part of her linguistic heritage as a student of Irish at Trinity and University College, Dublin. She has brought a completely fresh approach to ‘traditional’ Irish poetry by introducing spoken-word performance nights to Ireland, as well as feminism and LGTB themes. Like Ifor ap Glyn, Marcas Mac an Tuairneir speaks English with an English accent – he grew up in Yorkshire – and sought the roots of his diasporic Scottish ancestors by studying their language. Like Ciara Ní É, Marcas Mac an Tuairneir has modernised traditional Gaelic poetry by queering it, an act which is still largely met by silence in the Highlands and Islands of Scotland. Younger speakers and writers however want to be allowed to speak and write the language everywhere, not just in the more tolerant cities, as he explained.

The three poets all agreed that writing in an indigenous language is a political act in itself, no matter how much or how little the topics treated in the poems may be considered political. But because the use of indigenous minority languages means one is part of such a minority, and in a way, speaks for it, the act of speaking and writing itself become political, the ideology is part and parcel of the language use, as Marcas Mac an Tuairneir put it. Interestingly, the two younger poems were quite critical of conservative, older generations of speakers and their attempts at ‘policing’ their respective languages and the ‘correct’ kind of indigenous usage. All three defended the right of young people to decide how to use and develop the small languages and that linguistic diversity as much as social and political diversity was crucial to keep these languages alive and open up these communities to everyone. 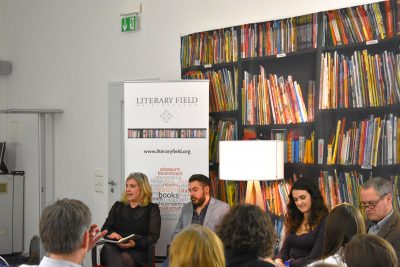 An example was Marcas Mac an Tuairneir’s tongue-in-cheek reference to a highlands & islands courting practice which he queered in one of his poems entitled Night Visit in its English translation, or Ciara Ní É’s feminist song What I Dislike about Irish Women AKA An Open Letter to Boards.ie User Ger Nolan which plays around with and ultimately rejects social media tropes in a highly ironic fashion. A similar topic could be found in Ifor ap Glyn’s poem Neijal in which the correct use of Welsh grammar is valued more highly than attempting to speak Welsh no matter how. This sense of a mythical linguistic ‘purity’ has detrimental effects ultimately, not least because of its notion of cultural exclusivity. That writing in an indigenous language – one’s mothertongue or an acquired mothertongue – can be completely modern was also obvious from Ifor ap Glyn’s poem  Berlins Geistermauer. Psalm an die Überreste der Mauer (9.11.19) which, movingly, he had specially written for the anniversary of the fall of the wall and the Berlin event.

A sense of Celtic unity was one of the lasting impressions of the evening – not least because the wonderful singing, in particular Ciara Ní É’s, demonstrated the linguistic proximity of all three languages. 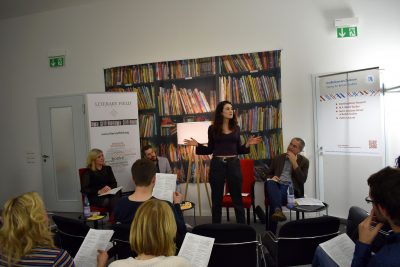 But also there was a sense of a reclaiming of a joint Celtic, orally-inspired heritage based on the Irish-Scottish history of migration, the shared experience of being bi- or even multilingual in a monolingually dominant English world, but with a playful, upbeat, constructive and creative thrust to it that older and more conservative speakers of indigenous languages don’t always share.

It was quite obvious that Wales, Ireland, and Scotland have much in common, not just culturally and linguistically, but across political divides as well. It was also obvious that – although Brexit was not mentioned as such – there is a need for people from those nations affected by its potential outcome to join forces, to hold up their allegiance with one another, but also with their “brothers and sisters from Europe”, as Ifor ap Glyn put it in one of his poems. The evening was also a strong argument for culture, literature, and language and the joys they bring to multinational and multilingual audiences like the one in Berlin which had many nations and many languages apart from English, German, Irish, Scottish, and French present. Without wanting to overemphasise the political impact of poetry: there is more to Britain and its neighbours than Brexit, and there is a story to tell of unity rather than division, of complexity rather than simplicity, and of solidarity rather than hatred. 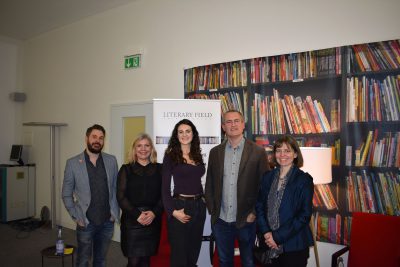