Sonya Permiakova gives an account of the recent Irish women writer’s festival in Berlin which featured Sinead Gleeson and Emilie Pine, amongst others, who give the audience a fascinating insight into the challenges of being a female Irish writer.

Brigid Meets Berlin 2020, a festival of Irish Female Literary Creativity, was organized by the Embassy of Ireland for the second time after a successful inaugural event in 2019. Over the course of two days, the audience had the opportunity to hear a diverse group of Irish women working in a wide range of genres, from poetry to short fiction to non-fiction, read their work and elaborate on their experiences as writers and women navigating the literary field in contemporary Ireland. 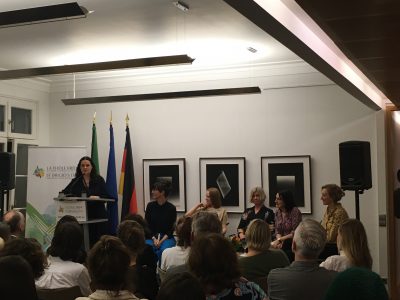 Irish women writers at the Irish Embassy in Berlin photo by S. Permiakova

Emilie Pine was the first to read from her acclaimed essay collection, Notes to Self (2018, Penguin). The essay started as a recollection of an unpleasant experience of a massage done with spicy ointments that burnt on her skin, to which Emilie did not object despite the physical discomfort. The memory of this incident developed into a realization that this silence, inability to object to what is done to one‘s own body, is not a single occurrence but a pattern. The essay conveys the message of reclaiming the female body and all of its experiences. In a discussion that followed the reading, Emilie Pine explained how difficult it was for her to let Notes to Self go out into the world, seeing it as a deeply personal, even intimate work: she spoke about her journey from suggesting to her publisher to perhaps “publish it very quietly” to a gradual realization she has to be “as brave as [her] book”.

Danielle McLaughlin read the short story “The Art of Foot-Binding” from her collection Dinosaurs on Other Planets (2016, Random House), in which a mother comes home to see her young daughter experimenting with the ancient practice of foot-binding after hearing about it at school – in her own words, “to empathize with women who came before”. What shocked McLaughlin when she did her research about this practice is the idea that this is what women did to women: the hereditary nature of violence which one generation of women hands down to the next.

The physicality of female suffering also came out strongly in the biographical essay read by Sinéad Gleeson, whose experience of illness and surviving cancer made her turn to writing as a form of overcoming and remembering pain. In her essay, Sinéad Gleeson writes about how eagerly society labels women as “unmotherly”, “childless” and “barren”, yet never takes into consideration what personal stories of pain and loss are hidden behind those labels. She tells the story of her own battle with cancer, and the bitter irony of her condition: her menstrual cycle stopped due to aggressive medication, and her body was “growing cells” – a process which mimics pregnancy, but was, in fact, her illness. Later on in the discussion, she talked about how the habit of ignoring female pain is common among the medical profession, and how in society pain and enduring pain becomes almost a norm in the life of a woman. Her essays successfully problematize the status-quo.

The final writer on the panel to read her work, Martina Devlin, read from her play, What Would the Countess Say?, adapted from an original short story that appeared in her collection Truth & Dare: Short Stories about Women Who Shaped Ireland (2018, Poolbeg Press). In the play, Countess Markievicz, the most iconic female politician in Irish history, is summoned to modern-day Ireland to pass judgment on contemporary Irish politics. “It is a completely different world, madame, from the one you know,” – our contemporary says to the Countess, and it is in this statement that the irony of the situation is revealed: what we learn from the brilliant women of the past is how little the world has changed, and how women struggle to make their voices heard until this day.

The conversation that continued in between the readings picked up on many of the issues raised in the stories and the essays: how does one write about the body and pain, how can a woman writer claim her space without constantly being told how her writing is “brave” and “confessional”. It is particularly this latter term that the panelists responded to: both Sinéad Gleeson and Emilie Pine felt that the word “confessional” is often used in a diminishing way to pigeon-hole women writers. Sinéad Gleeson talked about how this term is also particularly problematic in Ireland due to its religious connotations: within the context of the church one is supposed to “confess” about stories that are shameful, one is expected to suppress pain and guilt, and it is that guilt and shame that was used to silence women in relation to their own lives and bodies.

At the end of the discussion, Emilie Pine told about a curious incident which brought together many of the themes discussed throughout the night: a few years ago she was writing an article about pregnancy loss in Irish theatre for one of the “big” academic anthologies. She made a decision to mention her own experience of pregnancy loss in the article, to which her editor responded by saying: “Listen, we all loved Notes to Self, but let’s take them out of this”. After giving it a thought, Emilie Pine decided she would not have the article published at all, unless it included her story. The publisher did eventually give in, and at the end of this evening, packed with discussion of pain, loss, body and finding strength in one’s writing, it seemed like a perfect example of claiming space for women and their experiences.

Sonya Permiakova is a lecturer and researcher at The Centre for British Studies, Humboldt-Universität zu Berlin. She is currently finishing her PhD on war poetry written by women in the context of WWI and WWII.