Not even the pandemic could stop art being a sought-after topic on the book market, as art novels, colouring books, art history publications or lavish coffee table books came up for publication in the past year or two. Gesa Stedman takes an interested, if critical look at recent and not so recent trends in this niche of the literary field which – for all its special status – regularly generates quite surprising sales for publishers. 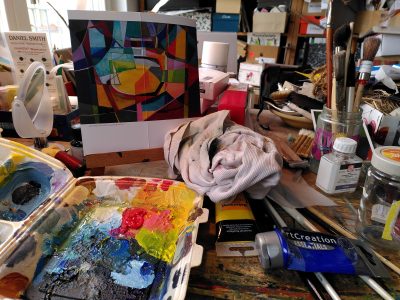 If I had started reading Will Gompertz’ book What Are You Looking At? 150 Years of Modern Art in the Blink of an Eye (2012/2016) by checking the acknowledgement page – as I often do – I would have thrown it out straight away. But because I had begun with his well-written, detailed, and innovative account of modern art, I didn’t. Throw it away, that is. But I found it hard to continue. Gompertz takes a fresh look at art history, he connects all the avant-garde moments of the 20th century with one another, and he does it well. The knowledge he acquired as an art curator – as art director at the Tate and art editor at the BBC – is translated into a highly readable account. The book was rightly praised as “energetic” (quote on the back cover, The Observer). But. There is a big but, connected to my disgust after reading the acknowledgements. Gompertz is an unreconstructed Male Art Historian. Only a tiny number of female artists has made it into his book and most of their works are not discussed at length, nor do we find images reproduced by female artists (4 out of 29). He thus perpetuates art history’s boring old chestnut that genius is male, and the muse if female. Not a position which deserves paperback bestseller figures, and one that has been outdated for quite some time now. In this case, I am inclined to conflate the mainstream version of art history, and the author’s private life and his work. If someone dares thank his wife – in the 21st century – for having looked after four children and her husband and allow him to write the book every weekend, every holiday, and during evenings, I feel propelled back far into the 20th century. There are many famous authors with wives. And where are the famous women writers with “wives”? And the famous women artists with “wives”? Apart, perhaps, from Gertrude Stein? The male bias is alive and well in art history and criticism. This is also true of two otherwise fascinating books by art critic and journalist Hanno Rautenberg. 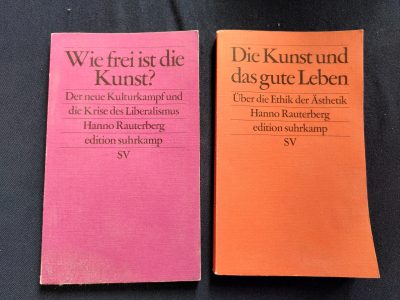 In Die Kunst und das gute Leben and Wie frei ist die Kunst? (Suhrkamp, 2015; 4th ed., 2019) he dissects art in the neoliberal age, how it needs to recalibrate its position in terms of ethics, and how it needs to position itself when confronted with identity questions and censorship. In his otherwise through-provoking pieces, once again, women artists get mentioned a lot less frequently than male ones – a persistent and unfortunate feature of the art market as well as of the book market on art. Practical art books are often published by women writers – Joanna Batsford’s colouring-in books rocked the book market – theoretical ones and art history books are published by male authors.

Art, of course, has a practical side as well as a historical or theoretical one. Even if you don’t practice art yourself, its ubiquity, popularity, and accessibility for almost everyone is obvious. It has left is imprint on the book market. As part of the neoliberal craze for self-optimisation, art plays an important role, often in the guise of “creativity”. Being creative is used as a counterweight against digitalisation, burnout, long hours culture, lockdown etc. Craft books are all the rage and their range is ever-increasing. Colouring-in, hand-lettering, hygge home styling, bullet journaling, pouring acrylics paint, creative doodling – all produce a massive number of enticing titles which indeed get you to put pen or brush on paper. What they do not require you to do is think. These titles are the opposite of reflective, although they often ask you to paint your favourite objects, or draw a dream holiday. But they never demand you to situate your creative activity in any social or political context.

Amongst the legions of how-to books published in the last few years, one stands out: Central St Martin’s Foundation. Key Lessons in Art and Design by Lucy Alexander and Timothy Meara (2019). 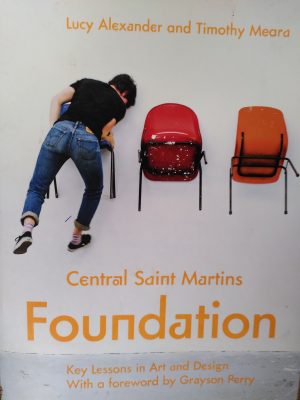 It is published by one of Britain’s leading art colleges, Central St Martin, and consists of a set of diagnostics projects which guide the would-be art student or artist through a progression of techniques, ranging from drawing to textiles and sculpture. The difference to most other titles, aimed at an amateur audience, is two-fold: 1) thinking, researching, reading are integral parts of the production process which does not separate reflection and creativity. On the contrary – one cannot be had without the other. 2) All projects are situated and audience-oriented. The “briefs” – project kick-starters – always ask you to consider social and political issues, even if the actual activity is still based on personal associations, tastes, or experience. But by automatically making art a part of social and political action, the often meaningless sense of simply ‘making art’ by doodling, colouring in, or sketching, is overcome. It is – in the best case – replaced by responsible art which may still help an individual through the making process to feel better but which, crucially, demands of the viewer an equal investment in thinking and reflection that the ‘artist’ had to undergo when completing the different projects. 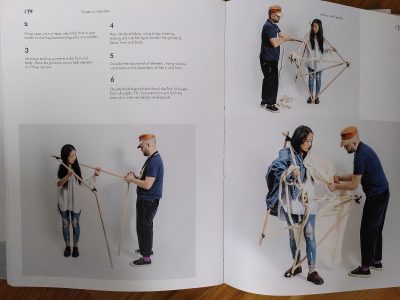 A project brief from “Foundation”

What remains, of course, is what Rauterberg rightly diagnosed: the line between art and activism can be blurred. Some of the student work in Alexander’s and Meara’s book “Foundation” definitely veers towards activism, and could be questioned as works of art – depending on one’s definition of art of course. The borders between aesthetics, politics, and ability are fluid and one sometimes wishes ability and aesthetics were more important. But in view of the bias towards prettification, aestheticisation, depoliticization in many art books, and acceptance of capitalist (art market) laws in much of this sector of the book market, this is a flaw of Foundation which one can easily forgive. It invites the practitioner to settle for her– or himself how to make art which is aesthetic as well as meaningful and not just one or the other.

The book also provides an insight into art practice which neither privileges technique nor mystifies the process of art production. By demanding constant contextualisation it does not pretend that art is the ‘other’ of politics or that it rests solely in individuality which may ignore the needs of audiences, participants, and production contexts.

The book cannot, of course, solve the riddle of how to produce critical art in an era where the market applauds critical art and has absorbed every possible avant-garde position. But it equips the would-be artist with a set of questions and experiences to decide this oneself. Janwillem Schrofer’s book Plan and Play, Play and Plan. Defining Your Art Practice (Amsterdam, Valiz 2018) addresses this conundrum in a very hands-on way by asking the reader/artist to negotiate the constant tension between art and creativity on the one hand, and the pressures of the market on the other consciously, rather than unthinkingly. It advocates collaboration, reflection, realism and allowing oneself to remain on a constant trajectory. Infused with both practical and sociological knowledge the book acts as a welcome counter-discourse against the easy conflation of neoliberal market-speech which one can find in many titles such as in Will Gompertz’ book on creativity (Think Like an Artist and Lead a More Creative, Productive Life, 2015) which buys wholesale the notion that creativity is everywhere and a commodity to be capitalised on in every possible part of artistic and non-artistic production. 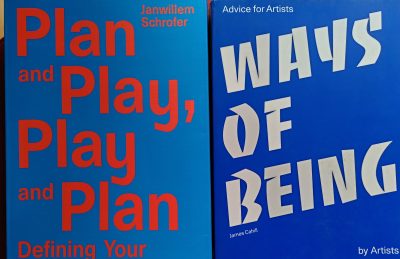 What artists who have already made the leap into the market think about the different stages of their career – including some of the advice given to them by curators such as Schrofer – can be found in a highly readable volume entitled Advice for Artists by Artists. Ways of Being, edited by James Cahill and published by Laurence King Publishing (2018). Subversive, contradictory, dispelling myths as it goes a long, the volume provides readers with short quotations rather than with book-length interviews which anyone who is interested in art can dip into.

How this transition period in art history will develop, no one can know. But at least one can read and think about the issue – unless one is distracted by doodling journals, guides for making art before breakfast, or – worse – painting yourself calm.  If art and capitalism become conflated in this way, how can anyone defend art as the ‘other’ of capitalism’? The same conundrum of course has to be solved by any writer who wants to find a readership, and thus has to sell books, while at the same time maintaining their critical distance from the mainstream book market.