There are 31 wolf packs in Germany.

There are none in the UK.

However, Sarah Hall introduces wolves in her latest novel, The Wolf Border, which are first kept in a closed wolf reserve in the Lake District, and then accidentally-on-purpose released into Scotland, which in the novel has just voted for independence in the summer of 2015.

With the return of wolves on the Continent, a renewed interest in this mythical creature and an increasing number of literary, artistic, and filmic representation are not unexpected. Moreover, there is real-life model for Sarah Hall’s fictional Earl of Annerdale, popularly known as the “wolf man” (link to BBC news magazine). But even if no such contextual link existed, The Wolf Border would still be highly topical since Sarah Hall uses the wolves as metaphor for both individual and socio-political concerns.

Her protagonist Rachel Caine has spent a decade living and working on a wolf reservation in America. She returns to her native Lake District at the instigation of the Earl of Annerdale, who wants to reintroduce wolves on his land. They are supposed to be kept within a fenced-in, if large, area on his estate. However, he secretly allows them to be released over the border to Scotland. Rachel, meanwhile, is pregnant from a rather on-off relationship with Kyle, a fellow worker on the American reservation. After considerable hesitation, she decides to have the baby and consequently has to deal with the difficulty of juggling a career and the needs of her baby. In addition, she is concerned for her brother, who turns out to have a broken marriage due to his drug addiction. She helps him to recover from the addiction, he in turn supports her by looking after his nephew. Rachel is viewed critically by the locals, not least by the keeper of Annerdale estate, but begins a seemingly more lasting and satisfying relationship with the local doctor, the widower Alexander.

The Earl of Annerdale faces opposition of local inhabitants who fear the return of wild beasts and demonstrate against the wolves together with their children. In spite of all the public relations work the team undertakes, the protests continue. When the wolves appear in Scotland, one of them is shot and similar protests occur initially. However, after some time, the wolves head towards the West and deer herds, living in wilder areas in the Highlands. The new Scottish prime minister accepts their presence and quells any public protest; the wolves might even become useful as an instrument to demonstrate Scottish independence and strength opposed to English ineptitude. He asks for Rachel to become his new advisor, a possibility which she considers. The novel, narrated in the present tense throughout, ends with a helicopter flight over Scotland when Rachel and her brother Lawrence, now clean, view the remaining wolves in safety in Scotland. For the time being, wolves can only live in the wild in Scotland, which is portrayed as the more modern, more forward-looking country, leaving behind it class-ridden England and its deep-set fears and constraints. The same seems to be true of Rachel, whose semi-wildness and unconventional life-style might fare better in Scotland as well. That Sarah Hall allows her protagonist whose personal life has been largely problematic and dysfunctional the possibility of a more satisfying prospect of family life than her own childhood offered her, is perhaps the only flaw or moment of fantasy in which the author indulges.

One reviewer accused the author of being overly schematic, and of having written a tame book (link to Alex Clark’s review in the Guardian), a claim with which I strongly disagree. Perhaps the single, female, independent character and viewpoint – including that of the male body, of sex, of intense, sensual representations of motherhood, of landscape, of human intervention into nature – appear schematic to the reviewer. The don’t to me – I found her descriptions as incisive as ever, and the characters as satisfying as the plot resolution.

Sarah Hall’s novels are always compelling, no matter what their subject is (a dam in the Lake District destroying a village, an artist accidentally dying on a hill side and his bereaved daughter contrasted with a dying Italian painter; living with a tattoo artist and in odd sea-side resorts; life in a dystopian, constantly flooded Britain). She is able to draw her readers in every time, and she does so again in The Wolf Border. Deftly interweaving personal and political and social concerns, she creates complex, ambivalent characters and writes about them in clear-cut prose. A writer to watch and one who has deserved not only the inclusion in Granta’s list of best writers (2013) but all the prizes she has hitherto won.

For more information about the author see http://www.sarahhallauthor.com/ 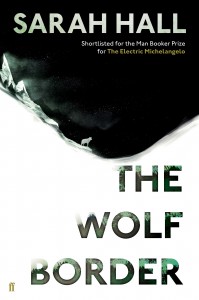 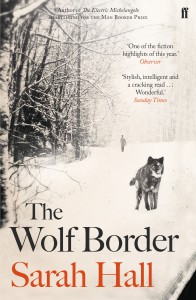