Sandra van Lente went to Harrogate to see what the Theakston Old Peculier Crime Festival was all about. 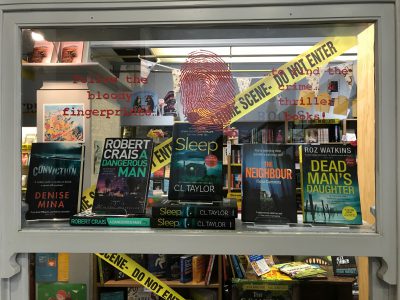 Harrogate is one of “the” places to go you are interested in crime fiction – this seems to be true for readers as well as agents, editors and other “book professionals”. This year, the festival turned 16 and offered several days of one on one talks, panel discussions, book buying and signing opportunities and a space for crime fiction fans to talk about their favourite genre. The book selling was organised by WHSmith and I have to say that I found this a bit irritating – why not ask a local indie bookshop to do it? Well, apparently, the lovely “Imagined Things” bookshop (link to the bookshop) in the town centre has not been around for such a long time and might need to get some more people involved to sell during such a festival (and maybe WHS has a long-term contract? I don’t know), but I hope that in the near future festival goers get to support the local indie on site. 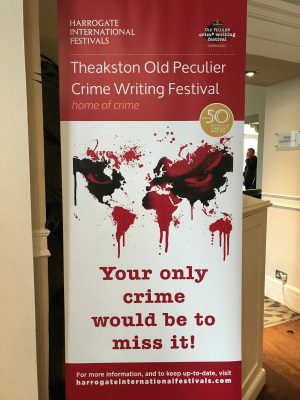 Some things I have picked up while watching the festival from afar so far is that there is always a crime fiction author who gets to curate the programme as a chair – this year it was Mari Hannah, who grew up in London and now lives in Northumberland, the author of the Stone & Oliver crime series, the Ryan & O’Neil series and the DCI Kate Daniels series. And every year, the Theakston Old Peculier Crime Novel of the Year is selected. This year’s award went to Steve Cavanagh for his novel Thirteen (published by Orion, an imprint of Hachette UK). You can find out more about the Theakston Old Peculier Crime Novel of the Year award here: (link to more information about the longlisted books) Aaaaaand, last but not least, the New Blood panel that was created by no other than Val MacDermid, is “one of Harrogate’s most anticipated panels“. I had the great pleasure to experience the ‘New Blood’ panel as well as the ‘Underworld’ panel first hand and soak in the atmosphere of the festival. 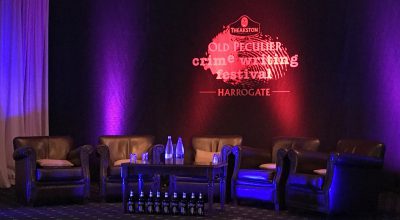 The crime writers on this panel were Jessie Keane, Joseph Knox, Robert Crais and A.A. Dhand. Henry Sutton was the – unfortunately somehow uninspired – chair of this panel. I am not going to sum up their plots and comments now. I just want to share what I enjoyed about this panel (and it was not the cheap jokes about rich people getting robbed, influencers earning money for “nothing”, crime victims over-sharing personal information on instagram and comments about “young people” and social media).

The most interesting contributions were made by AA Dhand. I really appreciated how his comments were a clear counterpoint to the very US-American perspective presented by Robert Crais, who seems to enjoy the ‘goodies’ setting things right and “balancing the scales of justice” more than I do. AA Dhand, on the other hand, seems to enjoy leaving many things open to his readers, encouraging them to challenge their own judgement at times. “I want the audience to be conflicted. It can’t be one-dimensional.”

When I read the blurb on his recent book One Way Out, I did not really think I would want to spend my time on this story (extremism, terrorist threats, blowing up mosques). But the way he presented it was so much cleverer and won me over. And what the blurbs I have read don’t reveal is the parallel family history about racism between the communities his protagonists come from (Sikhs and Muslims); the story in which a 70-year-old racist grandfather suddenly has to deal with his grandchild, prepared to hate them. And the perspective of said grandfather that might make readers understand how grandpa got the way he is. Apparently, this character has been the cause for loads of angry/incredulous fan emails. From what AA Dhand said on the panel, he refuses to write stories that can easily be judged and characters that are predictable. Sounds good to me. I’ve only started with the first book in the series, yet, and I like the pace and the voice so far, so I’ll keep going for a while. 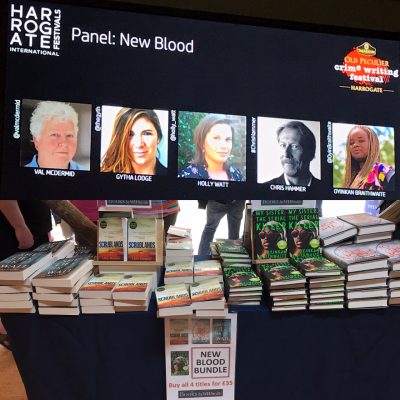 Val McDermid invented this panel and chairs it every year. She handpicks new crime writers she wants to give a platform – and gives them the opportunity to shine. Her motives? Giving her (and the other established crime writers) a “kick up the backside” and find out “who to push under a bus”, cause, let’s face it: “there are only so many books you can buy.” This year’s newcomers were: Oyinkan Braithwaite, Gytha Lodge, Holly Watt, Chris Hammer (link to more New Blood information)

In addition to some very intriguing summaries of their novels (sorry, you have to look them up, I can’t do their pitches any justice here), the crime writers were generously sharing stories about how their books titles such as My Sister the Serial Killer came about (thanks to the agents, quite often) and the trouble retailers can present to them (Val was made to change one of hers to Retribution because the editor cried out how he should sell half of a TS Eliot quote for a title to ASDA and the art director needed a shorter word for the paperback…). I was surprised at how good they were at talking in soundbites (I’m just too slow to write them down). The authors were also happy to give some advice to some even newer writers, explaining how they found their agents, how they finished their books and how to learn to deal with feedback. Gytha Lodge suggested writing for different media, for example: “Writing for theatre is great, because everyone has an opinion.” And the panellists also talked a bit about the darker sides of being an author. “Everybody gets rejected. A lot. […] It happens more often than people think.”

The crowd during this panel was quite receptive and cheerful! And while I know that this panel is about the “new blood”, I have to say that Val McDermid chairing this is absolutely amazing. She is hilarious, cocky and at the same time incredibly sweet about championing these new writers. Whenever one of them ran the risk of not getting across why people should read their books, Val came in and told us why! 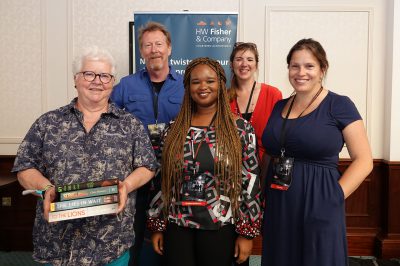 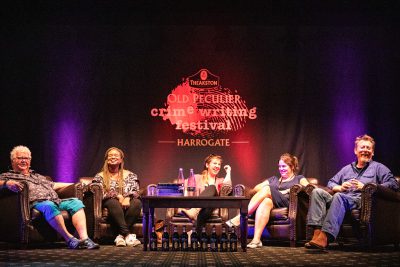 What I have been thinking about a lot lately is audiences – who buys and reads books and what booksellers and publishers think who reads and buys books. Because ultimately this will have an effect on their decisions who to take on and how they package and market the books. So yes, the audience was a bit on the more mature side – in particular during the first sessions. However, what does this even mean? I think my lazy idea (and what I have heard time and again before) was that the crime fiction audience likes their books to follow the genre conventions, is slightly older and very much conservative. And one of the authors on the “Underworld” panel made a comment about Brexit, that was clearly adapted to what he thought about the audience and their political position. It was a very mild statement about some stuff we could all agree on (basically how a few people will get richer through B*) – and I’m positive that this statement would have sounded a lot different facing a younger audience and/or one in London or Glasgow. But are these assumptions justified at all? One elderly woman walked around with a “TRUCK FUMP” badge, others were engaging in a (reverent) conversation about AA Dhand’s novels. Does being old and white and living in Yorkshire automatically mean that you’re rather going for the next Ian Rankin than a debut crime novel with a Black cast that doesn’t go down the urban gang road? But then also: why don’t more younger people and people of colour attend the festival? Well, I hope to find out more about it soon. In the meantime, I have a new pile of novels that want to be read…

You can find out more about the Theakston Old Peculier Crime Writing Festival – and other Harrogate Festivals – via this site: harrogateinternationalfestivals.com/brochures