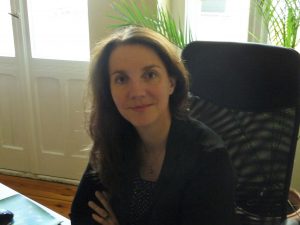 Sandra van Lente interviewed Dr Saskia von Hoegen on her work as a literary agent agency, different legal cultures and changes in the work of agencies through e-publishing.

LFK: Could you briefly explain what your main tasks as an agent are and where your chief areas of activity lie?

SvH: My main tasks are the following: As an agent I am always searching for good stories and interesting narrative voices. I am constantly in contact with the authors we represent in order to develop projects and work on their manuscripts. I am their first – or one of the first – readers and I have to be the most critical one.
I am also regularly in contact with the foreign agencies and publishers we represent in order to be up to date about their news. In addition, I observe the markets and keep in touch with editors to make targeted proposals.
And last, but not least, my colleague and I set up contracts and take care of the administration.
All in all, the main tasks are: working on texts, selling rights, and administering the processes.

LFK: In how far do the laws in the different countries you work in influence your work? Where do you see the biggest difference for your work as agent in Germany compared to the UK or Spain?

SvH: We always have to be very careful when it comes to quotes and copyright as different laws might apply. In Spain, for example, it is much easier to use quotations for free. And in some cases, the book trailers on youtube I receive from my Spanish partners are blocked in Germany because of the music rights… We always try to establish the legislation and jurisdiction of the author’s home country in the contracts. We have to be very careful in this respect, especially when working with US publishers or Amazon.

LFK: Do you feel there are differences for your work for different genres? For example for books written by women or ethnic minority writers or for translated works?

SvH: Actually there are a lot of opportunities for female authors. There are still genres that are regarded as “male” or “female”, but in commercial fiction editors have been looking for female authors and female protagonists in the last years – and not only “chicklit” or other romantic stuff, but also in historical novels and even thrillers and crime fiction.
In literary fiction, women still have a more difficult standing, but there is also an increased interest in “strong female voices”.
In the case of translated works it depends on the language. There are a lot of translations in English language literature. For other languages such as Spanish the bar is high, because translations always mean higher costs.

LFK: How did the job profiles in your line of work change through e-publishing and self-publishing? How has your work changed in the last 10 years? Are there tasks you do more often now or new services you offer?

SvH: Until now e-publishing and self-publishing have not brought many changes to our work profiles, but I think they will. The most important change is that we have to be aware of the fact that we are working with contents and become familiar with the increasing possibilities to publish and sell these contents.
E-publishing has become another format in addition to hardcover, trade, pocket and audio and we usually licence it together with the other formats. But it is increasingly turning into an independent format. There are certain kinds of books that could be published as e-books right from the start, in my opinion, I mean books that you “consume” e.g. on a journey and don’t need to have in your bookshelf. As we don’t sell paper but contents theoretically we could sell these contents directly for the e-book. Some problems arise, however: the profit margin for the author and therefore also for the agent is very small, and digital publishers don’t translate. And – very important – most of the authors still want to see their works in print.
The work of the agents is changing, indeed: as a consequence of the changes within many publishing houses agents increasingly become editors. In Spain we have a lot of agencies that offer editorial services including proofreading, marketing and even the publication on the agencies e-platform.

LFK: In how far do you think it is problematic if agents take over an increasing amount of work that used to be the publishers’ core tasks?

SvH: It’s a problem for the publishers to become just “product sellers” and I think that’s not what they want to be. And luckily there are still publishers and editors who are a lot more than that!
For the agencies it is a problem to assume a publisher’s tasks, because agents don’t have the time and the resources. Furthermore, they are not payed for it. In Germany, the characteristic of a serious agency is that the author does not pay anything up front. The agent will only get a commission on the rights sold.
So on the one hand, an agency cannot assume all editing tasks without any payment, and on the other hand, if an agency offered editing services at cost, this would create the expectation of a guaranteed publication. However, the agency cannot guarantee that a book will be published. Sometimes even very good books remain unpublished.

About the interview partner:

Dr Saskia von Hoegen is a literary agent based in Berlin. She represents German and Spanish speaking authors worldwide and is specialized in Spanish, Dutch and German language territories. The agency also represents foreign publishers in Germany, the Netherlands and Spain. Link to the agency’s website: http://www.saskiavonhoegen.de/