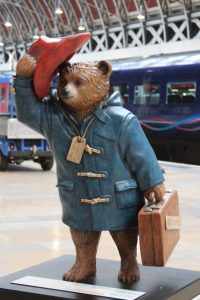 Michael Bond has died aged 91. Although well-known to many, his fame is by far outdone by his famous creation, Paddington bear, who arrived at Paddington Station from “Darkest Peru” in 1958. In his blue duffle-coat, wearing Wellingtons and a red hat, reminiscent of WWII child refugees with labels around their necks, Paddington was picked up by the Brown family and has had adventures ever since. Although one might want to criticize Bond for associating Peru with “darkness”, at least Paddington bear can stand for the current predicament of many contemporary refugees: the arrival in an unknown place with only a small suitcase, not much food (except a pot of marmalade in Paddington’s case), and no idea where to turn to next. “In later life, Bond was touched by many letters from child immigrants who told him about their own fresh starts in England, just like Paddington’s: many liked the way the bear politely challenged authority. By the time of the 2014 Paddington film, Bond’s bear was a benign signifier of welcomed migration”, as Veronica Horwell writes in The Guardian,  28 June 2017 (link to the article). One can only hope that others in the same situation find a family such as the Browns who take the label hanging around Paddington’s neck seriously: please look after this bear. They do, and accompany Paddington in all his pursuits, teaching him the English way of life as they go along. Admittedly, a rather limited vision of Englishness, and an affluent middle-class one at that. Nevertheless, Michael Bond created a much-loved and often adapted and widely translated body of stories which resonate with readers (and today: with viewers). One can only hope that wherever he may be now, someone “looks after this author”.