Gesa Stedman reviews Rachel Seiffert’s latest novel, set in Ukraine in 1941, which is as devastating as it is masterful. 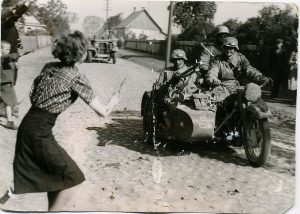 A Ukranian woman and a boy welcome soldiers of the German Wehrmacht entering their village in 1941 (© ww2gallery, CC BY-NC 2.0)

Ukraine, 1941. Two boys, on the run. A German road engineer, waking to the sounds of German soldiers rounding up Jews. The schoolmaster, his elderly mother, his wife and their daughter herded and bullied, imprisoned in large barracks. Thus Rachel Seiffert sets the scene for her third novel and fifth book-length publication. She returns to the difficult terrain she first wrote about in the collection of three stories entitled The Dark Room, which impressed critics, prize judges and readers in 2001: Nazi collaboration, Täterkinder, and the complex relationship of Germany with its Nazi past. This time, the author enters the minds of two Jewish boys who manage to flee from Wehrmacht and SS persecution while their father, the schoolmaster, hopes they may avoid being caught as he himself waits to be deported. Otto Pohl, the German engineer, is part of Operation Todt, building roads for the advancing German army, and at odds with his superiors and the SS. The boys are found and kept hidden by Yasia, who has come into town from her farming village to see her fiancé, Mykola, who has signed up with the Germans. She never meets Mykola but in the end, Yasia manages to keep the boys hidden, first at her uncle’s workshop in town, later they flee into the deep countryside where they go to a relative’s village since Yasia may not go home again after having been seen by her uncle’s neighbours as harbouring Jews. The boys are christened Yheven and Mirek. One may hope that they survive the war but their fate, and Yasia’s, are left open.

The novel enters uncomfortable territory, but it does so in such a powerful way that it is impossible to put it down before one has finished it. Rachel Seiffert has a background in film writing and editing. This is visible and audible in the way she sets her scenes, and in her sparse prose which concentrates on the essentials. She allows the reader to make her own judgements and to draw her own conclusions. Adjectives are few and far between, and usually reserved for the description of scenes and settings. While this style is reminiscent of much of contemporary German writing – not surprisingly perhaps, since Rachel Seiffert is bilingual in German and English and has German and Australian parents – it is different in one crucial respect: Rachel Seiffert may leave out the adjectives and the exclamation marks. But she does not leave out emotion or sensory experience. The combination of a stark, economical style and the horrendous as well as the life-affirming moments in her novel create a particular tension and a unique way of writing which mesmerises the reader.

If there is any fault at all in this novel, it might be the hopeful end which leaves the reader with the sense that redemption might be possible. Since individual stories always have a kind of metonymic function where one story stands in for all other potential stories, the almost-happy ending might indicate that at the end what will be remembered is the survival of the two Jewish boys, not the mass killing, the persecution and pogroms which happened in Ukraine and elsewhere. This could be read as a concession to middle-class readers who need some kind of hope in order to be able to survive the imaginary but very realistic experience they have just gone through. In real life, not that many Jews were hidden by Ukranians or survived the pogroms. Equally, not that many good Germans existed either, who questioned Nazi politics. However, how complex everyday life became for Germans under Nazi rule, and what it was like to be governed by others, and how communities react to those stigmatised, can all be learned from A Boy in Winter. It is a timely reminder that one can be caught up in momentous events at any minute in one’s life and that taking a stance, resisting may be called upon at very short notice. But beyond any political impact that the novel might have: it is an excellent piece of contemporary prose which has been rightly acclaimed by many reviewers and will hopefully be read by many.

More about the author’s background and the novel can be found here: link to Guardian article
Reviews by the late Helen Dunmore (link) and Lesley McDowell (link) (last access 13 July 2017)