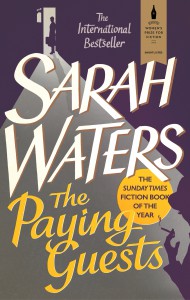 London 1922. Historical crime fiction. Genteel Mrs Wray and her bored daughter Frances take in lodgers, Lilian and Leonard Barber, because they can no longer manage the upkeep of their London villa without additional financial income.

Their routine is disturbed but Frances, who had an affair with a female friend before which her mother suppressed, falls for Lilian, with whom she accidentally-on-purpose ends up killing Leonard. A young man is acquitted of the murder at a lengthy trial. Inspector Kemp delves deep but not quite deep enough into the strange goings-on in the Wray’s household and although he gets near to solving the crime, in the end Lillian and Frances walk free.

Based on true-crime cases of the early 20th century, the novel recreates post-WWI life in London in the greatest possible detail. We hear endlessly how Frances cleans the villa, what meals she prepares and how she does it, and with equal detail we learn how Frances and Lilian kill Leonard and dispose of his body, how the police proceed with the case, and what happens in court – 600 pages of it. Contrary to most other reviews, I didn’t get hooked by this Sarah Waters’ novel. It is too long, it is too meticulously researched but not really well-written. Not in any technical sense of course, Sarah Waters is an accomplished writer. But the characters are not likeable, there is no real sense why we should learn so much about them, since they never reach out to us enough to make them interesting, and not even the sex is particularly exciting. True crime is too obviously the genre from which the novel draws its inspiration. Too much period detail and too little really engaging writing. A good editor might have intervened and by cutting out some of the long-winded passages might have helped to focus the novel. Whether unlikeable characters are redeemable is another question. The Paying Guests was a New York Times bestseller and Notable Book of the Year and shortlisted for the Bailey’s Prize for Women’s Fiction in 2015 – why that was the case eludes this reviewer entirely.