For the first time in a loooong time, I’ve attended a literature event: the African Book Festival in Berlin, run by InterKontinental and curated by Kalaf Epalanga. This year’s festival highlighted the craft of authors and artists from Angola, but the programme also included, among others, authors from Nigeria, South Africa, and Ghana.

“Telling the Origins Story”, “Writing in Troubled Times” and questions of (perceived) responsibility were meant to be the guiding themes. But actually, what struck me personally as recurring theme(s) was that storytelling is much more than ‘just’ the written word and the strong connection of the guests’ work to music!

So here are some impressions from the festival: 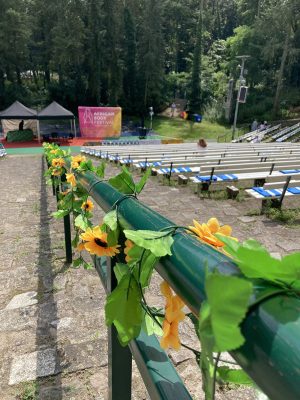 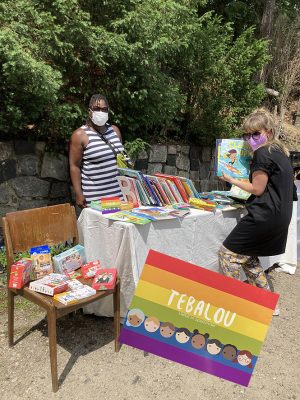 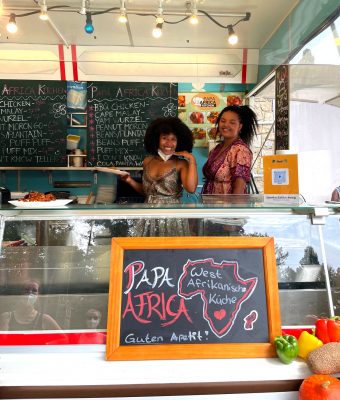 The Freiluftkino Rehberge in Wedding was a really nice option to get out of the lovely, but problematic-in-pandemic-times Babylon Cinema in Mitte. In addition to a well-stocked book stand from InterKontinental, the festival hosted a number of Afro-German-run businesses: tea, fabrics, toys and children’s books (Tebalou!), clothes and accessories, skin care, food – they all contributed to the bustling and welcoming atmosphere (InterKontinental also showcased them on their Instagram profile if you want to have a look: www.instagram.com/ikontinental).

The weather was very sunny – with a Regenbruch on Saturday. And, of course, I managed to get soaked on my bike and put the poor book I had just bought to an unfair test (30min of hard rain = not a good idea). On the second day, I came with a waterproof bag, an umbrella and used public transport. No need to say that there wasn’t even one dark cloud to be seen…

What was a bit spine-chilling, though, was the fact that the location is situated on the edge of the so-called “African Viertel” with streets named after colonial criminals and places in Africa that were colonised as well as the weird “Schreber-gardens” with problematic names – and flags. I learned that some of the gardens were renamed and that some streets are going to be renamed, too (apparently, the decision was made in 2018), but this hasn’t happened on a larger scale, yet. That’s not new, I know, but that does not make it any less problematic and I thought a lot about how Black and people of colour might feel in this space. A couple of people I spoke to shared my discomfort, but didn’t criticise the choice of location in this context – it was just a reminder that there is still so much do be done…

But to quote Musa Okwonga from the first panel: “Let’s talk about the work”. 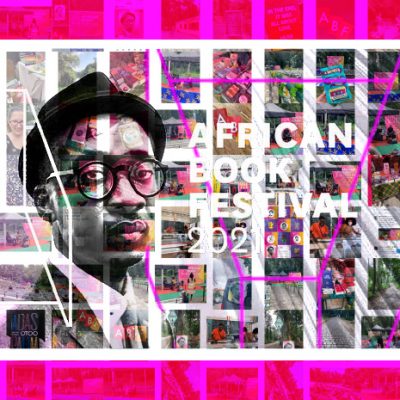 Kalaf Epalanga curated this year’s ABF – and apparently, the task demanded lots of patience and improvisation. The stupid pandemic made them change their plans over and over again, even on the days of the festival, but this did not make it any less enjoyable. It was great to hear him speak about his own writing and music-making as well as how he became the ABF2021 curator: In a nutshell, he missed the lusophone authors in MANY festivals about ‘African literature’ and the “talked it into being”, as he said, by sharing this observations with everyone who would listen to him. Stefanie Hirsbrunner and Karla Kutzner did listen, indeed, hired him – and he brought together an amazing group of people.

As the connection between music and literature seems to be very strong in his personal life, he also brought this to the festival. Many of the authors mentioned or showed in their work how rhythm and music can find their way into literature, how storytelling and music are connected and how a literature festival can be so much more inclusive and interesting by not creating artificial borders between different forms of art!

I would like to dedicate a little paragraph to the wonderful chairs of the festival. Some of you might already know about my admiration for Musa Okwonga, for the others: he’s brilliant – don’t take my word, see and read for yourself. I loved his contribution in The Good Immigrant, then discovered his brilliant football commentator skills, cried through In the end it was all about Love and am just always blown away by the kindness he shows wherever he goes. (I’m still trying to get my hands on the New York Times where he made the front page with a piece about England and the English team.) Anyway, I’m getting carried away.

He chaired the first reading and discussion with South African writer Marita van der Vyver and his questions were so spot-on, you could see he had really engaged with her texts, asked about the craft and choices of her technique rather than ‘just’ focusing on the Angolan War she writes about and effortlessly linked the past she wrote about with contemporary problems. If all chairs were like this, I’d go to more festivals.

At this ABF, I fell in love with another chair: Alexandra Antwi-Boasiako. She chaired the “Your Next Good Reads” panels, in which three authors shared their favourite books, recommendations for authors to watch and some more insights into their strategies to write and cope with life. I felt she really got the best out of them all, made them feel comfortable and open up – and generally turned it into a highly entertaining time. About Bisi Adjapon she said: “You will like her as a person and then you will want to read everything from her – even if it’s on a t-shirt.” And she also tirelessly promoted indie bookshops, so here we go. I did enjoy the other conversations, too, don’t get me wrong – in particular also those where it was more of a dialogue between two creatives – but those two really brought it home for me. 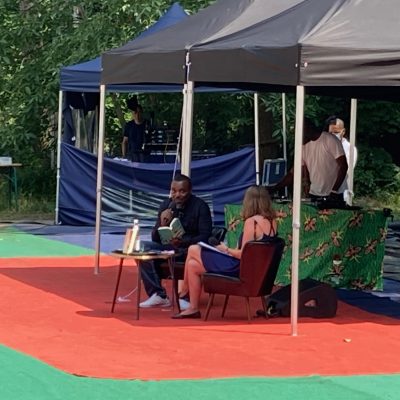 A recurring question of the festival circled around whether the authors felt some sort of responsibility to tell the stories they tell, to be a public figure etc. It seemed a bit predictable, but the answers were not! On the contrary, while all authors write highly political text (judging from the readings and the information shared about their books), many had in common that they rejected the roles their literary fields tried to assign them.

Chimaka Garricks, for example, shared how he wrote his first book about the complicated conflicts in the Niger Delta to channel or overcome his anger, but then wanted to write about something else so he wouldn’t be seen as a commentator on that only: “I don’t wanna be the Niger Delta writer. I am more than that.” And I think it’s fair to say he blew us all away with his reading of a very intense short story published in A Broken People’s Playlist (Masobe, 2020) – yet another wonderful example of the fusion of music and storytelling on paper.

I tried to find the right words for the conversation between Leye Adenle and Ondjaki on the first day, and I’m still not sure whether I got it right. It seemed to me as if they were deliberately performing their rejection of performing, if that makes any sense. I can only imagine how annoying it must be to be asked the same predictable questions over and over again (not least the ones that reveal essentialist ideas about ‘Africa’ and what ‘African writing’ is).

In any case, I’m curious about their books, not least Leye Adenle’s crime fiction centering protagonist Amaka (Easy Motion Tourist (2017) and When Trouble Sleeps (2018), both from Cassava Republic) and Ondjaki’s Transparent City (Biblioasis, 2018; transl. from Portuguese by Stephen Henighan, also available in German transl. by Michael Kegler) that was described by the festival as “a poetic satire on post-colonial and post-socialist, real life Angola, a declaration of love to the people of Luanda”. 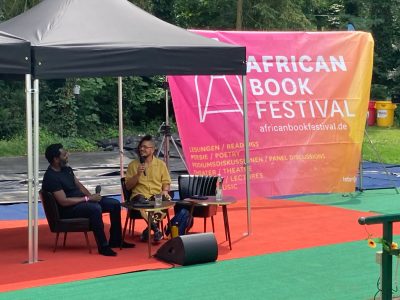 Kalaf Epalanga told us how the best storytellers he knows have no books to their name while at the same time being such an incredible inspiration for his own storytelling. Music was his first creative outlet – and he is world-famous with his group Buraka Som Sistema – but he discovered the connection between music and literature, not least through poetry and the rhythm of the drums and techno. Kalaf Epalanga continued to fuse his conversations with music and it made me want to hear and read more! His novel Também os Brancos Sabem Dançar (“Whites Can Dance Too”) was acquired by Faber. You can find an excerpt here, translated by Jethro Soutar: link to the story in Bakwa Magazine.

Another guest who shared insights into a different kind of storytelling was Joanna Legid who tells stories through photography. She shared how she couldn’t make a choice which language to write in (something I can really relate to) as she speaks French, German, and English equally well – and so she chose photography to tell the stories that are important to her. Also, she works predominantly with women and spoke about how the work with them was an inspiring and empowering experience for both sides.

I might repeat myself, but I really enjoyed how the festival was curated and that it rejected narrow definitions of literature and storytelling. Unfortunately, I missed the performances on both days, but they sounded like the perfect conclusions of the days.

ABF – Back for More

Even though, unfortunately, I couldn’t attend all panels, I immensely enjoyed the festival. The atmosphere was very nice, there were lots of friendly people and the conversations were inspiring. I was very happy to meet Yasemin Altınay from Literarische Diverse in person! It was SO nice to finally meet in person and I had the feeling that’s what many people felt. I’m already looking forward to the African Book Festival next year.

For those of you who have missed it, there are some impressions on Instagram (@iKontinental (link) and @abfberlin (link)) – and, of course, there is always the InterKontinental bokshop! For those in Berlin: it’s close to Ostkreuz in Sonntagsstraße; for those who can’t go there in person, Alexandra Antwi-Boasiako told us not to let distance stop us: “the Internet can help!” InterKontinental have a nice online shop, recommend books over the phone and deliver the books promptly (www.interkontinental.org).

What Should I Read Next?!

Each day of the festival had a “What should I read next” panel with authors, chaired by Alexandra Antwi-Boasiako. I tried to catch as much as possible – here’s my attempt at a summary (but I’m sure, the good people at the InterKontinental bookshop are happy to help you with more details):

And last, but not least, not another book recommendation, but two book blogs:

James Murua: James Murua Literary. Archiving African and Black Literature, www.jamesmurua.com (reviews – also a recent one about literary magazines, podcasts, events etc. – I first learned about him at a previous African Book Festival)
and
Charlott Schönwetter: Have You Read…?, www.haveyouread.de/podcast, and www.instagram.com/half_book_and_co (podcast and reviews)