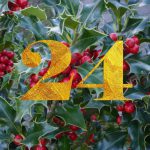 For this last post of our Literary Field Adventskalender we chose to share a very special concert: The British Parliamentary Choir and the choir of the Deutsche Bundestag gave a concert in Berlin on 12 December 2016. The first joint concert was held in July 2014 in Westminster Hall to commemorate the centenary of the outbreak of the First World War and the tercentenary of the Hanoverian accession to the British throne. They wanted to “demonstrate the friendship which exists between Germany and the United Kingdom and the opportunities for cultural exchange between our two countries.”

The President of the Bundestag, Norbert Lammert, addressed the British EU referendum head-on and couldn’t resist to comment that many Germans regretted the outcome. He emphasised that Germany was still interested to maintain a close relationship with the UK – and while he admitted that communication in the European arena was often challenging, he welcomed the universal nature of music, quoting the great musician Yehudi Menuhin who said: “Singing is the true mother tongue of all human beings.” The Leader of the House of Commons David Lidington (understandably) adressed the Brexit topic less directly and praised the choirs attempts to “carry out cultural diplomacy through music”. Lidington said: “We politicians are often told that we campaign in poetry but have to govern in prose. But it is when we are singing together we are best able to express the feelings of mutual understanding and a shared cultural tradition which bind our two nations.”

You can find my favourite song (and the first one) at minute 16:10 and one of my favourite moments at 1:10:20 when the two directors – Simon Over (UK) and Žarko Bulajić (Germany) – join forces and try to conduct the choir as well as the audience. I can only speak for myself, of course, but I thought it was a wonderful evening celebrating the multiple ways of exchange between our cultures in the past and the present.

Wishing you a merry & peaceful Christmas, a wonderful winter break and a happy new year!