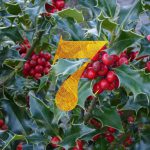 This has become our Scottish week! The great Scottish writer Denise Mina came over for a public reading and we had a passage from her novel “Blood Salt Water” in our Adventskalender on Monday. Today, Gerry Mooney from Glasgow reads out a song about love in the time of rebellion written by Frank and Seán O’Meara. And, who knows, maybe you can discover even more Scottish readers and texts this week… Stay tuned!

“Grace” was written as a song by Frank and Seán O’Meara. It commemorates an event that took place 100 years ago during the Irish Easter Rebellion in 1916 that led to the creation of an Irish Republic. “Grace” refers to Grace Evelyn Gifford Plunkett, who married one of the leaders of the Irish uprising in 1916. This is the story about her wedding to Joseph Plunkett, who was to be executed on the following day.

Gerry Mooney is a Senior Lecturer and Staff Tutor at the Open University in Scotland, Faculty of Arts & Social Sciences. He also teaches classes on social stratification at the Centre for British Studies, Berlin.