Our guest author Jana Wiggenhauser writes about the Refugee Tales project, questions of representation and agency, the power of storytelling, and what might happen if people actually listen and take action.

“Maybe the real story begins here
in this office, before you press record
and we look in the mirror of each other’s eyes, we’re
first time meeting; maybe you say the word
‘Refugee’ in your head when you call me Farida,
Refugee, what is that burn mark on your hand?
You already have a story of the torture
I suffered in my war-torn homeland.”

Ever since the so-called ‘refugee crisis’ of 2015, the topics of migration and asylum have dominated popular, media and political discourses. Many of these discourses have created stigmatising stereotypes of ‘the refugee’ while the voices of forced migrants themselves have often remain absent. Rather than functioning as a mere bystander, contemporary art projects have sought to challenge these discourses by highlighting the perspectives of those who have been marginalised. Among them is the project Refugee Tales which uses one of the oldest forms of sharing knowledge: storytelling.

Refugee Tales emphasises that storytelling is an act of both speaking and listening. Starting in 2015, the project organises public walks during which the participants, among them forced migrants, bring the stories of people who have experienced immigration detention to British audiences. Additionally, the stories have been published as anthologies edited by David Herd and Anna Pincus.

The Refugee Tales project has called for an end to indefinite immigration detention in Britain. Today, the UK is the only country in Europe that detains foreign nationals indefinitely whereas detention in other countries lasts up to 28 days. According to Home Office statistics, over 27,000 foreign national citizens were held in detention in 2017. Since detained persons do not know if or when they shall be deported or released, they are confined to wait in a state of limbo, which bears great psychological challenges.

The stories of Refugee Tales are created as a collaboration between established British writers and a (formerly) detained person who orally tells his or her story to the author. The authors are then free in their literary choices to re-tell the stories they have heard. In homage to the Canterbury Tales, each story is named after a specific person’s ‘tale’, such as David Herd’s “The Appellant’s Tale”, Marina Lewycka’s “The Dependant’s Tale” or Ali Smith’s “The Detainee’s Tale”. While the term ‘tale’ stands in contrast to the project’s explicit claim of the stories to be grounded in reality, it draws on the concept of sharing stories, so they can ‘travel’ from person to person and from place to place.

The first walk of Refugee Tales took place in June 2015. Coinciding with the ancient travelling route of the Pilgrim’s Way, participants, among them former migration detainees, walked for nine days. At every stop, there was a storytelling event. In the prologue to the anthology of 2016, David Herd describes this first Refugee Tales walk as a “spectacle of welcome”: at any point along the route, there were between 80 and 150 participants in bright blue t-shirts. By visibly crossing the idiomatic English landscape with persons who are otherwise rendered invisible by state practices, the walk challenged the notions of national space.

While the literary anthologies of Refugee Tales might not reach those who fear migration, the walks themselves typically cross more conservative English towns, where walkers and residents with different political views may encounter and converse with one another. The project invites the general public to join the evening storytelling sessions, which are held in prominent places, such as town or church halls. As a walking project, Refugee Tales succeeds in bringing counternarratives about the British asylum system to people who might otherwise not hear them.

After a successful crowdfunding campaign in July 2018, readings of 28 Refugee Tales stories by prominent British writers and actors were filmed and published on the website 28 Tales for 28 Days (link to website). Their voices are included in a short statement film (link to film) which the project has launched in October 2018. Even more people from the UK’s artistic scene have thus joined the Refugee Tales project to further raise public awareness for its political cause. 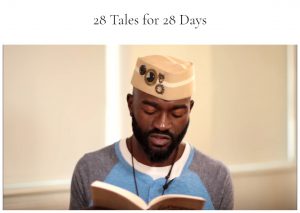 In Refugee Tales, many prisms of interpretations are added, as the stories show the interplay of the storytellers and the story-listeners who receive the story and relate it back to their own life-world. As a result, the authors are able to deliver a striking criticism of the state’s practices in the British asylum and detention system.

However, the representation of forced migrants by British authors can be understood as problematic since it reproduces existing hierarchies of power and reinforces divisions of ‘us’ and ‘them’. Once again, forced migrants do not speak on behalf of themselves; instead, others narrate their stories. According to the project initiators, this narrative decision was arrived at in order to maintain anonymity of the participants and remain sensitive to any residual trauma. Yet, as Refugee Tales enters its fourth year, forced migrants have begun to play a larger role in storytelling events during the public walks. Bearing this development in mind, perhaps they will be the authors of their own stories in future anthologies, as well.

Ultimately, one might question if storytelling can in fact lead to a meaningful change of perspective or inspire political activism. Audiences might be emotionally touched by the stories, yet their estrangement from the narrated experiences might foreclose any real-world actions. Refugee Tales tries to counter this problem by employing narrative structures in which ‘British’ first-person narrators function as learning intermediators. In Ali Smith’s “The Detainee’s Tale”, the narrator only begins to understand the other person’s story after visiting a detention centre: “Airless, the room, and its windows barred and perplexed – and suddenly I’ll understand what you were telling me this morning, about how a window, when no air can come through it, isn’t the same thing as a window.”

Through the use of storytelling, the project confronts its audiences with the conditions forced migrants endure in immigration detention. Listening to Refugee Tales invites audiences to reflect on their own roles and responsibilities. The project highlights the importance of local activism, such as writing to local MPs or volunteering in detainee visitors group. On their website, Refugee Tales offers insight into how to support the case for an end to indefinite detention.

Jana Wiggenhauser is an alumna of the Master student in British Studies at the Centre for British Studies, Humboldt-Universität zu Berlin. She specialised in Culture and Literature and wrote her thesis on migration and refugee studies.