There are only a few books that can reveal the condition of being-in-the-world through the phenomenal power of language. Ali Smith’s How to Be Both is one of them, as Alican Akyüz finds in his review. 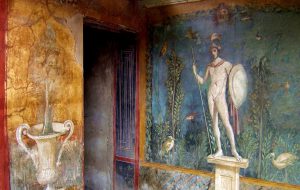 Fresco in the House of Venus in the Shell, Pompeii (CC0)

In 1969, B. S. Johnson published The Unfortunates, a book that comes with 27 chapters in a box. The first and last chapters of the story are indicated in the box, but you are free to read the remaining 25 chapters in any order you like. In other words, you are free to write your own story out of those 25 chapters. Can you think of a more experimental and complex way of constructing a narrative? If not, you haven’t yet met Ali Smith’s How to Be Both, a book that gives you the chance to decide on your reading experience.

When you go to a bookshop – either a real one surrounded with the magical smell of books or a vapid, online one – and find How to Be Both on a shelf, it is likely that you will actually see two different books starting with different stories. This is because the book was simultaneously published in two different versions and each version starts with a different story. You, as the reader, have the chance to decide which one out of the two main stories you want to read first. Your decision changes the reading experience completely. As Ali Smith herself says, “there are two ways to read this novel, but you’re stuck with it – you’ll end up reading one of them.” The irresistibly poetic language of the book will take you to the last page all in one breath, where you can’t help but wonder what it would be like to read the second story first.

The two parts of the book are set in totally different times and places; one in contemporary Cambridge and the other in Renaissance-era Ferrara, Italy. The contemporary story is told by George, a teenage girl whose mother, an online activist, has recently passed away. George struggles to resign herself to the death of her mother and constantly recalls memories of her. Meanwhile she takes care of her younger brother, deals with her alcoholic father, and experiences another loss as her friend ‘H’ from school leaves the country. She becomes obsessed with and stalks her mother’s unusual friend Lisa Goliard who claims to be an artist. However, thinking back, George remembers that her mother suspected Lisa of monitoring her for the security services. Don’t get the impression that George spends all of her time shadowing people and watching experimental French movies from the 1960s; she also travels to London to see the work of Francesco del Cossa, the moody and poetic narrator of the other story.

Francesco is himself seemingly both; a woman in men’s dress and sometimes, vice versa. Standing in front of his portrait of St. Vincent Ferrer, he wanders through his past in a lyrical stream of consciousness. Francesco storms at his ill-pay like a bolt from the blue and gets lost in the depths of his mind, which makes his story more difficult to follow compared to George’s. But there is something in his story; something that pulls the reader into the dreamy world of the Renaissance. When you catch a glimpse of this fantastic world, you are no longer able to step back but let yourself experience his scrumptious narrative. Francesco’s story is nonesuch amongst the British literary canon.

So the book has two parts, two main characters, two perspectives, two socially-oppressed gender identities, two sexual deviations, and two conditions of being-in-the-world. But don’t be deluded by this duality. Ali Smith’s book is not about how to be both, it is about how to be one. It is about the experience of being a human in the world through a span of 600 years; being able to produce and consume, think and feel, and love and lose. As for the bridge between the stories of George and Francesco, a subjective experience of the world proves to be a perfect meeting point. There is no gap between the past and present. There is only one chance for you to live your own story.

Dazzling with its splendid narration, How to Be Both is a book that you can devour at one sitting, but be impressed by throughout your entire life. Recommended to all who wonder what it would be like to be someone else through the power of literature.

Alican Akyüz is a graduate of the M.A. British Studies at the Centre for British Studies, Humboldt-Universität zu Berlin. He is currently pursuing a PhD at the University of Oregon, USA, at the Department of Comparative Literature.