Gesa Stedman reviews Judith Kerr’s illustrated autobiography and finds inspiration in it. The book was published in German to coincide with the author’s 95th birthday.

For German readers, Judith Kerr is best known for her novel When Hitler Stole Pink Rabbit, an autobiographical novel for older children about the Kerr family’s exile in Paris, Switzerland and from 1936 in England during the Nazi period. Anglophone readers who grew up in the 1970s and 80s will be more familiar with her classic picture book The Tiger Who Came to Tea, just out in a 30th-anniversary edition this year. 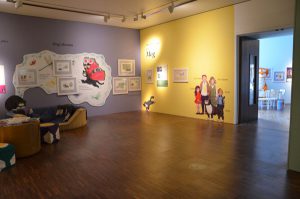 “From The Tiger Who Came to Tea to Mog and Pink Rabbit: A Judith Kerr Retrospective”, exhibition at Wolverhampton Art Gallery (2012) (photo: WAVE: Galleries, Museums, Archives of Wolverhampton)

Readers who would like to find out more about this prolific children’s book author should turn to her illustrated autobiography Creatures. A Celebration of the Life and Work of Judith Kerr (London, HarperCollins). It was published for the first time in German in 2018 (Geschöpfe. Mein Leben und Werk, Cologne, Edition Memoria), the English edition came out in 2013.

Lavishly illustrated and designed like a coffee-table book, it is a very moving account of Judith Kerr’s extraordinary life and career.

Both Judith and her brother Michael had distinguished careers in Britain, while neither of her parents really managed to find a role there. Alfred Kerr was unable to and perhaps also too old to play the role in post-war Britain he had played in Berlin during the Weimar republic. Judith Kerr’s mother returned to Germany after her husband’s death and worked as a translator, but neither of them really overcame the shock of having been uprooted and being largely penniless. It is all the more remarkable that their children did so well. And who would have guessed that Judith Kerr actually failed her graphic design studies in illustration… 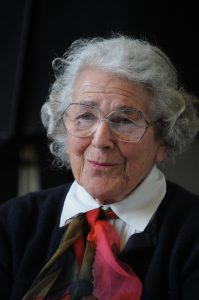 Her wonderful, quirky and ironic book also provides a highly readable account of the early years of the BBC, where she worked and met her husband, the late Nigel Kneale, of the art of making a book in the 1950s and the 21st century and how this differs, of how to overcome technical difficulties, of how to combine an (artistic) career with motherhood, of how to live with eccentric cats, and of many other aspects of the creative life.

But the most memorable parts for me are her early drawings, which her mother preserved and took with them on their hasty flight from the Nazis in 1933, and the dedication of the book: “This book is dedicated to the one and a half million Jewish children who didn’t have my luck, and all the pictures they might have painted.” (p. 173)

Judith Kerr, Creatures. A Celebration of Her Life and Work. London: HarperCollins 2018.