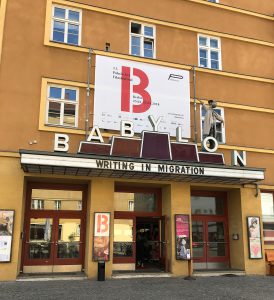 WiM stands for “Writing in Migration”, the first African literature festival in Germany. It took place last week at the Babylon in Berlin. It was organised by the literary agency InterKontinental and curated by Olumide Popoola. Sandra van Lente attended two of the events and wrote a short report for the Literary Field Kaleidoscope.

Writing in Migration, the first African literature festival in Berlin or, as one of the participants put it: a book festival about “African literature, language, migration, decolonisation, identity, privilege, love, humour and change” (tweeted by @TrillaTina) started last Thursday and presented 14 events including a theatre performance by Linda Gabriel and a concert by bbxo until Saturday evening. I attended a panel on curation and the closing concert, talked to some of the authors and participants, and enjoyed the book table organised by Buchhandlung Moritzplatz.

Curating the Conversation, Influencing the Agenda

“You can’t be trusted,” Bibi Bakare-Yusuf lets her Berlin audience know right away. What Europeans picture when talking about African literature only catches a tiny fraction of it. But the members of this panel were here to help. 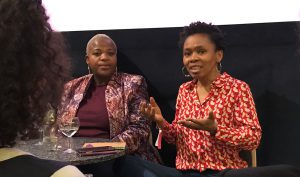 Bibi Bakare-Yusuf, co-founder and director of the renowned Nigerian publisher Cassava Republic, and Zukiswa Wanner, writer, literature project manager, and possibly also future publisher from South Africa, discussed their motivation and the processes behind their curating activities. Shermaine Lovegrove, publisher of Dialogue Books, an imprint of Little, Brown, moderated the panel and added the perspective of the British market.

When Bibi Bakare-Yusuf curates African literature she wants to create a richer archive by filling the gaps. She wants to see the many Africas represented and publishes “what I want to see when I’m long gone”.

Zukiswa Wanner explores how literature can relate to other art forms – and find different audiences at the same time. While she ran a number of programmes, among other things “Read South Africa” and “Artistic Encounters”, her next project will be to start a publishing house, curating African literature from the continent and the diaspora. A special focus of hers is the translation of French and Portuguese texts, as she has often wondered what she was missing because it was not translated.

Judging from the tweets and conversations during the festival, questions of language came up time and again during many different events (as did feminism and (imagined) audiences). Here, too. Yes, English and French and Portuguese are languages of the imperialist past, and with the language comes a specific world view, as Bibi Bakare-Yusuf pointed out. However, when you have over 2.000 African languages or 11 official languages in South Africa alone, “English is so convenient”, Zukiswa Wanner interjected. And Shermaine Lovegrove mentioned the example of Wales, where the measures and programmes introduced to revive the Welsh language also changed “how we see Wales”. A balance between publishing in local languages and publishing in languages that can be read by a large number of people would be ideal, of course – as would more translations.

“The Masses Don’t Necessarily Know What They Want”

Back to publishing decisions. Bibi Bakare-Yusuf pointed out how the act of gatekeeping is often seen as something negative, limiting. To her, however, curation is something positive – as is the creation of a corpus that in 1,000 years from now will be a testimony to plurality. She explains: “I am an engaged intellectual. I feel publishing is the place where I can contribute to change.”

Often, publishers seem to claim that a certain might not sell, that there was no audience. Well, first of all, that’s not true – and a claim much too often used to decline books by POC. Bibi Bakare-Yusuf boldly stated: “The masses don’t necessarily know what they want. But they will like what I give them.” Her publishing house’s success seems to prove her right.

“Europe is obsessed with newness,” claims Bibi Bakare-Yusuf, and all three women on the panel seem to agree that African writing is somehow en vogue at the moment. While a certain amount of curiosity can be a good thing, of course, Bibi Bakare-Yusuf warns us to let the Centres or usual suspects (i.e. UK, USA, and France) determine what African writing was. The dialogue between African cultures, the writing of the African diaspora, all this has existed long before the West thought it was “in”.

Shermaine Lovegrove shared her experience talking to British commissioning editors and publishers who repeatedly claimed that there were so many books by African authors out already. However, when Lovegrove asked these people to name one or two of these authors, they rarely get further than Teju Cole. Another – often dismantled but still used – argument often used is that books by African authors don’t sell (in this context, you might find the “Writing the Future” report helpful: link). One of the best ways to support (not only) African literature – if you don’t want to become a publisher or patron yourself – is to buy the books. The conference did not lack enthusiasts who would share their reading suggestions. The empty book table on Saturday spoke volumes. 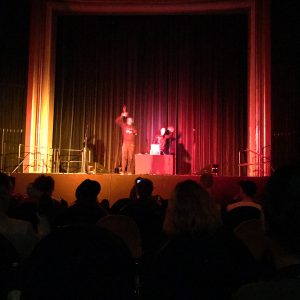 The last act of the festival was the performance by bbxo: Musa Okwonga and Krisz Kreuzer. The music and the texts are an extraordinary combination of political lyrics and sounds and genres. Firestorm, for example, inspired by the rise of right-wing people and movements in so many places at the moment, really takes your breath away. In addition to a number of their songs, Musa recited his poem “What is Black” (link to a performance below).

…
Black is black-and-white, always the extremes, it seems;
Either President or menacing,
Either thief or first-class degree in medicine…
But my black is grey –
…
(from M. Okwonga: “What is Black”) 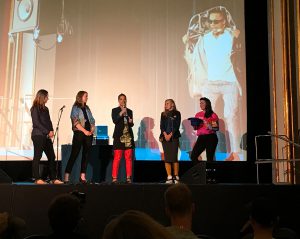 The participants I talked to – publishers, journalists and literature enthusiasts (and, if I may add, not only the usual suspects you tend to meet at Berlin literature events) as well as some of the authors – enjoyed the festival very much. So did the organisers, not only because they managed to make the German disseminators understand and regret that they had a blind spot, but also because of the lively discussions and some controversies their festival created. Anna Gyapjas sums up some of the latter in her article for the Berliner Zeitung (link). In their closing statements the organisers announced that they will continue to challenge their audiences and that there will be another African literature festival next year, so keep an eye out for it at www.interkontinental.com