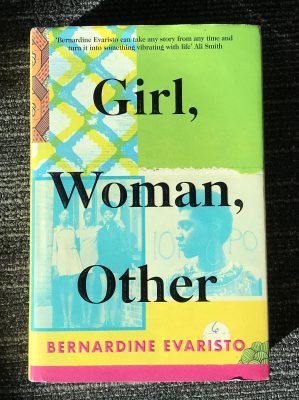 Yesterday, on the evening of 14th October 2019, the Booker Prize judges announced that they awarded the prize to both Bernardine Evaristo and Margaret Atwood. My first reaction was an outburst of joy (and a little dance in front of my phone) – to me she is one of the best authors of all time, in addition to being an amazing champion for other (for lack of a better word) ‘underrepresented’ writers, an excellent reviewer and an important commentator on British society.

But then I wondered… I really don’t want to rain on anyone’s parade, but maybe I do (though not on Bernardine’s). It just left me with a bitter aftertaste that the first time a Black woman wins the Booker Prize, she has to split it with an established white one. I don’t understand how the jury – Peter Florence (chair), Afua Hirsch, Xiaolu Guo, Liz Calder, Joanna MacGregor – could not choose one or the other. But the weirdness goes on: “We both have curly hair”??? COME ON! And the touching? Maybe I’m over-sensitive, but maybe I’m not… And isn’t it interesting how all articles I have seen about this seem to name Margaret Atwood first? Not sure it’s just about the alphabetical order of their last names… If you saw the Guardian’s appalling headline, you know what I mean. At first, I didn’t want to repeat it, but here goes, because it’s so outrageous: “Bookser judges split between huge event novel and obscure choice”. After loads of criticism, they changed it to a milder version, but kept the formulation in the text…

Sunny Singh expressed so much better what I thought, so I’m going to share her thread here, about how Bernardine Evaristo would have deserved to win on her own, how the Handmaid’s Tale “appropriated Black and NBWoC suffering for white dystopia” and how this says a lot about our literary field (it’s a whole thread, you can also read it if you’re not on twitter yourself):

Sorry unimpressed by the split win! Bernie fucking deserved it ON HER OWN!

Not with White Women™️ pulling ‘let’s not be divisive’ shit

To me, Girl, Woman, Other was the obvious choice, not an “obscure” one.
So I congratulate Bernardine Evaristo with all my heart and focus on this: