Happy Publication Day! Today, V&Q Books officially launches its first book: Paula by Sandra Hoffmann, translated by Katy Derbyshire – the first in a hopefully long series of English translations of German books (www.vq-books.eu). The launch will be held at ocelot, not just another bookstore. It’s invitation only, but you can participate via the live stream on Instagram Live (@ocelotberlin; today, 15 September, 8pm). If you’re interested in a sneak preview, here is what Katy did for #TranslationThursday in July: link to her reading on youtube.

Katy Derbyshire is a translator as well as the mastermind and publisher behind V&Q Books. She translates contemporary German writers, including Olga Grjasnowa, Heike Geissler and Booker-nominated Clemens Meyer. She co-hosts Berlin’s monthly translation lab and the bi-monthly Dead Ladies Show (link to the Dead Ladies Show). Katy kindly agreed to answer some questions for Literary Field Kaleidoscope: 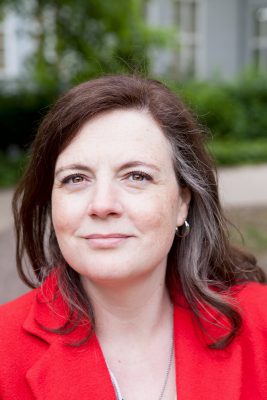 Katy, congratulations on your launch of PAULA, written by Sandra Hoffmann and translated by you – and of course also the launch of your new imprint V&Q Books!
Can you tell us a bit about V&Q Books?

We’re based in Berlin, a subsidiary of the German indie Voland & Quist. We’ll be publishing about five books a year, all what we call “remarkable writing from Germany”. That means books that stand out and were written here, mostly but not only in German. They’ll have a strong sense of place, but that place won’t necessarily be Germany. And we’re aiming them squarely at British and Irish readers.

It is quite a challenge to find the exact numbers of translations into English, but it’s a truth universally acknowledged that the German literary field translates more from English than is translated by e.g. UK publishers from German. Which is really a pity, as many British friends tell me who can’t read German and feel that this part of the world is closed off for them.
What made you want to start your own imprint for English translations of German books? And who do you hope will read your books?

It was very much that same sense of frustration, coupled with literary evangelism. I felt there were so many outstanding books that weren’t making it through the needle’s eye of translation into English. So I wanted to widen that eye, even if only the tiniest bit. I was scared Brexit might make the UK even more parochial; obviously, books won’t necessarily change anyone’s mind, but I wanted to make something for “the 48%”.
We’ve tried to choose a fairly wide variety of books, some very literary and some more accessible. And because so little gets translated – and we have good connections inside German publishing – we managed to buy the rights to a couple of bestsellers and booksellers’ favourites, even though we’re a new imprint. So I’m hoping all sorts of people will read them, from literary pundits to library addicts.

What made you choose Sandra Hoffmann’s book PAULA as your first publication? What was the translation process like and what did you find particularly challenging? I worked closely with Sandra at the British Centre for Literary Translation’s summer school in 2018, translating extracts from PAULA. It was a real challenge for everyone in the group, and at the same time very rewarding – a very personal book, rich in description, which sounded great in English too. It centres around a family silence, one of the main translation difficulties because we simply don’t have the right word in English, where German has a verb meaning deliberately maintaining silence. But once I’d worked that out, things slipped into place. Even though it’s a unique story – of Sandra’s relationship with her Catholic grandmother, who refused to reveal the father of her child – it felt very relatable, raising questions about identity and belonging, and the language just sings.

If I might add a small comment: I really love Katy’s “Translator’s Note” at the end of the book, explaining some of the challenges and her choices (DAUGHTERS by Lucy Fricke, translated by Sinéad Crowe and also published by V&Q Books also has one – I just love them). Make sure you don’t miss it!

What genres are you focussing on and why?

The focus is a mix of literary fiction (because it has an established readership in translation in the UK and because I love it) and books slightly closer to popular fiction (because we can, and in the hope that we sell lots and lots of copies and persuade British and Irish readers that translations aren’t scary).

I’m intrigued by your statement that you’re translating from German and “other languages written within the country” as well as “English writing produced in Germany”. This sounds like such a rich pool to choose from. How do you select which texts to translate and publish? How important is it for you to have a balance between perspectives, e.g. in terms of gender, race/ethnicity or cultural background?

I’ve been campaigning to get more women translated for several years, so obviously gender is key, as a contribution to correcting the imbalance. And I’ve always been drawn to writers from working-class backgrounds, like all three in our first season. Another thing that’s important to me is presenting a less clichéd image of Germany, so fewer old white men and fewer stories about Nazis. We’ll be doing a book by the Berlin-based Croatian writer Ivana Sajko, and keeping our eyes out for more from different languages. Next spring we’ll publish only the second ever novel of Turkish migrant workers in English translation, Selim Özdogan’s THE BLACKSMITH’S DAUGHTER, part one of a trilogy which I hope will whip up a fervour of enthusiasm. German publishing is only gradually discovering local writers of colour – they’re good at importing significant writers, but not so good, historically, at fostering people of colour writing inside Germany. And that means even less gets translated. A friend recently asked me for a list of German women of colour published in English translation, and what I came up with was shockingly short. I assume every publisher wants to put together a well-rounded catalogue, and we have a lot to work with here.

Do you feel that this whole Brexit mess has had an impact on the number of English-writing creatives who moved to Berlin or Germany? And is your domain suffix .eu a deliberate statement?!

I think Berlin has always been an attractive destination for creative Anglophones, and now it’s their last chance for a while. In the past I’ve seen people come and go, but now they don’t seem to be leaving – and who can blame them? One recent innovation that’s hugely attractive is the city’s grant for writers, which gives ten people working in languages other than German a big fat €24,000 each over a year. The city is starting to take writers seriously, although it’s not wooing them quite as hard as it is tech start-ups and billionaire art collectors.
The .eu suffix is part pragmatic (.com was no longer free…) and part deliberate statement, definitely!

What are your plans and hopes for your first year with V&Q Books?

Under the circumstances, my plans have shifted away from world domination, massive book tours, major press coverage. I hope we can get through to readers in a crowded market, I hope people notice what we’re doing and like it, and I hope they walk into bookshops in Cork and Cardiff and see our books on display and think: This looks good, I’ll buy it for myself and maybe pass it on to my cousin. If conditions allow, though, my big dream would be to go on a spring tour with our writers and translators, Dublin, Glasgow, Manchester, London, and introduce them to our friends and families and interested readers. 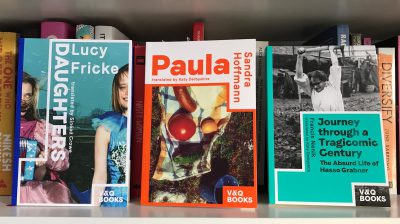