Gesa Stedman is surprised that The Year of the Runaways received so much praise and a Man Booker Prize shortlist nomination in 2015. The novel is compelling but panders to middle-class emotional requirements. 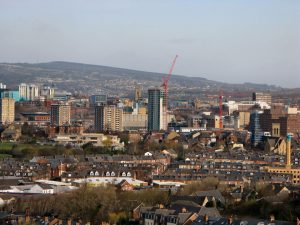 Sunjeev Sahota’s second novel tells the story of three Indian men, Tochi, Avtar and Randeep, and one woman, Narinder, and how they manage to get to the UK, and stay there. Set in the Sikh community, we hear how the men get the money together – by donating a kidney in dodgy circumstances, borrowing money from usurers, working three jobs rather than just one – and how they avoid being deported and detected once they have arrived in Britain. The men live in shared “accommodation” which is squalid beyond belief. They work in construction or in the kitchen of Indian restaurants, are short of food, money, women, and only form a bond by way of necessity. It is a dog-eat-dog world, in particular since there is no work to go round, and some of the young men end up being homeless, with only a little support from the local Sikh temple. One of the young men has come on a marriage visa – married to Narinder who is actually engaged to someone else – but none of them can really make a living.

While the descriptions of life in Sheffield for male Indian migrants is caught in all its terrible detail, and affects the reader, the representation of women is less convincing and often clichéd. It is a good idea of course to make white middle-class readers aware of what it really means to live in the UK as a largely illegal migrant or one with only a limited visa, no job and no prospects but the hopes of all the family back in India depending on you. Characterisation unfortunately is not the author’s strongest point but that would have been forgivable if he had been brave enough to follow his plot to the end.

Instead of having at least one of the young men deported, another killed by the complications following the dangerous removal of one kidney in unhygienic circumstances combined with hard physical labour, and the third disappear into homelessness, the visa-wife sent back to India in disgrace or otherwise physically abused by her violent brother, Sahota presents us with a happy end. All three young men have made it in a way. Only one has returned to India, to find a loving wife with whom he has two children. The visa-wife, although single, survives, and the two others actually make a life for themselves in Britain and are able to bring their families across from India. Even the English migration-abuse detectives from the Home Office are harmless! This is a sop to middle-class readers, and should have been avoided at all cost. In the end, everyone can sit back and say “well, it is possible to survive in crisis Britain, even as an (illegal) migrant, hard work will do it, and anyway, the odd Indian Sikhs and their codes of honour and their caste system have nothing much to do with us anyway”. A chance to force readers to face reality has been missed here, and a chance to tie individual lives to the bigger picture of global neoliberal economic forces without falling into the usual happy-end-plot-trap. I am not sure I want to agree with Salman Rushdie “All you can do is surrender, happily, to its power” (front cover) since that would mean we surrender to that kind of plot.

A portrait of the author can be found here: https://www.theguardian.com/books/2015/dec/12/sunjeeva-sahota-books-interview-the-year-of-the-runaways (last access 20 March 2017).