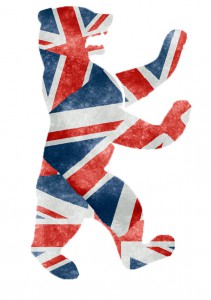 In this review article, Jürgen Enkemann comments on the three British movies screened at this year‘s Berlin International Film Festival, the Berlinale 2017. They feature love and deceit, gentrification and midlife crises as well as a historical fight for independence. However, it seems as if previous contributions were stronger than the ones in this round.

Three films represented British Cinema at this year’s Berlinale: Danny Boyle’s T2 Trainspotting and Gurinder Chadha’s Viceroy’s House as well as Sally Potter’s The Party. While the former two were screened out of competition, only Sally Potter’s The Party was among the films competing for the Golden Bear and will be reviewed in more detail than the other two films.

Before commenting on the film itself it may be worth mentioning that director and screenwriter Sally Potter is not a newcomer at the Berlinale. She had already taken part in the competition in 2009 with her film Rage starring Jude Law and Judi Dench among others. At that time she was already well known as a British director of feature films. Her first great success was Orlando (1992), an adaptation of a novel by Virginia Woolf with Tilda Swinton as the main actress.

The Party, “a comedy wrapped round a tragedy“

The Party, starring Timothy Spall, Kristin Scott Thomas, Bruno Ganz and Patricia Clarkson, has been described by its production company Adventure Pictures as “a comedy wrapped round a tragedy“. The audience is indeed confronted with a number of painful personal experiences and dark outlooks but cannot help laughing most of the time because of a speedy series of funny events and witty comments during the course of a party that takes place in a townhouse appartment. The film is shot in black and white never moves to any other area.

“We did it,“ are the first words to be heard at the beginning of the film. They are spoken by Janet and refer to the crowning achievement of her political career since she has just been appointed health minister in the shadow cabinet. Her party is never specified but one can assume that it is Labour since Janet is a defender of the National Health Service. She and her husband Bill, a former classicist professor, celebrate her success with a few guests who arrive gradually at their home in London. Although it seems to be a gathering of close friends who all belong to the realm of intellectuals and experts and share a vague liberal left-wing stance, it is nevertheless a very heterogeneous circle which in its curious mixture adds to the comic effect and an atmosphere of absurdity.

There is, to give some examples, Bruno Ganz in the role of Gottfried, a kind esoteric German who recommends Voodoo spiritual practices and natural remedy to cure Bill’s illness. Then there is a lesbian couple, Jinny and Martha, who talk about the correct degree of radical feminism these days, but a more immediate problem is that Jinny is pregnant and expects triplets. Martha who learns about this during the party night is afraid that Jinny might neglect or give up their partnership once she has become a mother of three children. And there is Tom, a cocaine-consuming banker and shark who hides a pistol in a drawer, starts quarreling with Bill in the final part of the comparatively short film and knocks him down.

But notwithstanding all these differences and individual peculiarities there is a common denominator to be associated with a lack of confidence and truthfulness. Everyone is in disguise, but the characters’ deceitful behaviour towards each other is in some cases disclosed in an explosive way. The first who drops a bombshell is Janet’s husband Bill. He first tells her that his illness, according to a recent medical diagnosis, cannot be cured and then informs her that he is going to leave her in order to live with the woman he is having an affair with.

Janet’s friend April, who accompanies the events of the evening as a witty truth-telling commentator, connects the theme of truthfulness explicitly with the sphere of party politics. “Pretending hasn’t worked for your party for a while,” she tells Janet. This critical remark reflects one of the points Sally Potter emphasized during a press conference at the Berlinale after the first presentation of The Party. She started writing the script, she said, just before the last general election in Britain “at a point where it seemed that the left in the UK was very much losing its ability to be sincerely brave about its policies and was trying to disguise itself as something very centrist“. She also referred to the political atmosphere and the debates within the parliamentary parties around the Brexit when her film was shot. “It was the feeling that people were losing political life,“ she said, “losing the ability to even know what the truth was. That’s why truth-telling is so central to the politics in this story, all kinds of truth-telling in personal life and political life.” So the film was, she said, mainly a political statement and a “light and loving look at the state of England, of a broken England.”

For the audience it was a very enjoyable film and also a most unusual one with such a great number of comments and activities pressed into a plot of 71 minutes which made The Party the shortest film of the competition. It was also unusual in its simple structure and the avoidance of setting changes and special effects. This created the impression of a one-act stage play rather than a ‘normal’ feature film. These confinements including its fixation on one political phase and offering only a limited message may perhaps mean that in spite of its brilliance as a satirical sketch it won’t go down in cinema history as one of the great memorable films.

Danny Boyle’s T2 Trainspotting is a late sequel to his Trainspotting which became a cult film twenty years ago with horror scenes of intravenous heroin use or dead babies crawling across ceilings, but also of young people outside the established social system becoming close friends, gaining a voice and appearing as empowered characters rather than downtrodden losers. Danny Boyle brought the old crew together including Ewan McGregor, with whom he had quarrelled for a long time, and the new film, based on Irvine Walsh’s novel Porno, is set in Edinburgh again. The Berlinale programme journal asks: “Did Renton really start a family, buy a car and a washing mashine as he proclaimed at the end of Danny Boyle’s successful cult film?“ Well no, this is not the case in the sequel. Instead, we are confronted with a midlife crisis, heart attacks and other problems in a gentrified Edinburgh. There is also a dark underworld story driven by extortion, prostitution, addiction and revenge, but friendship and pleasant memories feature, too. The film is well made and all in all a worthy continuation of its forerunner; it includes some of its roughness and cannot be seen as a betrayal to the sacred original.

In Viceroy’s House, Gurinder Chadha, a director well remembered for very successful films such as Bend It Like Beckham and Bhaji on the Beach, turns to events in India in 1947, when British colonial rule came to an end. Queen Victoria’s great-grandson Lord Mountbatten moved into the Viceroy’s house in Delhi with his wife and daughter for six months in order to oversee the country’s transition to independence. The film is partly a historical account of the 1947 Partition of India into Muslim Pakistan and secular India after violent conflicts between Hindus, Muslims and Sikhs; it is partly a love story between two members of different religious communities in the Viceroy’s house and partly a critical reflection of the political role Mountbatton played. In addition, there are more aspects to the movie that cannot be dealt with here at the moment. Gurinder Chadha had a special relationship to these historical events, being a descendant of a family who was involved in them. In a more extensive review, it might be worth to question whether the romantic attachment in the rooms below the powerful institution represented by British Royality, i.e. a story that symbolically serves to relate the human consequences of the Partition, is really capable of giving an adequate impression of the wider dimensions of those historical processes.