Gesa Stedman listens to the radio, worries about giving up air and review space in favour of infotainment, questions the relation between politics and aesthetics, and once again looks at bookselling during the pandemic.

The year began with cheering news: the overall winner of the Costa Awards. The winners in the different categories – first novel, children’s book, biography, and poetry can be found here: link to awards page https://www.costa.co.uk/behind-the-beans/costa-book-awards/book-awards (last access 7 Feburary 2021)

The overall Costa Book of the Year was won by Monique Roffey for her sixth novel, The Mermaid of Black Conch. Although I must admit the jury’s comment that reading it felt like already knowing the story (see below) made me doubt whether this particular title matches my taste, it was another success for the independent publisher Peepal Tree Press (link to author’s page https://www.peepaltreepress.com/authors/monique-roffey last access 12 February 2021) and it shows that crowdfunding campaigns for ‘small’ books can work.

[Chair of the judges, historian and broadcaster Suzannah Lipscomb]

said the judges deliberated for three hours before choosing Roffey as their winner. “The novel feels like one of those stories you think you must have known before, because it already feels like a classic,” she said. “The mermaid is pulled out of the sea in this really arresting scene that, pun fully intended, hooks you in the novel just as much as she is hooked by the fisherman. And then it’s a question of whether she could become a woman again, and live in a modern Caribbean society and all the questions that raises. When we think of mermaids, because of Disney we think of fairytales, but this is a visceral mermaid – as she becomes a woman parts of her tail fall off and she smells. It’s very evocative in terms of the physicality.”

There seems to be a definite trend in prizes at the moment which are awarded not to the very established writer but to different voices. Monique Roffey is an established writer, but not someone who writes for the masses. The same goes for the latest Booker winner Douglas Stuart, whose debut novel about life in working-class Glasgow Shuggie Bain won the prize in 2020, the winner of the 2020 Goldsmiths Prize M. John Harrison, and other similar cases. Diverse juries seem to produce at least slightly more diverse prize winners. Reviews of some of the award-winning titles will follow throughout the next months. 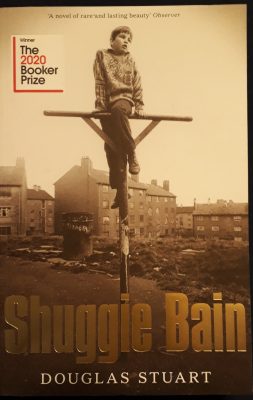 The Christmas bestseller, always a hotly contested position, went to first-time writer Richard Osman for The Thursday Murder Club. This surprised me a bit, because after last year’s sales figures, it could have been a cookery book again. Out of last year’s top 50 authors, 10 are cookery book writers… (The Bookseller 22 January 2021, p. 7). Osman is still high up in the charts, for both audio/e-books and print. In general, figures for bookselling are pointing upwards in spite of the fact that many countries are once again in lockdown and only a few counties or Länder like Berlin have opted for open bookshops, arguing that they are necessary and relevant. 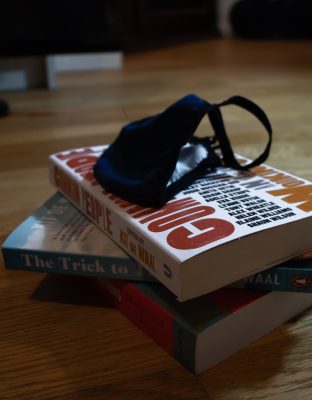 Others simply have been inventive enough to sell books through click and collect, through their own online sales shops or by delivering them by hand. It is therefore good news that the number of indie bookshops in the UK, always under threat, has risen rather than fallen in the past 12 months. Details of last year’s trends will follow in my overview of 2020.

With pandemic conditions and lockdowns, many people continued to read, and to inform themselves about new (or old) books. One format which is increasing in volume is that of the podcast, produced both by amateurs and professionals. In this rather short Book News, I would like to draw your attention to a new podcast by radio producer Clarisse Cossais and her colleague Sigrid Brinkmann. Littéramours is broadcast in German and French, and looks at contemporary French literature.

As radio producers and trained journalists, Cossais and Brinkmann have opted not for the chatty, humorous style of podcasting favoured by many younger listeners, but have gone more for the long interview with which one is familiar from radio features. The podcast can be found here: link to the podcast https://www.podcast.de/podcast/949013/ (last access 7 February 2021).

A combination of both interviews and chats can be found on Radio 1, Die Literaturagenten, which is broadcast every Sunday evening. It does not deal only with recently published German-language  literature but with international titles in translation and is thus useful for people from any nationality, provided they can follow the German hosts. In the past few weeks, featured titles included books by Clarice Lispector, contemporary French authors writing about Berlin, a semi-autobiographical novel by a local and quite contentious Berlin newspaper columnist, as well as Hilary Mantel and T.C. Boyle. Their feature can be heard here:

That diversity has finally also entered the German book market has been visible to observant readers for a while. But apparently, in spite of authors such as Sašha Stanišić winning prizes, debut authors such as Deniz Ohde being the runner-up for last year’s Deutscher Buchpreis with her novel Streulicht, the anthology Eure Heimat ist unser Albtraum (edited by Fatma Aydemir and Hengameh Yaghoobifarah), the review pages and broadcasters seem to take longer to catch up. Why this may be the case, and how useful or useless labels such as “authors with a migration background” (Migrationshintergrund) are or not, is debated in an important podcast on Deutschland Radio Kultur. Christine Watty and Kathrin Rönnicke discuss these issues in depth with writer Mithu Sanyal und literary critic David Hugendick. Link to broadcast https://www.deutschlandfunkkultur.de/diversitaet-und-deutsche-gegenwartsliteratur-wie-bespricht.3717.de.html?dram:article_id=490820 (last access 7 February 2021).

That books on public broadcasting are becoming an endangered species can be learned from a debate sparked off by the German radio company WDR, a public service broadcaster. They announced in an email they would be reducing the space for book reviews. This has unleashed a justified storm of criticism. It is not simply unhappy reviewers or publishers clamouring for attention. The problem is much more serious: if one leaves the discussion of language, of words, of how to understand the present as well as the past to private radio and social media companies with their tendency towards the simple, entertainment and at worst, right-wing discourse, then the space for right-wing, anti-Semitic, racist and in general anti-democratic cultural production will grow immensely, as Felix Stephan argued in Süddeutsche Zeitung. Link to paid content at Süddeutsche Zeitung https://www.sueddeutsche.de/kultur/wdr-oeffentlich-rechtlicher-rundunk-kulturauftrag-kuerzungen-verleger-umfrage-1.5190054?reduced=true (last access 7 Feburary 2021). Cultural politics is not simply about air space, rather, it concerns the question who will win the battle about hegemony. If one reads the subtle, clever and schooled by left-wing tactics cultural politics of the AFD correctly, then this is their intention. If democratic organisations give up of their own accord, the AFD and their supporters win even more easily than they do anyway. As their voters have the highest percentage of overt and latent right-wing and anti-Semitic convictions compared to all other parties – worringly, the CDU figures match those of the Left Party – giving up space does not bode well for the future. Quite apart from the damage done to book sales!

Whether, however, one does books a service by making political statements rather than artistic ones is a different matter. I am not sure that the long interview with Bernadine Evaristo, whom the German reviewers and readers have begun to discover in the wake of her Booker Prize win in 2019, in the magazine of Süddeutsche Zeitung was such a good idea. 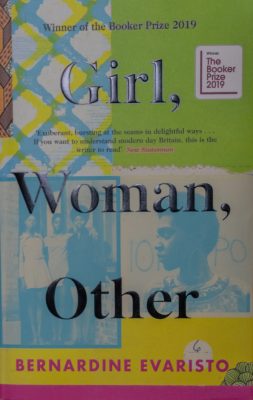 If focuses almost entirely on the politics of her latest novel Girl, Woman, Other and leaves little space for aesthetics, although the interviewer Maike Nieberding tried her best (Süddeutsche Zeitung: Magazin 2, 15 January 2021, pp. 22-25). It is understandable that Evaristo wants to use her newly-found power but I am not sure this will convince sceptical readers. It might even play into the hands of those white middle-class readers who think books by Black or working-class writers are not for them, as they are not Black or working-class themselves (see The Bookseller, 15 January 2021, 14-17, in particular p. 15). My problem is a different one – I like my politics to be transmitted more subtly than both the novel and the interview allow – but then, as a privileged white professional reader my position is certainly not the only one, as one of my younger colleagues who teaches Girl, Woman, Other rightly pointed out to me.