Hannah Pardey, lecturer and researcher at Leibniz-Universität Hanover, is an expert on the digital aspects of the contemporary literary field. She explores in what way digitalisation enables or hinders literary diversity and takes a close look at the intersection of AI, emotion, and diversity.

Avid readers of the Literary Field Kaleidoscope, including myself, are well acquainted with at least some of the factors that curb the diversity of the literary field in the UK and beyond: conglomerates like Penguin Random House, profit maximisation and risk aversion or the dominance of white and middle-class editors, marketing agents and audiences come to mind. What seems as yet unclear is to what extent and effect those players that have emerged with the proliferation of the commercial internet since the new millennium transform the Anglophone book market. Representing the indecisiveness that informs popular and scholarly discourses about the issue, the contributions by the blog’s hosts assign an ambiguous position to companies like Amazon, indicating that these either exclude or enable diverse publishing schemes. Providing an overview of “Recent Trends and Developments” (2016, link, last access 25 March 22) in the UK literary field, Gesa Stedman points to the devastating impact of the world’s leading online retailer whose ridiculously low-priced books and e-books have caused the downfall of independent bookshops and public libraries. Similarly, Sandra van Lente’s article “A Book is a Book is a Book?!” (2013, link, last access 25 March 22) demonstrates how Amazon’s Kindle has ensured the company’s supremacy on the e-book market and, by implication, the control over what and how an ever-increasing number of customers read. Her interview-based report Rethinking ‘Diversity’ in Publishing (2020, link,  last access 25 March 22), which was co-authored with Anamik Saha, in turn, suggests that the World Wide Web offers highly promising means of diversifying the Anglophone literary field, its authors and its readers, in terms of race and class.

The potentially decentralising and democratising consequences of digitisation, which are evoked in Saha and van Lente’s empirical study, are particularly (though not exclusively) reinforced by literary and cultural studies scholars with an interest in how digital technology refashions literary production and consumption. In her survey of The Digital Literary Sphere (Johns Hopkins UP, 2018), for instance, Simone Murray contends that the use of social media allows writers to circumvent conventional gatekeepers and establish more immediate communication channels with their audiences. Researchers of Anglophone African literatures like Shola Adenekan (African Literature in the Digital Age, James Currey, 2021), moreover, who concentrate on the online production of poems and short stories in “the most digital hubs on the continent” (8), i.e. Kenya, Nigeria and South Africa, argue that digital networks foster “new forms of expression” that are “ideologically different from what is published in the mainstream of print publication” (10). 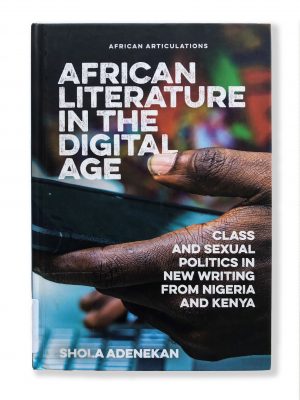 These interventions are significant because they challenge any conceptions of the internet as detached from space and material. However, considering the all-pervading economic power structures set up by a mere handful of US-based digital corporations, one may wonder whether postcolonial critics like Adenekan over-emphasise the subversive thrust of the digital economy.

Digital Capitalism: The Buisness Model of the GAFA Companies

My perspective on the commercial internet and its influence on the Anglophone literary field builds on the socio-economic perspectives developed in Philipp Staab’s Digitaler Kapitalismus (Suhrkamp, 2019) or Shoshana Zuboff’s The Age of Surveillance Capitalism (Profile, 2019), among other recent publications. Staab’s notion, in particular, lends itself to consider the material backdrop of the digital pathways that BAME or postcolonial literatures take. Seeking to capture the structural transformations of capitalism in the internet era, the German sociologist argues that the GAFA companies, i.e. Google, Amazon, Facebook and Apple, do not merely dominate but rather construct themselves as privatised markets that control more and more areas of production and consumption. What distinguishes these monopoly-like corporations from the capitalist endeavours of other companies is that they are relatively unproductive. Instead of seeking to produce things in resource-efficient ways, they continually improve and expand their digital services to gain control over both the supply and demand side. Similar to the potentially inexhaustible goods that are traded on the financial market (such as credits, derivates, shares), digital products like algorithmic software or AZW and MP3 files, which serve to manage the transactions between producers and consumers, generate extremely low marginal costs which stand in notable contrast to the high fees that the GAFA companies charge for operating as markets. To provide an example, in 2021, Amazon earned more than 31 billion US dollars from advertising revenues, i.e. from selling the data of and thus the access to their users to producers. 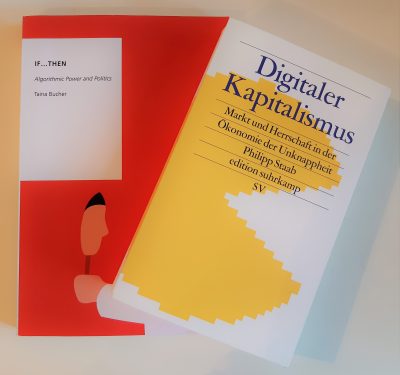 Affective Algorithms: The Demand Side

Considering that user data constitute the key capital of the GAFA companies, it does not surprise that they invest considerable amounts of their revenues in the development of innovative digital goods and services. These investments primarily serve the establishment and control of what Staab refers to as closed socio-technical ecosystems that render the shift to other ecosystems and their digital services virtually impossible. Whoever reads his or her e-books on Apple’s iPad will have a hard time switching to Amazon’s Kindle without losing his or her personal files, notes and highlights. As it ensures the retention of and thus the exclusive access to their users, the steady improvement of their ecosystems and their underlying algorithms is of vital importance for Amazon and others. Attesting to their various uses and profiteers, algorithms have sparked critical (and not so critical) commentary in academia and beyond. Listing a number of common definitions – “a type of technology”, “a step-by-step instruction”, a “code that tries to accommodate personal interests” or “an appetizer to make you crave for more of the same” (19) –, media studies scholar Taina Bucher argues that computer scientists and marketing agents conceal that algorithms “prescribe certain norms, values, and practices” (4) and thus generate power hierarchies. Bucher’s work belongs to a quickly emerging research field called critical algorithm studies. Instead of exploring the technical properties of algorithms, its representatives investigate the socio-cultural effects that algorithmic systems yield. While Bucher’s study If … Then: Algorithmic Power and Politics (Oxford UP, 2018) scrutinises how algorithms create “the conditions through which people come to speak and connect online” (158), Safiya Umoja Noble’s Algorithms of Oppression (New York UP, 2018) illustrates that algorithmic systems can “reinforce oppressive social relationships and enact new modes of racial profiling” (1). Both approaches inspire a closer look at the socio-cultural values and practices which are inscribed in those algorithms that structure online literary marketing.

Picture the online experience of someone who wants to buy Chimamanda Ngozi Adichie’s Americanah (2013) on Amazon. Before concluding the transaction, he or she is presented with a list of other books which, bearing the title ‘customers who viewed this item also viewed’, includes further publications by Adichie, novels by other Nigerian diasporic writers like Ayobami Adebayo and Chigozie Obioma or novels by commercially successful BAME authors like Bernardine Evaristo and Zadie Smith. The collaborative filtering algorithms of Amazon, which are “based on the assumption that customers who share some preferences would also share others” (Bucher 154), not only ensures that the customer in the above example reads “more of the same” (Bucher 2). They also encourage a way of approaching these and other novels that follows the social and emotional consumption model of the middlebrow. At least, the emotional response patterns of Amazon customer reviews as well as the formation of affective reading communities on Goodreads (owned by Amazon), Facebook or YouTube testify to the claim of Amazon’s founder and former CEO, Jeff Bezos, that algorithmically generated recommendations help you locate “your electronic soul mates” (qtd. in Murray 70). 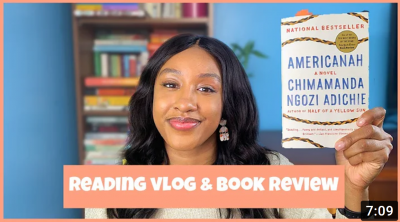 Screenshot of “Americanah” being promoted on a booktube channel
photograph: Hannah Pardey

Repetition and Variation: The Supply Side

While the US-American sociologist Zuboff describes algorithmic systems as surveillance instruments that govern both the purchasing decisions and consumption behaviour of internet users, Staab highlights that the business models of the GAFA corporations exceed the control of the demand side. Accordingly, employing digital technology in order to nudge customers towards certain paths of consumption or secure exclusive access to user data is not an end in itself but only becomes profitable when used as a bargaining chip with those on the supply side, such as publishers. From the perspective of publishing houses, gaining access to the reading tastes of millions of internet users and having their titles integrated into the algorithmic systems of an online retailer like Amazon is a question of survival. Unsurprisingly, digital companies capitalise on this dependency. Visibility on the Amazon page hinges on whether or not publishers are able or willing to pay the ever-increasing co-op fees that Amazon demands. While small and independent publishers can hardly afford the money, the Big Five are also under pressure. As the journalist George Packer states in his New Yorker article “Cheap Words” (2014, link, last access 25 March 22), in 2014, Penguin Random House paid no less than 53% of its annual revenue for Amazon’s advertising services. Such power hierarchies, it is easy to see, do not promote narrative diversity but rather foster the repetition and variation of commercially successful generic patterns. Yet another Bildungsroman, yet another representation of black female middle-class identity, yet another happy ending.

How to Bypass Amazon’s Privatised Market?

Evoking a second meaning of her monograph’s title, Bucher reminds us that algorithms do not merely condition internet users but rather suggest a conditional or reciprocal relation between human and non-human actors: “If the machine is involved, then people are too” (159). In other words, if algorithms are grounded in our consumption behaviour, then we can try to behave differently and at least challenge Amazon’s closed literary ecosystem from within. We can also do this from without and buy our novels in local bookshops or in the online shops of independent booksellers. The experience may be less tailored to our personal reading history. However, the scenario bears the possibility of a “happy accident” or a “freakish discovery” (200), as the former Amazon editor James Marcus puts it in Amazonia (The New Press, 2005). In the end, we may gain a sense of reading and supporting authors outside and beyond the middle-class structures of feeling that dominate the digital literary economy.

Hannah Pardey is a lecturer at the University of Hannover (Germany). She is currently working on a book that investigates the material conditions of producing, distributing, and consuming the new Nigerian novel online.