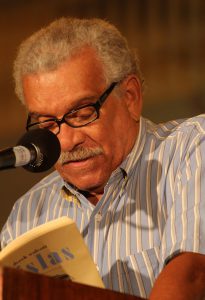 Derek Walcott has died at the age of 87 on the Caribbean island of St Lucia. He was one of the best-known Caribbean writers, famous for his poetry and his plays. He published about 20 poetry collections and 30 plays and was awarded the Nobel Prize for Literature in 1992 and the TS Eliot Prize for Poetry in 2011 – to name just two of the numerous awards he received for his work.

Derek Walcott also taught at a number of American and British universities and directed his own plays, but he is best known for his own literary works. His most important work is the verse epic “Omeros”, an adaptation of the Trojan war epic which reimagines the central conflict as one between Caribbean fishermen. Walcott’s writing is characterised by the sense of dialogue he creates between Caribbean art, literature, and culture, and the Western literary canon. As fellow poet Sean O’Brien comments on the extraordinary character of “Omeros”: “it’s fundamental concerns is to give an account of the simultaneous unity and division created by the ocean and by human dealings with it.” (via poetryfoundation.org (link))

For a more complete obituary, see the following links, as well as the blog Repeating Islands which comments on Caribbean culture, literature, and the arts.

An account of the funeral service can be found here: (link to the Repeating Islands blog post)

And German voices comment on Walcott’s life and work here: