Second novels are often a difficult transitional achievement. Our reviewer Taylor Hebert was disappointed by Eimar McBride’s The Lesser Bohemians. During a pandemic, it reminds us of the cultural world as it used to be but whether nostalgia coupled with laboured stylishness will help us through these times is questionable. 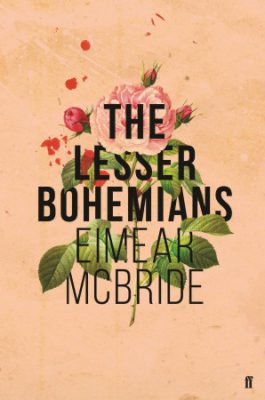 Eimear McBride’s debut novel, A Girl is a Half-Formed Thing, was consistently praised as revelatory, harrowing, and life-changing. I willed The Lesser Bohemians to be the same. But just as the second time looking up in the Sistine Chapel will never be as magical as the first, I found McBride’s second novel falling short, and into some unfortunate pitfalls.

McBride’s prose adopts her signature style of writing. Her poetic soliloquies allow us to delve deeply into the mind of our protagonist, who, similar to A Girl is a Half-Formed Thing, is an unnamed, emotionally tormented adolescent Irish girl struggling to cope with current life in the shadow of a dysfunctional past. While I do not object to art imitating life, I found biographical parallels harder to ignore than McBride’s first novel. The Lesser Bohemians follows this young woman in her move to London to attend drama school in the mid-1990s. Eimear McBride herself moved from Ireland to London to attend drama school in the mid-1990s. This setting of nineties ‘Cool Britannia’ London felt timely, as it seems so far from the Post-Brexit London of today. The nostalgia for that time is palpable – in line with all cultural nostalgia that seems to run at parallel twenty-year intervals.

Though stylish, this felt predictable. McBride captivates the reader with her composition and style so much so that they can fully immerse in the narrator’s portrayed experience. At best, this allows the reader to ride along for the fleeting scenes of a drunken night out. At worst it makes one privy to the tedium of an unfulfilling sexual encounter. It is a style that has been compared to the likes of her Irish antecedent, James Joyce. Compared to the universality and connectivity that Joyce’s stream of consciousness evokes, the device employed in The Lesser Bohemians feels undeniably narrow. Perhaps this selfish or narrow tone comes from being inside the mind of an eighteen-year-old girl – a state I could never be paid enough to return to. With McBride’s at times labouring language, I was held captive inside this unlikeable character’s mind for much longer than I originally bargained.

Taylor Hebert is an aspiring writer, welsh-cake enthusiast, and current student in the MA British Studies programme at the Centre for British Studies, Humboldt-Universität zu Berlin. She is currently working on a thesis reconsidering violence in British drama.